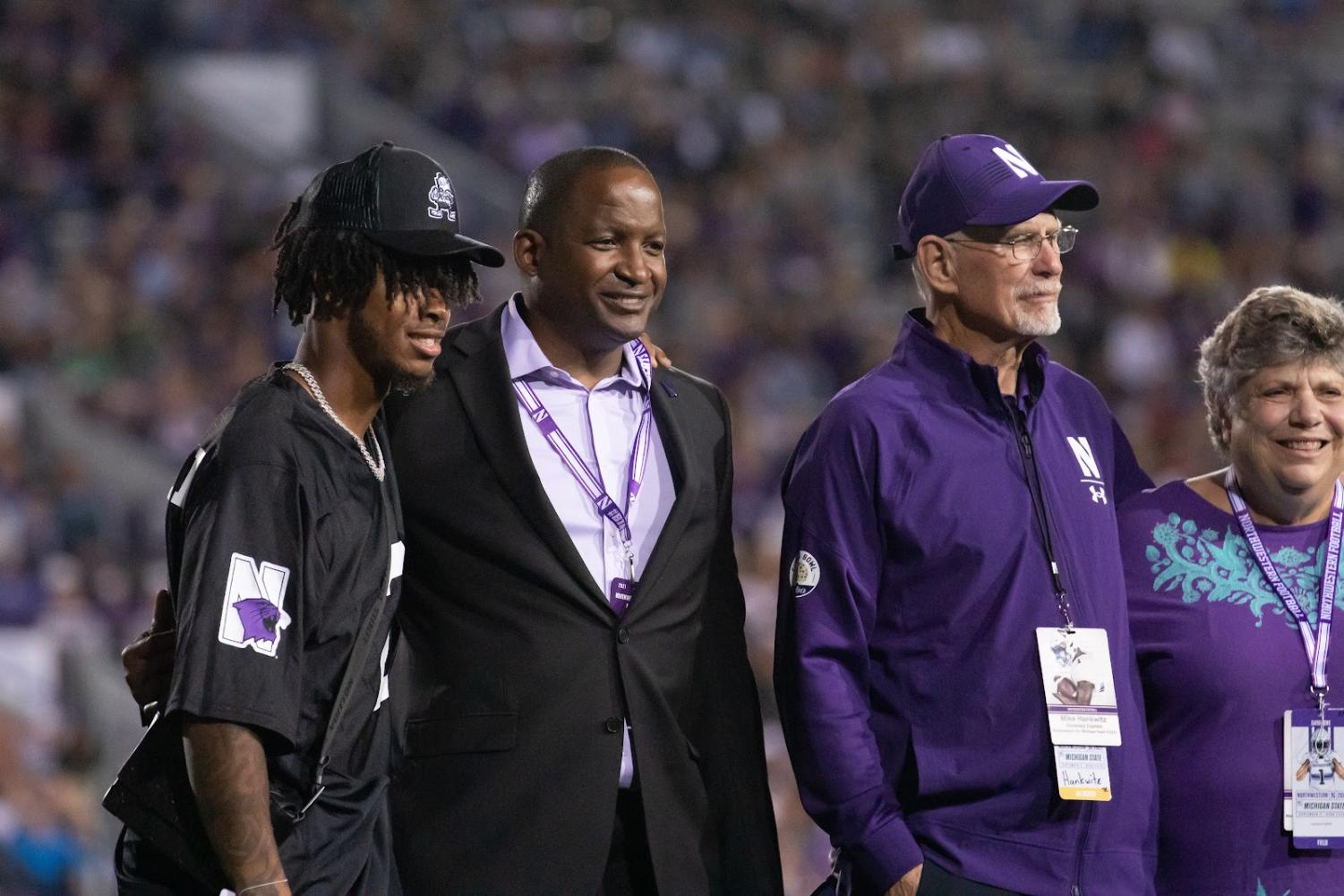 “A pioneer almost everywhere I’ve gone”: Why Derrick Gragg is uniquely positioned to guide the future of Northwestern athletics

Derrick Gragg hasn’t had much time to rest in the last four months.

“I’ve been super busy,” said Gragg, Northwestern’s newest athletic director. “But I call it busy in a very positive way.”

Since starting the role on July 1, Gragg has settled down in Evanston, filled positions in the athletic department and presided over the Wildcats’ first full fall sports season since 2019. All of this, naturally, happens in the space between NU’s various sports games, which he watches closely from the sidelines and bleachers.

And, of course, there’s the $480 million donation from Pat and Shirley Ryan that his department welcomed last month, the bulk of which will go toward the renovation of the 95-year-old Ryan Field.

“It’s amazing: the resources, the loyalty, the program, the institution, the excitement around this,” Gragg said. “It’s a lot going on, but I feel very good and positive about the direction.”

In his first role as the athletic director of a Power Five program, Gragg is ready and working to prove he’s the right man for this job, months after the University chose the wrong one.

“I could have gone either way”

Before his hiring as the Cats’ athletic director, Gragg served as the senior vice president of inclusion, education and community engagement at the NCAA offices. But he is quick to point out that his diversity and inclusion work long predates his NCAA tenure.

“I was raised by a mother who helped integrate a high school back in 1965 as one of the first Black students there,” Gragg said. “So that’s just part of who I am. I’ve been a pioneer almost everywhere I’ve gone, including coming to Northwestern.”

After a decorated four-year career as a wide receiver at Lee High School in Huntsville, Alabama, Gragg committed to play SEC football at Vanderbilt. He entered as part of a historic class — the 12 Black athletes in that year’s class of football recruits was a record for the Tennessee university. According to Gragg’s book “40 Days of Direction,” the number was more than those of the past three classes of football recruits combined.

The transition to the elite private school wasn’t a smooth one. Gragg’s GPA in his first semester as a student-athlete was just 1.06. After that wake-up call, he said everything changed.

“That was one of the first true turning points of my life, and I could have gone either way,” Gragg wrote in “40 Days of Direction.” “The last thing I wanted to do was return home as a failure after less than a year. More than that, I did not want to disappoint my mother, who always sacrificed to provide opportunities for my brother and me.”

Gragg’s rededication paid dividends both on and off the field. In a 1990 game against Alabama, Gragg hauled in three touchdowns, but his finest highlight came during his senior year, when he was named to the SEC All-Academic Team. Decades later, Gragg says the experience of playing at an elite academic school in a major football conference is especially relevant to his new role.

“Regardless of what the school is, student athletes really relate to me well,” Gragg said. “I’ve been through what they’re going through, especially at a high academic institution like this, so I understand the experience.”

After his Vanderbilt career, Gragg stayed in the collegiate sports stratosphere, working his way up in the ranks. In 2006, he was named the athletic director at Division I program Eastern Michigan, becoming the youngest Black AD in the nation at age 39.

Jim Streeter served as the associate AD for communications under Gragg, and he remembers immediately taking to Gragg’s engaging leadership style, which empowered his staff to make their own decisions.

“He would point you in the right direction and say, here’s my goal, here’s my total picture of what we’re doing now — go ahead and try to implement that plan,” Streeter said. “He gave us a lot of leeway in determining what to do and when to do it, how to do it.”

Gragg led Eastern Michigan’s athletic department until 2013, when he took the job at another Division I school, Tulsa. Within his first three years, the Golden Hurricane reached the NCAA men’s basketball tournament twice. He finished his tenure with Tulsa having won the second-most titles across all sports in the big-time American Athletic Conference.

One of his major accomplishments was helping Tulsa transition from Conference USA to the AAC. The Golden Hurricane’s position as the smallest school by enrollment in the AAC — a similar position to NU’s own standing in the Big Ten — was a reason for excitement instead of an excuse. Tulsa thrived against schools with more resources and enrollments.

“He definitely solidified our department and our university within the conference,” Tulsa executive senior associate athletic director Crista Troester said. “I don’t know how many conference championships we’ve won in (the) American, but we’ve held our own. That’s just a reflection upon the leadership that he provided us as far as doing things on the field.”

Gragg left his role at Tulsa for the NCAA offices in 2020, taking a newly created position as the senior vice president of diversity, education and community engagement. Though his work at the NCAA lasted less than a year, he built on his earlier efforts with leadership development programs and contributed to the offices’ efforts in programming and engagement.

In an email to The Daily, DeeDee Merritt, acting director of NCAA leadership development, praised Gragg’s “insight, assertiveness and enthusiasm” and highlighted his past experiences as an athletic director as a valuable resource for the office.

And Gragg eventually decided to return to the athletic director role, albeit this time on one of the highest stages in collegiate athletics.

A Department in Disarray

On June 4, NU announced Gragg as its 23rd athletic director in school history and the first person of color to serve in the position.

The achievement was historic, but the context — and athletic department Gragg inherited — was rife with mistrust and commanded national headlines for the wrong reasons.

In the final weeks of longtime athletic director Jim Phillips’ tenure before his departure for the ACC commissioner role, former cheerleaders Hayden Richardson and Alyssa Johnson brought forward experiences of racism, sexual harassment and abuse within the cheerleading program. Richardson’s lawsuit detailed sexual harrassment by alumni and neglect from the athletic department, while Johnson’s feature shed a light on the program’s racial discrimination.

Then, after a lengthy search process for the next athletic director that included a diverse array of candidates, NU announced Mike Polisky, the deputy athletic director for external affairs and the longtime football administrator, as its pick. Not only was Polisky considered a safe, in-house option, but he was also one of the defendants listed on Richardson’s lawsuit.

In response, more than 200 students and community members protested the decision, expressing both support for the cheerleaders and frustration with Polisky’s selection. Polisky resigned nine days later on May 12, saying the challenges “will not allow (him) to effectively lead.”

Later that month, University President Morton Schapiro revisited the decision in an interview with the Daily.

“Given how it turned out I wish we had tried something else, to be honest with you,” Schapiro said. “As he wrote in the note, it turned out to divide the community, to such an extent that he moved down.”

History Prof. Kate Masur, one of six women faculty members who signed an open letter to Provost Kathleen Hagerty in May, said Gragg’s eventual hiring has not changed her perspective on Polisky’s initial selection.

“I feel the exact same about the Polisky hire now as I did then,” Masur said. “It was a really big mistake, and it remains hard for me to understand how Northwestern stumbled into making such a big mistake.”

This is the department — and the University — Gragg inherited. And though he didn’t discuss the Polisky saga in his opening press conference in June, he has taken steps in his first months to understand perspectives of groups across campus and chart a new path forward.

“We want to make sure that we’re in tune with our student body,” Gragg said. “We’re looking for feedback, more suggestions on how to further engage the student body and create more synergy.”

There’s another addition that has helped fill Gragg’s packed schedule: meetings with different stakeholders from around the university, from athletes and coaches to students and faculty. Through these meetings, Gragg and other officials within the athletic department have made it a point to listen and to understand.

Masur was one of the faculty members who attended a meeting with Gragg and the athletic department. After the dysfunction around Polisky’s hiring, she especially appreciated that Gragg reached out and showed willingness to listen.

Gragg’s qualifications uniquely position him to make meaningful change as a Power Five athletic director and to lead a university as central to the diversity and inclusion conversation as NU. His coworkers from past stops vouch for his ethics and commitment to diversity and inclusion, and Big Ten Commissioner Kevin Warren was among those to publicly celebrate Gragg’s hiring. And the issue he stated as his first project, the renovation of Ryan Field, is already underway.

Still, it’s Gragg’s first steps as athletic director that have meant the most to community members.

“He has a blank slate, as far as Northwestern is concerned,” Masur said. “Northwestern is not a blank slate. Northwestern has all this history. All this damage that was done in the revelations about the abuses of the cheerleaders, and then the hiring of Polisky and the lack of transparency around all of that.”

“He can’t make any of that go away, but what he can do is come in and really try to assess the situation, listen to people and make people feel heard.”