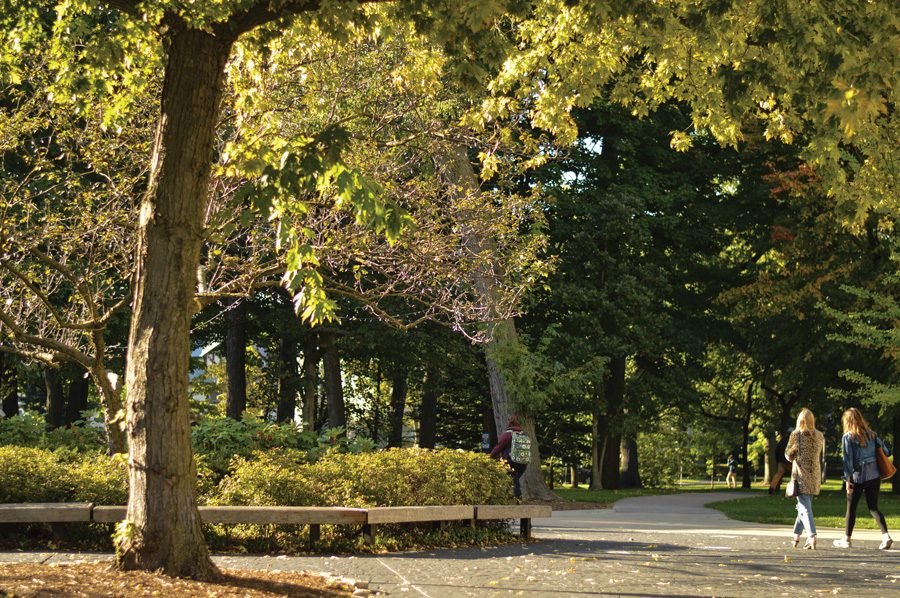 Northwestern’s Evanston campus. Evanston has implemented several sustainability plans, with the latest in effect since 2018.

“Time’s running out”: How Evanston has made a name for itself through its efforts to fight the climate crisis

It’s not easy being green — but over the past decade and a half, Evanston has done just that, making a name for itself as a sustainable city.

From being the first city in Illinois to commit to full carbon neutrality to utilizing community participation every step of the way, the city has implemented a wide range of plans to address the climate crisis. The fight against climate change is ongoing, but to understand the city’s future, it’s important to look back at its past.

In 2005, community organizers focused their efforts toward getting the city to commit to taking meaningful action on climate change. They were successful in getting then-Mayor Lorraine Morton to sign The U.S. Mayors’ Climate Protection Agreement, which committed the city to achieving the Kyoto Protocol’s greenhouse gas emission reduction goals.

According to former Chief Sustainability and Resilience Officer Kumar Jensen, community members were intimately involved in the process for every iteration of Evanston climate action.

“I don’t want to underestimate the amount of time and effort community members have put into the work here,” Jensen said. “They’ve done a tremendous job of really trying to educate themselves and understand how they can be most effective.”

Starting in 2007, residents worked with the city to write the Evanston Climate Action Plan, the first plan of its kind in the city’s history. Approved in 2008, ECAP set a goal to reduce the city’s greenhouse gas emissions by 13 percent by 2012.

The city hired a sustainability coordinator to implement the plan, which consisted of 40 broader goals and about 200 action items. Jensen said the framework was on par for climate action at the time.

“It was a list of all the different types of things the community could do to reduce its greenhouse gas emissions without much prioritization or focus, which was sort of the state of climate planning back in 2008,” Jensen said.

One of the plan’s main accomplishments was setting the groundwork for a community electricity aggregation program, Jensen said. Established in 2012, the program grouped together residential electric accounts, which allowed the city to find cheaper, more sustainable electricity options. Since 2014, participants have had 100 percent renewable energy.

As the 13 percent reduction goal was met by 2013, it was time for a new plan. In 2013 and 2014, stakeholders both old and new in Evanston’s environmental community came together to create a shorter, more focused plan. Established in 2014, the Livability Plan called for a 20 percent reduction in emissions by 2016, a goal the city reached.

Against the backdrop of a new federal administration actively working against efforts of those fighting climate change in 2017, newly appointed Mayor Steve Hagerty decided the city needed a new plan to tackle climate change. In September, the city launched the Climate Action and Resilience Plan Working Group, whose plan was approved in December 2018.

According to Jensen, the plan established Evanston as the first community in Illinois to “set a pathway” towards zero waste and carbon neutrality by 2050, and also to commit to 100 percent renewable energy by 2030.

“In their early days with the Climate Action Plan version 1.0, there really wasn’t much discussion about (environmental racism and equity),” Blair said. “If you looked at who showed up at the meetings, there were the more affluent Caucasian groups. There wasn’t much minority representation.”

CARP’s emissions goals, on the other hand, were paired with an elevated focus on ensuring the plan benefitted every Evanston resident. The plan elevated racial equity, affordability, and climate resilience.

On the issue of affordability, for example, Jensen said they gave low-income communities access to solar energy to alleviate energy burden, or the amount of income a household spends on energy costs.

CARP wasn’t flawless in its execution, either, according to Ald. Eleanor Revelle (7th), founder of Citizens’ Greener Evanston. She pointed to a lack of resources as to why the city wasn’t accomplishing every goal at once.

“​​It’s not a lack of will, there’s just so much competition for resources,” Revelle said.

One of the challenges the city faced was figuring out how to serve all types of vulnerable populations, as some actions could help one population while hurting another, Jensen said. One policy could benefit low income residents, for example, but create new challenges for the elderly or those who are not fluent in English.

CARP will attempt to solve issues that not only diminish carbon emissions, but also directly help Evanston residents, Jensen said.

One of those issues involves the Advanced Disposal Transfer Station on Church St. between the 2nd and 5th wards, whose residents have reported odor, noise and litter, and raised concerns about its potential negative health impacts on nearby residents. City officials have reached out to the EPA to remedy this situation and have completed air quality studies to determine possible health risks to residents.

“When you have a really dense community like this, you oftentimes have really aggressive uses that have been allowed for a long period of time, next to what has now become residential, and so those uses are not necessarily that compatible,” Jensen said.

As for what the future holds for sustainability in Evanston, Jensen leaves the specifics to his successor. He hopes the new electricity aggregation program, which will bring in $500,000 in revenue, will bolster sustainability projects the city’s thin resources haven’t been able to support.

With the help of Alds. ​​Jonathan Nieuwsma (4th) and Melissa Wynne (3rd), Revelle said she hopes to further climate action in her current position as well.

“Time’s running out,” Revelle said. “I do think the city needs to — through its budget, through its policies, et cetera — show that it truly is committed to doing everything we can to address the climate crisis.”