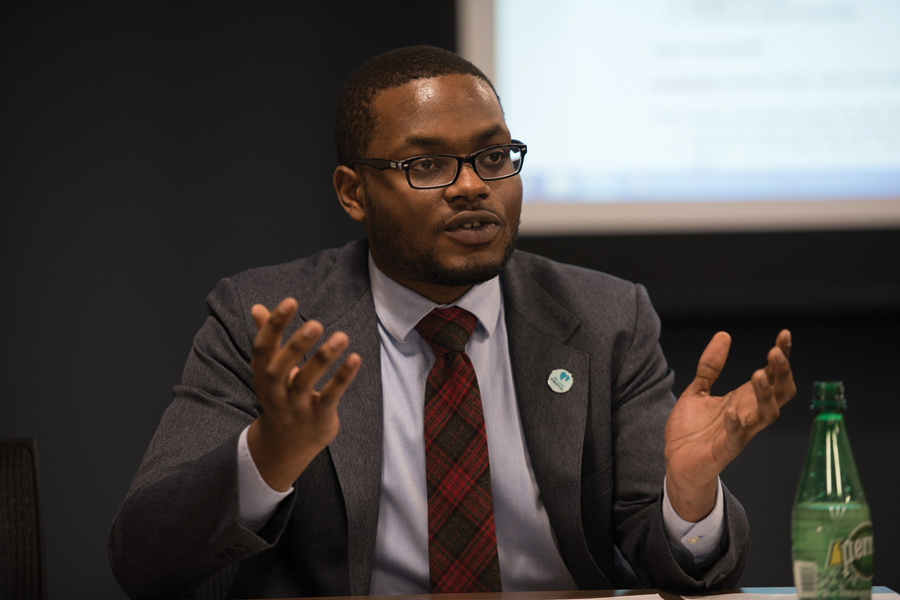 Ald. Devon Reid (8th). As city clerk, Reid created a policy of publishing police misconduct and use of force records online, which he said the Evanston Police Department and city manager’s office are refusing to follow. The city manager’s office said Reid did not have the authority to issue such a policy. (Daily file photo by Katie Pach)

Ald. Devon Reid (8th). As city clerk, Reid created a policy of publishing police misconduct and use of force records online, which he said the Evanston Police Department and city manager’s office are refusing to follow. The city manager’s office said Reid did not have the authority to issue such a policy.

Last July, former City Clerk Devon Reid implemented a police transparency policy. Almost a year later, the city has yet to follow it.

Last July, Devon Reid, Evanston’s city clerk at the time, announced a policy he claimed would increase police transparency: publishing Evanston Police Department misconduct and use of force records on the city website.

In an interview with The Daily, Reid said the policy is important for holding the police accountable and also improving future police behavior. But it has been almost a year since the policy was announced, and no such records have been released. Instead, the policy has been the subject of a dispute over ownership of records between the city clerk’s office and EPD.

Reid, who was elected Eighth Ward alderperson in April, said the lack of record publication is because EPD and the city manager’s office are refusing to comply with the rule by not providing records for the city’s website. At the time, Reid did not pursue the policy further because that would require filing a lawsuit, and he said he wanted to focus on his aldermanic campaign.

Now an elected member of City Council, Reid said he plans to ask the city manager and police chief why they aren’t following the rule in a City Council or Reimagining Public Safety Committee hearing.

“We know that body camera footage and misconduct reports can be critical in exposing wrongdoing and helping root out misbehavior in our police department,” Reid said.

Thus, Reid said the policy’s implementation is essential for increased police accountability. Newly elected City Clerk Stephanie Mendoza said she supports the policy and plans to speak with the police chief and city attorney about why it is not being followed.

Reid announced the policy in a July 24 memo, which said it applies to all records related to formal police misconduct complaints, including accompanying police reports, bodycam footage and other relevant documents. The policy also requires the release of records related to use of force incidents in which a firearm, taser, stun gun or chemical agent is used.

Under the policy, complainants’ names would be redacted, but the names of all officers present at the incident of alleged misconduct or use of force would be made public.

The rule requires the city to release the records within 15 business days of the complaint being filed or the use of force occurring. It also requires the release of misconduct complaints filed since 2016 and records of use of force incidents that have occured since the beginning of 2020.

“Only through transparency and a proactive releasing of Complaint Registers and Use of Force by weapon reports may we work to increase trust in the system and best hold our police department accountable,” Reid said in the memo.

Currently, police misconduct and use of force records can become publicly available through the Freedom of Information Act, but this requires someone to file a request for them. Reid said it is more helpful to the public for them to be automatically released, as people may not even know these records exist. This policy also ensures police records aren’t “able to be buried and hidden and obstructed through complicated processes,” which can occur with FOIAs, he said.

Reid said the policy is also important because knowing misconduct and use of force records will be automatically released could encourage officers to be more careful about their actions, making them less likely to commit misconduct or use force unnecessarily.

At a July 27 City Council meeting, Reid debated the rule with then-Mayor Steve Hagerty and then-City Attorney Kelley Gandurski, who argued Reid had exceeded his authority in issuing the policy, though Hagerty and Gandurski both said they had not had time to fully review it.

In defense of his issuance of the policy, Reid cited a portion of the Evanston City Code stating  the city clerk is “the custodian and keeper of all the books, records, ordinances and papers of the City.” However, Gandurski said this does not give the clerk the authority to tell other city departments how to operate.

Reid said the rule doesn’t relate to FOIA, but Gandurski said FOIA is the proper avenue for releasing city records to the public.

Later on, Reid criticized Hagerty for trying to block the policy, bringing up the issue of race and policing.

“Let’s be clear about what you’re doing right now,” Reid said. “You’re impinging on the authority of a Black elected official around police misconduct and use of force records.”

Also present at the meeting was attorney Matt Topic, who spoke during public comment. Topic heads Loevy & Loevy’s Freedom of Information Act practice and represented the journalist who successfully sued for the release of footage showing the killing of Laquan McDonald by a Chicago police officer.

“Clerk Reid has developed a policy that will ensure that records about police misconduct and use of force are promptly released to the public,” Topic said. “The law is very clear that these are public records subject only to limited exemptions.”

Topic said under the City Code, it is clear the city clerk has the authority to issue such a policy.

Deignan, the city spokesperson, said in an email to The Daily that the city clerk does not have the authority to issue policies directing other city departments. Under the City Code, he said, the police chief is responsible for all police records.

The City Code says the police chief  “shall keep detailed records showing the work of the Department of Police” and that the city clerk shall keep “all papers belonging to the City, the custody and control of which are not given to other officers.”

The police department also has its own FOIA officer. The city clerk used to fulfill all FOIA requests for the city, but in 2019 City Council voted that the police, law and collector’s departments should separately handle requests for their departments.

At the July 27 City Council meeting, Topic said it should not be up to the police whether records are released.

“Unfortunately, I’ve seen too often how placing these decisions in the hands of a police department results in improper denials and costly litigation to your taxpayers,” Topic said.

“I do have this authority,” Reid said. “And I will be standing up to make sure that the authority that I have is upheld.”