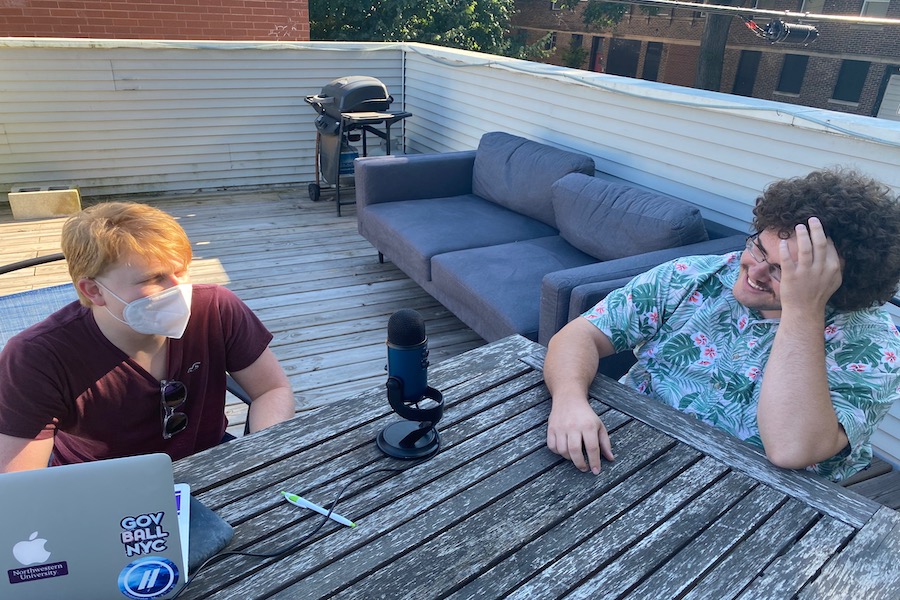 Since starting college, Medill junior Ben Moskow has enjoyed connecting with people, especially musicians. When the pandemic hit, he thought about ways he could recreate this experience in new ways.

In mid-July, he tweeted a quip about how his peers kept asking him when his podcast was coming out. Little did he know that this moment would actually be the genesis of his podcast. People left comments on his tweet that motivated him to make the podcast a reality.

”The opportunity to connect with artists wasn’t there anymore so I thought ‘what can I do to fill this gap?” Moskow said.

Since last summer, Moskow has been releasing episodes of his podcast, Real Ones, as a part of Project Filo, a media collective agency, where he interviews musicians and content creators about their careers. Before this, Moskow did concert coverage for WNUR which is where he honed in on his love for interviewing musical artists.

His first episode premiered last summer with Chicago rapper Brittney Carter and since then, he has produced nearly 15 episodes. The podcast has followed various formats including in-person recordings, Zoom calls and Instagram Lives.

Moskow also works closely with Project Filo founder Brandon Washington, who created much of the social media push for Moskow to start a podcast. Washington said he helps Moskow find a variety of guests and make sure the episodes are released on a consistent basis.

While Washington helps facilitate some of the conversations, he credits the podcast’s success to Moskow’s talent.

“Ben is able to get genuine responses from artists. He naturally has that social behavior that’s required to have a podcast,” Washington said. “Even though the podcast is centered around artists, Ben makes each episode different.”

Although the narrative of Real Ones focuses on the show’s guest, there are a couple things Moskow does in each episode. The first is sharing a list of five songs he’s listening to that he thinks viewers would enjoy. The second is spotlighting a community organization that he thinks is doing great things and encourages viewers to donate to it. All of this information is compiled into a Linktree for the show’s listeners to see at any point.

Moskow said he has learned a lot while producing this podcast and has welcomed criticism. Although he has received a lot of great feedback, one of the most impactful moments was when a guest told him he needed better marketing for the show.

In response, Moskow decided to dive into developing social media accounts and promotional materials for the podcast.

“I’ll take a one minute clip from an episode that’s interesting and make it something for people to post and share,” Moskow said.

This change happened in mid-March, and Moskow cites it as a turning point in the podcast’s success. Since then he said people have started to reach out to Real Ones through social media channels.

Although most of the podcast planning has been virtual, Moskow has had in-person encounters to recruit guests for the show.

Moskow was at a protest in Chicago when he ran into Vashon Jordan Jr., a Chicago photographer who has catalogued protests through thousands of photos. When Moskow asked Jordan if could be on the show, Jordan agreed as a way to promote a book he was releasing on the protests.

“It’s been a lot of putting myself out there and asking people if they want to be on the show,”  Moskow said. “The worst thing they can do is say no.”

Jordan wasn’t the only one who took advantage of being a guest on Real Ones as a way to spread their brand.

Wisconsin musician Unusual Demont was a guest of the show and his manager Kyle-Fratello Hakim thinks the collaboration created traction for both parties. Hakim came into contact with Moskow through Project Filo and worked with Moskow to set up the feature.

“Ben’s really on top of things and he’s a really good host for the podcast so we were in good hands,” Fratello Hakim said. “The way they interacted provided some really interesting and engaging content. It’s a good product.”

Fratello Hakim said he thinks Demont was able to leave this experience with new fans and that Real Ones also gained some fans from featuring Demont.

On the horizon, Moskow hopes to secure a physical space to record episodes, sell merchandise and collaborate with bigger media organizations for interview opportunities. Moskow has several recorded interviews that he is waiting for the summer to release when he has more time to dedicate to Real Ones.

“These past couple of weeks have been crazy and I just feel like a lot of things are synergizing at once. I know there are people listening to this, but it’s still crazy to know people are listening,” Moskow said.