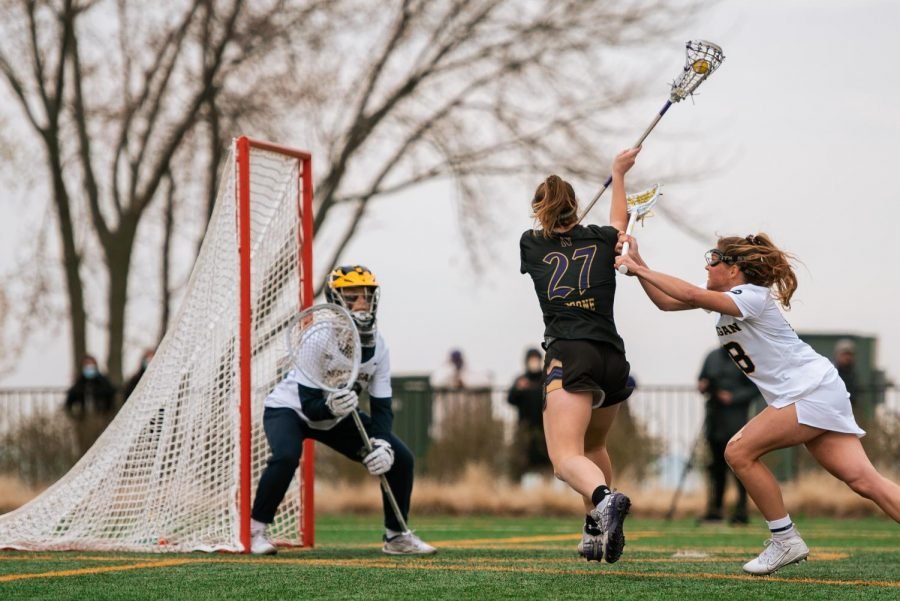 Junior attacker Izzy Scane goes to shoot against Michigan. Scane’s 89 goals on the season are a new Northwestern record.

Lacrosse: How Izzy Scane went from the backyards of Michigan to front and center in the Big Ten

Eight minutes into the 2021 Big Ten Tournament title game, Northwestern stared down its largest deficit of the season. The No. 2 Wildcats trailed then-No. 13 Maryland by four goals and needed a momentum shift.

There to provide it was junior attacker Izzy Scane.

She closed out the first half with three straight goals and finished the period with four. By the end of the game, she had scored nine times, just short of her career-high and program record of ten. More than that, she helped NU secure its second Big Ten Tournament title in program history.

Scane was named the tournament’s Most Valuable Player and Big Ten Attacker of the Year after that game, adding to an extraordinary resume from her 2021 season including five Big Ten Offensive Player of the Week nods and a nomination for the Tewaaraton Award, given annually to the top college lacrosse player.

“She’s as complete a player as the women’s game has ever seen,” Greg Courter, Scane’s high school coach, said. Courter said Scane is as strong a defender as she is an attacker.

Few players in NCAA women’s lacrosse history have recorded a season like Scane has this year. She leads the NCAA with 81 goals, on pace to break the association’s single-season record.

She also leads the country in goals per game, points and points per game.

Scane has already become one of the most dominant players in Northwestern history — and that’s no small feat when playing for a team with seven national titles. She holds the program’s single-game goal record and is just six tallies away from breaking the Cats’ single-season record of 86. And she has no plans of slowing down.

“She’s grown into consistency,” coach Kelly Amonte Hiller said. “Even when she’s not having her best day, she will find ways to impact the team in a positive way. And (she) still finds ways to score goals and make things happen. She’s become a real leader for our program.”

The first time Scane picked up a lacrosse stick was in sixth grade. Previously a competitive gymnast, she said she was drawn to “being able to work together with other people in a fast-paced game.”

There were no local girls’ lacrosse camps when she started playing, so she attended boys camps with her brother James. Soon, her younger brothers Cormac and Griffin picked up the sport, too. The siblings grew up competing against each other, practicing their skills in their backyard.

“That definitely sparked some passion, watching my older brother start playing,” Izzy said. “Then I started playing, and once it became a family affair it was kind of full steam ahead from there.”

However, the Scanes were competitive long before they picked up lacrosse. Izzy’s parents, Patricia and Joe, met as student-athletes at Grand Valley State University and instilled a love of sports and competition in their children from a young age.

“Since our kids were young, we would play wiffle ball in the backyard and (the) kids would set up competitions like mini-Olympics with the neighbors,” Patricia Scane said. “The kids have always done athletics and always loved them.”

She said she couldn’t overstate what sports gave her family, saying they have brought a lot of positivity to their lives.

“She got aggressive,” James Scane said. “She had to be aggressive, playing in the backyard with three brothers, and she just kind of took that into her game in the women’s game.”

From the moment she started playing lacrosse, Izzy Scane dreamed of attending Northwestern.

When the Cats recorded their most recent national championship in 2012, she said they were the “dream team” all young lacrosse players aspired to play for. NU’s academics and proximity to her hometown of Clarkston, Mich. stood out to her alongside the team’s national success.

“At that time, they were just so, so dominant,” Izzy Scane said. “It was impossible to not see them as the dominant program in the country.”

During a sixth grade project on career development, Patricia Scane said her daughter had to research a college and write them a letter. Naturally, Izzy Scane picked Northwestern, not only writing a letter to the institution, but also to Amonte Hiller, saying she would one day play for the Cats.

Izzy Scane’s mom said she was initially skeptical of her daughter’s hopes. Michigan isn’t a state known for producing Division I lacrosse recruits, and Northwestern was the best of the best.

“You don’t tell them, ‘it’ll never happen,’ but you go ‘that’s not likely to happen,’” Patricia Scane said. “It’s like saying you’re going to be a baseball player and play for the Detroit Tigers.”

While lacrosse is spreading nationwide, it remains anchored in hotbeds such as Baltimore, Philadelphia and Long Island. However, some of the sport’s newest leaders — Syracuse’s Megan Carney, Boston College’s Charlotte North and Izzy Scane — are from non-traditional areas like the South and Midwest. Several of NU’s top players, including senior attacker Lauren Gilbert, senior midfielder Brennan Dwyer and graduate student midfielder Lindsey McKone all come from non-hotbeds as well, like Illinois, Texas and Oregon.

Courter said Izzy Scane’s Michigan roots make her talent “that much more impressive.” He said it takes a “rare player” to go on to play Division I lacrosse from southeastern Michigan.

“For someone to come out of this area and not only play for a program as fantastic as Northwestern, but be a leader and the leading scorer for that program, is incredible,” Courter said. “It speaks volumes about what (Scane) has done.”

Izzy Scane said being from Michigan has been a “chip on her shoulder” and pushed her not to settle with being the best in her town, but the best she can possibly be. She was determined to see her plans through.

She joined a local travel program, the Detroit Lacrosse Club, and was soon playing out of her age group. She watched all the lacrosse she could and kept a journal of different plays and game information. She began attending camps and tournaments all over the country and she started playing for Mass Elite, a club program out of Boston, to strengthen her skills.

It was all part of an effort to get to Northwestern, and it worked. By midway through her freshman year of high school, she was a Northwestern commit.

“I was full steam ahead on Northwestern from when I started playing lacrosse, and luckily it panned out once I got older,” Izzy Scane said. “It was exactly what I was looking for and thankfully they wanted me as much as I wanted them.”

Izzy Scane’s journey to Northwestern wasn’t seamless, however. During the summer ahead of her freshman year, she was cut from the U-19 U.S. women’s national team training squad – a team coached by Amonte Hiller.

After getting the news, Izzy Scane said she spoke with Courter to figure out the best way to move forward. Courter said he was “heartbroken” when he heard, especially since several of Izzy Scane’s future teammates at Northwestern made the cut. He made sure to encourage her to stay confident and work hard at practice, telling her that “‘everyone will know you should have been on that team.’”

Izzy Scane said she took his advice, calling it a “turning point” in her game. She practiced often during the rest of the summer and played hard during NU’s fall ball games.

Shortly after, Amonte Hiller put her back on the team. She said the initial decision wasn’t made “in a bubble,” and Izzy Scane was very close to making it. Amonte Hiller said she was “phenomenal right from the get-go” during her freshman fall, encouraging her to reinstate her.

“I told my staff ‘I’m gonna be tracking this and sending film, but this kid can play,’” Amonte Hiller said.

Izzy Scane went on to help the U.S. U-19 team win gold in Ontario, Canada the following summer, tying for most goals on the U.S. squad and receiving All-World honors.

As the Cats look to the 2021 NCAA Division I Women’s Lacrosse Championship, Izzy Scane has one central plan.

“The goal, obviously, is to be the best team in the country,” Izzy Scane said.

Ranked second nationally and undefeated so far, NU looks poised to make a run this year. The Cats have the nation’s top scoring offense and rank first in draw controls per game.

Even as Izzy Scane receives national attention from the Tewaaraton committee, her focus remains on her team. She said being one of the 25 finalists for the Tewaaraton Award has been a “dream come true,” but the main thing on her mind is winning another title for the Cats.

“Awards only mean so much,” Izzy Scane said. “You just want to get to the end of the season and win a national championship with your best friends.”