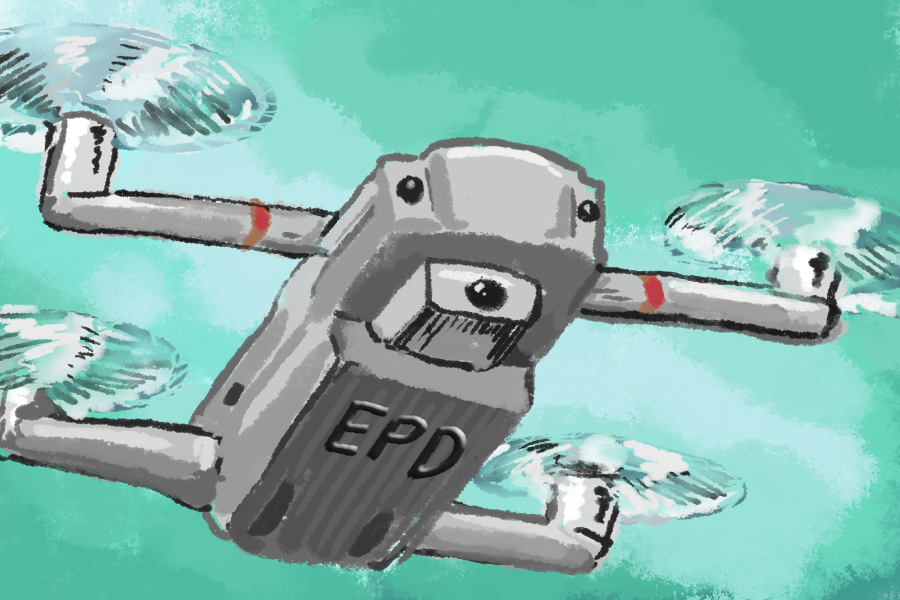 The sole drone in the joint UAS program was bought in May 2020, but it hasn’t yet been used in a field operation. (Illustration by Hank Yang)

The sole drone in the joint UAS program was bought in May 2020, but it hasn’t yet been used in a field operation.

A year after purchase, questions linger around purpose of Evanston’s unused police and fire drone

Evanston Police Department’s aerial fleet is unassuming: a single four-rotor drone, small enough to fit in the palm of your hand.

While small, the drone makes up the entirety of an Unmanned Aerial System program, jointly operated by Evanston’s police and fire departments. A year after purchase, the drone has not yet been employed in the field. As the departments work to get the program airborne, however, questions of legality remain around some of the drone’s intended uses.

The drone’s primary benefit is its ability to perform tasks such as water rescue and live fire analysis faster and more safely than a team of officers, according to police sergeant Scott Sophier. Sophier coordinates the UAS program, in addition to supervising EPD’s Community Policing Unit, a team of officers tasked with fostering trust between police and the community.

EPD purchased the drone, a DJI Mavic 2 Enterprise Dual, from W. S. Darley & Co. in May 2020, along with an iPad and other supplementary equipment. Both EPD and EFD later purchased pilot training services from DroneUp, LLC, a Virginia-based company that services public and private clients nationwide. The two departments spent a combined $7,196 to jumpstart the UAS program.

Austin Spillar, a board member of police accountability organization Citizens Network of Protection, said he doesn’t see a need for counter-terrorism programs in Evanston. He also said he is concerned about counter-terrorism as an objective for law enforcement, given past usages of the label of “terrorist.”

“That terrorism label, I’m certainly very wary of that and how it’s been used to provide the pretext for surveilling police protests and Black and brown communities,” Spillar said. “If we’re worried about security and public safety in Evanston, there’s ways to be very proactive in addressing those without getting law enforcement involved.”

Sophier told The Daily that EPD chose the DHS grant because its parameters matched the department’s needs to obtain the drone and pilot training. The department did not provide a grant application form that would have explained the drone’s intended purpose when requested.

The 2013 Freedom from Drone Surveillance Act strictly limits what Illinois law enforcement agencies can use drones for. The act, spearheaded by then-state senator and current Mayor-elect Daniel Biss, bans all police drone use other than listed exceptions, including missing person searches, crime scene photography and responses to terrorist threats when determined by the DHS.

The legislation also outlaws drone weaponization, and mandates that data captured by police drones must be destroyed within 30 days unless used in an ongoing police action.

While he is proud of the act and its limitations, Biss said he believes Evanston should still hold itself to a high standard when applying the law to its own program.

“We shouldn’t try to be creatively looking for the most expansive possible interpretation of those exemptions,” Biss said. “We should have total clarity about any specific narrow reasons that we would need a drone, and really hold ourselves to only using it for that.”

New exemptions could be added to the act if passed as amendments by the Illinois General Assembly. One such amendment almost passed in 2018, which would have allowed police to use drones for safety and security at large-scale events including protests and public demonstrations.

The amendment later died in committee, but EPD listed crowd management as a potential use of the drone in its proposal.

On January 13, 2020, Police Chief Demitrous Cook and previous Fire Chief Brian Scott presented the program and the UAS grant to the Administration and Public Works Committee. Scott spoke highly of the drone’s potential as a crowd management tool, calling it “essential” for traffic and crowd control.

“Not only would it be helpful in the pre-planning of those sites for an anticipated special event, but I think we could use the UAV to proactively help us discover issues or problems when it comes to traffic flow, pedestrian movement, or overcrowding at any special event,” Scott said.

When asked how the departments would assure residents their privacy would be respected, Cook referenced the Freedom from Drone Surveillance Act as a standard for EPD’s policies.

“We’ll be tailoring our rules and regulations in the police department based upon this law, pretty much as we did with body cameras,” Cook said.

No matter the intended use, the drone has not yet been deployed by either department in a field operation. Training was completed during summer 2020, and EPD currently has three officers certified as drone pilots.

Sophier said the drone’s lack of use is due to personnel challenges within the department, mostly prompted by COVID-19, and efforts are underway to train additional officers as pilots. He also said the department is interested in purchasing another drone so coverage is not interrupted during a battery change.

As mayor, Biss said he will approach the drone program cautiously, drawing from the lessons he learned while legislating police surveillance technology in the Illinois Senate.

““You have to try to put in place the rules and regulations quickly as the technology is developing before a practice takes hold,” Biss said. “Because once it has taken hold, it is enormously difficult to roll back.”