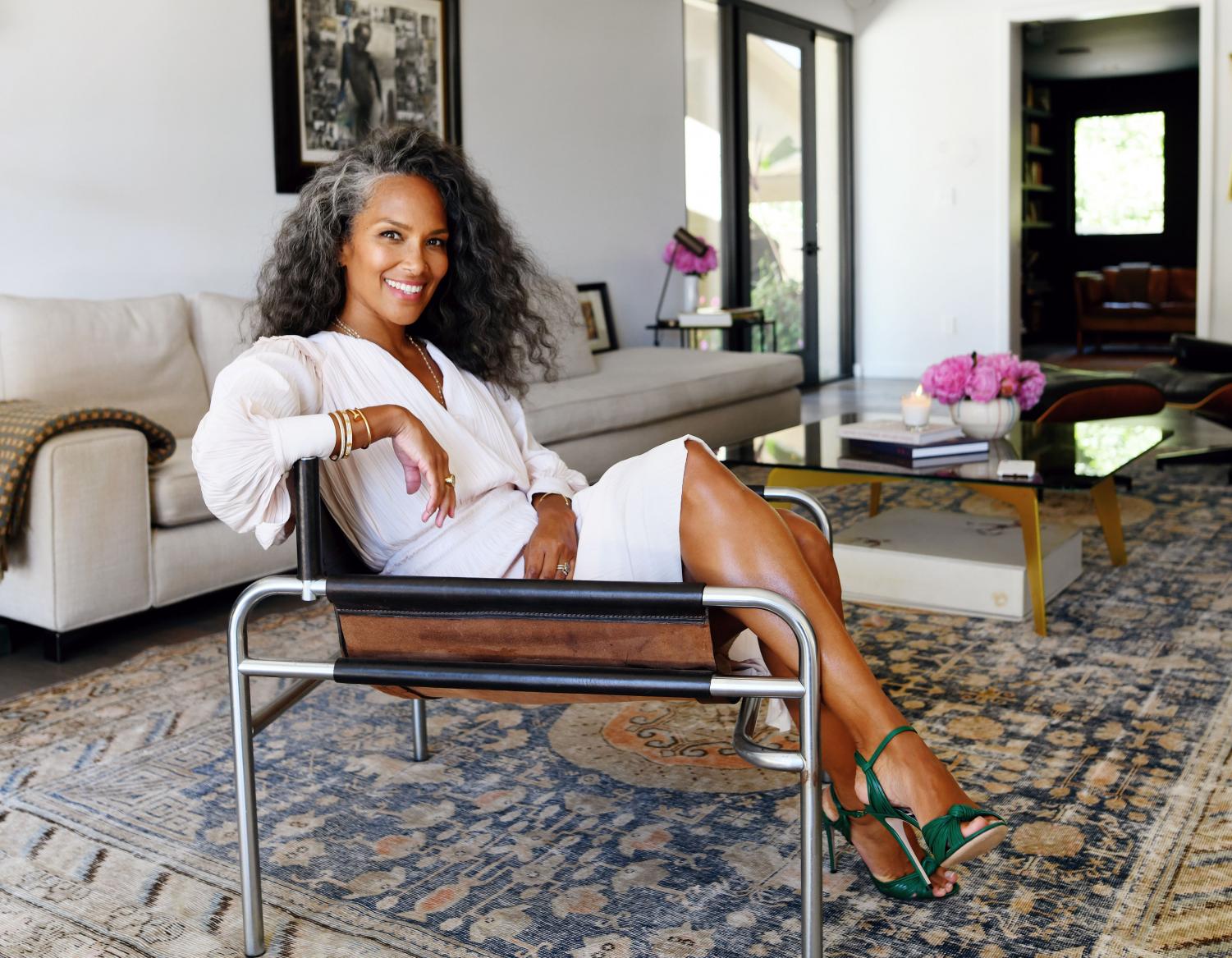 Mara Brock Akil (Medill ’92) still remembers the first time she made an audience laugh. As a freshman at Northwestern, she volunteered to help some friends in the Black sketch comedy group Out Da Box with a show. A member of the group encouraged her to write a sketch, and despite her initial protests that she was a journalist, not an entertainment person, she ended up writing a parody of Mike Tyson and Robin Givens’ then-recent marriage.

“The first laugh was a high I will never forget,” Akil said. “People responding to my work in the places I imagined they would, it was the first hit of, maybe this is something new.”

In the almost 30 years since she graduated from NU, Akil has spent her career making audiences laugh, and occasionally cry, through TV shows that center the experiences of lovable, if deeply flawed, Black women. Her best known show is the beloved 2000 sitcom “Girlfriends,” which follows a close knit friend group as they support each other through relationships, their careers, and lives. But since developing “Girlfriends,” she’s established herself as a powerhouse television producer and writer, creating hit shows such as “Girlfriends” spin-off “The Game,” “Being Mary Jane,” “Love Is_,” as well as producing her husband’s Salim Akil’s superhero drama “Black Lightning.”

And just recently, Akil has entered a new era of her career: In September, two days before “Girlfriends” began streaming in celebration of its 20th anniversary, Netflix announced a multi-year deal with the writer and producer to develop original content. While Akil can’t say much about what work will come out of this deal, she’s excited to share it with the world.

“I feel like I’m wearing my first day of school outfit,” Akil said, laughing. “You’re going to get more and better of me and my voice.”

Akil decided she wanted to work in the TV industry in her senior year at NU, when she met Communication professor Delle Chatman at an Organization of Black Screenwriters seminar. Akil started meeting with Chatman during office hours to discuss her career, and eventually petitioned to get into her screenwriting class. That class was the first time she ever felt a genuine joy for the material, she said. When Chatman passed away in 2006, Akil dedicated an episode of “Girlfriends” to her.

Former Communication professor Njoki McElroy taught Akil in two classes focused on directing and performing Black literature. McElroy described Akil as one of the best students she ever had, with natural talent for developing characters and connecting to fellow performers and crew members.

Like her time at NU, Akil said the beginnings of her TV career were defined by the help of mentors who helped open doors for her. Her first major job out of college was as a PA on “The Sinbad Show,” executive produced by Ralph Farquhar. Farquhar became her mentor, and eventually gave Akilher first writing jobs for the short-lived Fox show “South Central” and the hit sitcom “Moesha,” starring Brandy. Working on these shows aimed at Black audiences by Black creators was hugely important to Akil at the time, as it helped her build confidence and the skill set to achieve her career goals.

During her time writing “Moesha,” Akil met her future husband Salim Akil; the beginning of their relationship would be part of the basis for their OWN show “Love Is_,” which follows the careers of a Black couple in the 90s. Despite only lasting for one season, the show is one of Akil’s favorite works; she describes it as the type of show she wanted to make when she first came to Hollywood out of college.

Although the show was partly inspired by her own life, Akil said what she enjoyed most about “Love Is_” was how it explored how to balance the responsibilities and obligations that come with different aspects and types of love, including romantic love, but also love for your career, love for your friends and family and love for yourself. Akil also used it to examine the realities of being a Black storyteller in Hollywood and have your love of your art be undervalued.

“To get that level of expression out at this point in my career as a storyteller is exciting, because I was able to exercise something that’s been bubbling up within me through many episodes of television,” Akil said.

Steven Calitri, who served as the director of cinematography for “Love Is_,” described meeting Akil as both intimidating and relaxing, due to her larger-than-life but very warm presence. Calitri said Akil built a positive and healthy atmosphere on set, and approached collaboration with a focus on experimentation and creativity.

“That environment changed me to approach life in a better way,” Calitri said. “I was like, ‘Why not take up more of your energy with positivity?’”

Before “Love Is_,” Akil explored relationships and friendships in her most famous show, “Girlfriends.” Originally, she said the show was pitched to UPN as a response of sorts to the then-airing “Sex and the City.” Akil wanted to create a show that explored sexuality and dating life like “Sex and the City,” but for young Black women, and with a focus on struggling to have it all rather than just trying to get a man.

When the show premiered on Netflix, Calitri watched it for the first time since it originally aired. After getting to know Akil personally, Calitri said her creative vision was clear in the writing and the characters.

“I hear her in all these characters and what they’re talking about,” Calitri said. “She found a way to utilize herself, which is a person who owns the room, and break that down somehow. When I’m watching ‘Girlfriends,’ I’m hearing Mara joke around with a bunch of friends.”

At her pitch meeting, Akil described the tone of the show by drawing from an experience during her time as a writer on “Moesha,” when she pitched an episode where Moesha and her friend Kim got into a fight and called each other bitches. Farquhar rejected the pitch, telling her to “save it for her pilot.”

“I remember at this pitch meeting they asked me, ‘What’s unique about this friendship, about this Black women friendship?’” Akil said. “And I pulled out this bitch story, and I was like, ‘These four women, they might be able to call each other a bitch, but if anyone else calls them a bitch, it’s a fight.”

During the eight-year run of “Girlfriends,” Akil explored different types of friendships between Black women, from the relationship between coworkers Joan (Tracee Ellis Ross) and Maya (Golden Brooks) to the lifelong but often strained friendship between Joan and Toni (Jill Marie Jones). The show was also unafraid to dive into serious issues that Black women faced, such as colorism and the HIV/AIDS epidemic.

“Girlfriends” aired for eight seasons, only to be cancelled in 2008 without ever receiving a proper series finale. But it remained a beloved touchstone for many Black women, and experienced a resurgence in popularity following its addition to Netflix last September.

McElroy said what makes Akil a strong writer is her talent at delving beyond the surface of her characters and developing them in a way that feels human and true to life. This is particularly rare, she said, for stories about Black people, who often aren’t viewed as human beings by the larger racist society.

“She realizes that stories should be meaningful and valuable,” McElroy said. “She gives them that real humanity that’s lacking in a lot of Black situations. Because she knows that one of the most difficult things in being Black is that our humanity doesn’t have the value it should have.”

Akil said when she entered the business, she felt there was a pressure on creators to counteract historical negative Black images and create overly positive and unrealistic depictions of Black characters. But to her, this focus on positive depictions failed to create Black characters that were true-to-life, and that Black audiences could see themselves in. The women on “Girlfriends” were very flawed people, and that’s part of why they’ve endured.

“There is no human being on this earth who is perfect, and that’s what they were asking Black images to be,” Akil said. “Our humanity is between the two extremes of positive and negative. And I think people can respond and see their own humanity reflected back at them in my shows, and I think that’s why they return.”

— Nicole Sullivan gives her voice to Supergirl, Shego and other animated characters