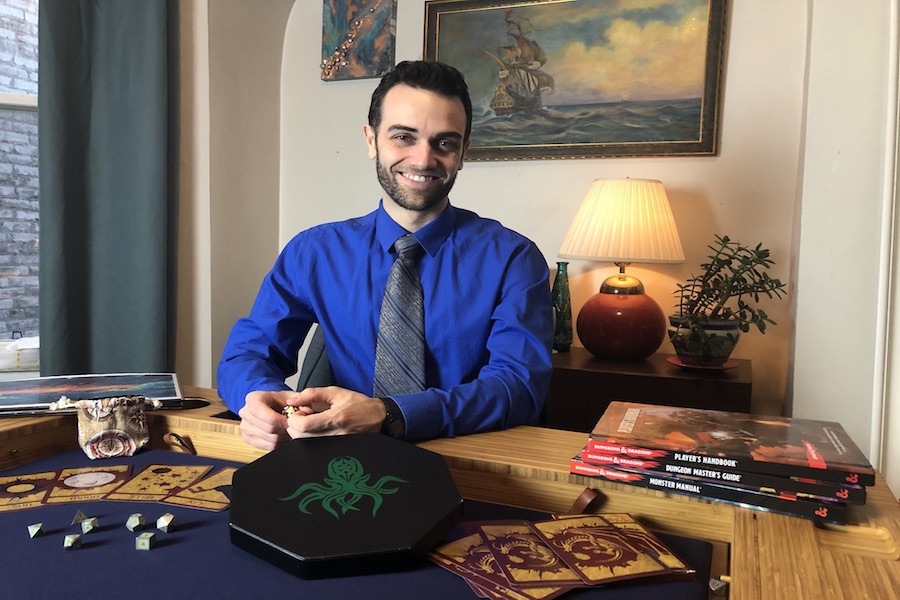 Alejandro Tey. The Nu Alum is bringing Dungeons & Dragons to Discord with his company Tabletale Games.

Stoic dwarves, magical elves, trickster halflings: All are characters you can play as in Dungeons & Dragons, a tabletop role-playing game featuring multi-sided dice and game sessions drawn out over several months. And although it was created in the ’70s to be played in-person around a table, Northwestern alum Alejandro Tey (Communication ’13) is bringing the iconic game into 2020 with a virtual twist.

Tey, a theater artist whose work focuses on audience interaction and engagement, found himself out of work when the pandemic began. He had been playing D&D as well as other role-playing games (RPGs) for a while, and fell in love with the collective storytelling aspect that differentiates RPGs from regular board games. In the spring, he ran a few virtual one-shots, or single-session adventures, for friends.

“I just threw it out there,” Tey said. “I was like, I’m gonna run some one-shots this week, if y’all want to toss a coin to your Witcher please, by all means, this gentle theater kid will appreciate it. And that kind of took off.”

As the pandemic dragged on, a friend of Tey’s proposed making the virtual games more formal and hiring theatrical people, like Tey, as Gamemasters who organize and moderate the sessions. In April, Tabletale Games was launched.

Tabletale offers Gamemaster services to a wide range of D&D players. From Learn to Play sessions to public games that anyone can join through Tabletale’s Discord server to private campaigns written for specific groups, the company has expanded its services quickly since launching.

Its second Gamemaster, after Tey, was Sean Foer (Communication ’15). Tey and Foer met at Northwestern doing “Wrestlepocalypse” — an annual staged wrestling show — but also worked together after college on Tey’s RPG performance project “Isle of Sugar,” which is based on his grandparent’s experiences during the Cuban revolution. Foer said the theatricality and performance inherent in running a game drew him to RPGs.

“One of the roles of the dungeonmaster in D&D is to make the world come alive,” Foer explained. “And one of the ways you do that is by taking on the roles of the characters in the world — the villains, the helpful NPCs (non-player character), the magical old crones in the woods who have a boon to grant… Ultimately, it’s all storytelling.”

The online format allows players from different backgrounds and even in different countries to create a story together. The Gamemasters use tools like Discord and virtual tabletop websites Roll20 and Shard, to bring the table to players digitally.

For Tey, a great Gamemaster isn’t enough — campaigns need thoughtful, creative players too. Tabletale has hosted a wide range of players, and they are working on building a community of D&D lovers.

Tabletale’s community has grown exceptionally quickly. More than 100 players have participated in their Learn to Plays. Additionally, they have run more than 250 game sessions, which averages to more than one per day since they started, according to co-founder Zach Berinstein.

Tey said that while playing RPGs virtually was something he was doing before COVID-19, the escapism of D&D lends itself to the isolation and frustration people around the world are experiencing right now.

“You decide what role you’re gonna play, you get to choose who you’re going to be. And that’s huge,” Tey said.

In addition to playing D&D, Tey works with Sojourn Theatre, a company that focuses on civically-engaged performances. Tey is a member of their ensemble and worked closely on a show called “How to End Poverty in 90 Minutes (with 199 people you may or may not know)” which is a participatory theatre event that was conceived at Northwestern when Tey was a student.

Michael Rohd (Communication ’89), a former Northwestern professor and founding artistic director of Sojourn Theatre, directed the devised process in 2013 at Northwestern and has since worked with Tey to bring it around the country. Rohd said he sees a lot of connections between participatory theatre and RPGs, particularly their potential for bringing about social change.

“Alejandro’s work, just in the RPG world, is an example of an artist being creative and imaginative in an entrepreneurial way, but also a great example of a particular technique that invites people to play together,” said Rohd.

And if you’re looking to get into D&D but feel daunted by the rules and dice and fantastical creatures, Tey assures newcomers it’s not as complicated as some make it out to be. The Gamemaster sets up the world, Tey explained, but it’s up to the players to resolve how things work.

“In a lot of ways, it is simply a variation of the oldest game, which is: let’s play pretend,” Tey said.

Related Stories:
— Behind the scenes of ‘How to End Poverty in 90 Minutes’
— Lookingglass Theatre Company builds community and inventive art through its unique ensemble-based approach