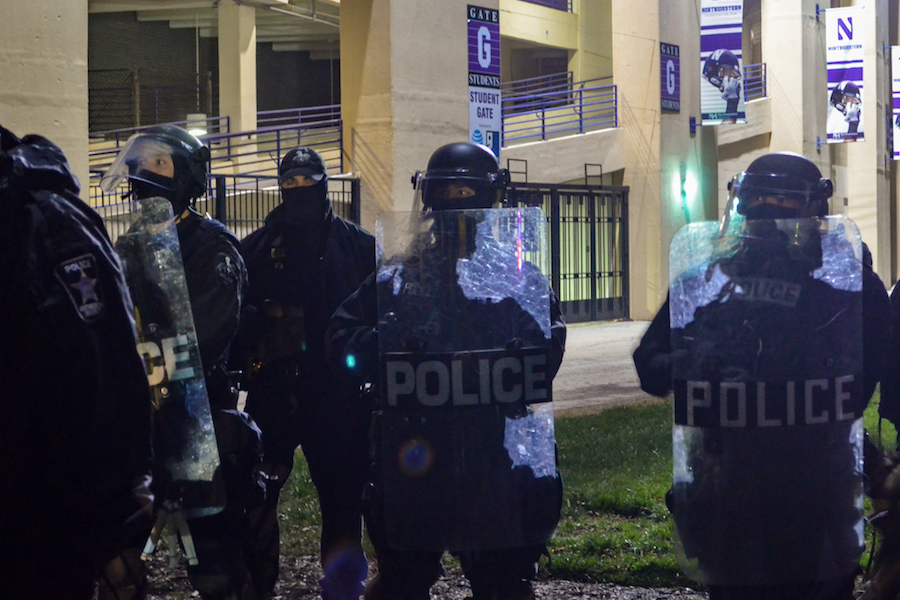 Police officers in riot gear form a barricade on the east side of Ryan Field during the Maryland vs. Northwestern game Saturday. (Molly Lubbers/Daily Senior Staffer)

Police officers in riot gear form a barricade on the east side of Ryan Field during the Maryland vs. Northwestern game Saturday.

Students led by Northwestern Community Not Cops demonstrated at the perimeter of Ryan Field during the Maryland vs. Northwestern game Saturday, marking 13 straight days of protests demanding the abolition of University Police.

The group was met with an escalated police presence from the Evanston Police Department, UP and Illinois crowd control — officers from the Northern Illinois Police Alarm System’s Mobile Field Force. As protesters moved around the exterior of Ryan Field, police on bicycles and on foot rushed to form barriers between the crowd and the stadium, sometimes becoming forceful and threatening arrest.

“I was disgusted by it, it was frightening,” one graduate student said. “But all in all, I just feel happy to be out here fighting for something that I know is a just cause. And (the police) are proving it with their behavior tonight.”

That graduate student, who asked to remain anonymous for safety reasons, told The Daily that as protesters tried to form a protective bike barrier at one gate, one officer picked up a bike and tried to throw it into the crowd, and it swung toward the student’s face. At the same time, the student said another officer in front of them shoved his handlebars into their stomach.

About two hours into the action, protesters gathered in an open space to the east of the stadium, and police formed a barricade in front of them. Around 8:10 p.m., a group of officers in riot gear joined the other officers with at least one dog from a K-9 unit.

At that point of the night, protesters were making no attempt to enter a stadium gate, although they had periodically moved to different section entrances earlier. Multiple students told The Daily that officers pushed a clump of protesters, with some threatening them with arrest.

One sophomore said that as a first-generation, low-income student, the arrest threats were nerve-wracking. The student, who asked to be anonymous for safety reasons, added that it made them angry they were threatened with arrest for “just standing,” but appreciated the community of the protesters.

“I didn’t know one of the people next to me, but we held hands really tight, and that was a moment that I will share with that person,” they said. “Just that solidarity of knowing that something bad could happen to both of us, but we’re both here for each other.”

The Daily verified photos from another protester of broken skin and bruising on their lower calf, which they believed were caused by a police officer’s bike hitting their leg during this confrontation.

The Daily reached out to UP and EPD, but they were not immediately available for comment.

The action started at the Central Street CTA station with a moment of silence for Marcellus Stinnette and Marc Nevarez — both of whom were fatally shot by police last week in Illinois — before the group marched toward the football field.

“We’re opposed to racial discrimination,” he said. “And we need tens of millions of people in the streets to make change. So that’s why we’re here.”

Through chants and speeches, protesters remained committed to previous protest demands of defunding and abolishing UP, investing in community-based care and challenging the notion that police provide safety.

Protesters responded to one unmasked NIPAS officer by chanting phrases including “Wear a mask,” and “Masks are required” for about five minutes. One protester held out a mask for the officer to take, which the officer didn’t accept. He also coughed into his hand in front of protesters.

“Tell me why they like to call themselves part of (campus safety)?” one protester called out, referring to the officer. “How is this man keeping us safe without wearing a mask?”

Amid demands for abolition, Saturday’s protest drew attention to the protest’s location — the outskirts of NU’s first football game of the season. Around 8:30 p.m., a group leader updated the crowd on the activities inside the stadium.

“Northwestern is winning, y’all,” they said. “We’re winning the fight and the game.”

The group then responded with a continuous chant: “‘CATS NOT COPS!”

Three days before Saturday’s football season opener, senior safety JR Pace posted a video on Twitter in which he talked about his and other Black players’ experiences — including racial profiling and wearing team gear “just to signal that we belong.”

During Saturday’s demonstration, a protester said to the crowd they stand in solidarity with Black football players. Earlier that evening, the NU Black Student-Athlete Alliance released a message calling on the NU community to hear and support Black student athletes.

“When Black in America, the system is not for us, but we want to change that,” the alliance wrote. “We have a dominant representation in athletics and we want to be heard.”

Football players also wore pregame t-shirts printed with the words, “True change will only come once everyone in this country feels the same outrage as Black people” and a fist formed with the names of police brutality victims. On Saturday night, a former member of an NU athletic team addressed the crowd of protesters.

“The athletics department is racist,” the Medill senior said. “They don’t care about Black people. They profit off Black people.”

“The coach makes more than Morty”

A principal demand of the NUCNC protests has been to divest from law enforcement and invest in “life-giving institutions,” as Black student activists wrote in a June 3 petition to central administration.

Last week, NUCNC demonstrated alongside Students Organizing for Labor Rights to show where the University could reinvest funds, were it to divest from policing. Since April, SOLR has been fundraising for dining workers and demanding the University follow through on its commitments. The school announced plans in March to provide regular compensation and benefits to workers through Spring Quarter but failed to follow through.

In a July 26 letter to the editor, SOLR called on Schapiro and other administrators to take a pay reduction to make their salaries roughly equivalent to that of a full-time service worker — $30,000 — and redistribute the rest of the money to “service workers, underpaid staff and student workers.”

Schapiro’s total compensation for the 2017-2018 fiscal year was over $2 million, according to the most recent publicly available Form 990 filed by the University. In a May 11 email, Schapiro announced he and other central administrators were taking a 20 percent pay reduction, effective immediately. Assuming his 2020 and 2018 compensations were the same before the reduction, that would still leave his compensation for this year at more than $1.5 million.

But as a speaker reminded the crowd Saturday, as high as Schapiro’s compensation is, head football coach Pat Fitzgerald makes even more. According to the same Form 990, Fitzgerald’s total compensation in the 2017-2018 fiscal year was over $5.1 million. He also took a voluntary pay reduction in response to COVID-19.

“He makes all that money and at the same time Northwestern is telling us they can’t pay their workers and they can’t give them healthcare and can’t compensate them for COVID,” the speaker said.