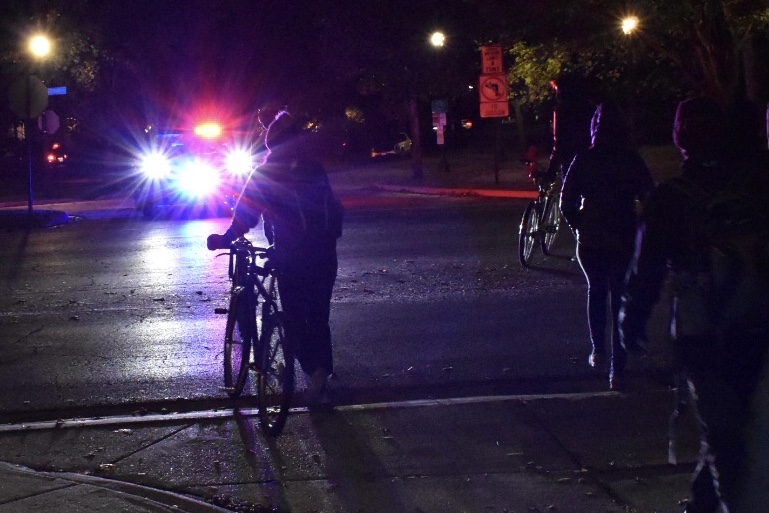 A student protester holds a bike while police officers watch.

After 11 days of protests calling for the abolition of University Police, NU Community Not Cops partnered with Fossil Free NU to host “A People’s History of Northwestern” — a Friday night event marking the group’s 12th consecutive day of action, recognizing past and present student activists at the University.

Formatted as a “parody” of a traditional walking campus tour, organizers led students between campus landmarks such as Lutkin Hall and the Black House, explaining the historic significance of those locations as they each fit into the arc of student activism on campus.

At least eight total police cars were stationed around the perimeter of the route, mostly on busy roads, marking a slightly decreased presence from earlier actions this week.

Over the past week, NUCNC has been a center of discussion on campus. A Saturday night protest resulted in multiple tagged buildings across both the Evanston Campus and the city, a broken window at the Whole Foods Market on Chicago Avenue and a burned banner. University President Morton Schapiro decried the group’s tactics in a Monday email after the protest ended at his house. Since then, the group has continued to hold events calling for the abolition of UP.

Fossil Free NU, a student activist group calling for the University’s divestment from investments in the top 100 coal, oil and gas companies, advocates for environmental justice across the campus. Friday’s action marked NUCNC’s second collaboration with an NU-based activist organization; the first partnership was a Thursday protest, which NUCNC hosted with Students Organizing for Labor Rights.

A united front for related causes

A student involved in Fossil Free NU, who preferred to remain anonymous for safety reasons, told The Daily the group collaborated with NUCNC because environmental justice cannot happen without racial justice. The climate crisis, they said, disproportionately burdens BIPOC. A 2018 Environmental Protection Agency report found people of color in the U.S. are much more likely than White people to live near polluters and breathe polluted air.

“Our goals are very much aligned,” they said. “At the end of the day, both groups want to envision a world where fossil fuels and police are not producing more harm to already-marginalized communities.”

The student said NU projects “an image” of commitment to diversity and sustainability that its actions — particularly, its use of the University’s endowment — do not support. While NU says its investments are not politicized, the student said “everything is political,” and the University has a high degree of economic power.

As a private university, NU is not required to disclose its investments or budget to students. But NUCNC and Fossil Free NU are calling for more financial transparency from the University.

“It seems hypocritical to say one thing and then do another,” the student said. “When people call (the University) out on those discrepancies, they don’t really give an answer. And there’s more silence and more bureaucracy.”

A tour through student action

At the start of the action, organizers held two minutes of silence for Marcellus Stinnette, a 19-year-old Black man who was fatally shot by Waukegan police Tuesday. Organizers said Stinnette’s story was yet another example of the ongoing police brutality in America — a central reason NUCNC is protesting.

The first stop on the tour was the intersection of Chicago Avenue and Sheridan Road, where Fossil Free NU held a protest on March 8. Protesters held the intersection for almost two hours while NU’s Board of Trustees met in person on the University’s Chicago Campus, calling for Board Chairman J. Landis Martin (Kellogg ’68, Pritzker ’73) to speak with representatives from Fossil Free NU on the phone.

The protests followed the Board’s denial of the group’s proposal, and a student organizer for the protest associated with Fossil Free NU said many of the University’s problems are caused by the Board’s relative inaction on social and climate justice initiatives.

“They control our $10 billion endowment and as such, they have ultimate control of the budget,” an organizer, who wished to remain anonymous for safety reasons, said. “In fact, it’s great for them that Morty is seen as the face of the University because they get shielded from public opinion.”

Next, the group circled in front of Lutkin Hall, where students protested the presence and beliefs of former Attorney General Jeff Sessions at an NU College Republicans event last November.

Protesters chanted around the building, hitting the door and screaming to drown out Sessions’ speech. One student climbed through a window and attempted to enter the auditorium. In response, officers grabbed protesters by their clothes and hair, punching them and throwing them around, bruising the students’ limbs, organizers said.

“We do not feel safe with NUPD,” they said. “How many students need to be brutalized, beaten and thrown for you to dismantle NUPD? Do we need to be murdered for you to care?”

UP identified protesters at the Sessions event through social media and issued citations to some students involved, organizers said. NU does not have a student protest amnesty policy in place. In Schapiro’s Monday email addressing protesters affiliated with NUCNC, he wrote, “If you, as a member of the Northwestern community, violate rules and laws, I am making it abundantly clear that you will be held accountable.”

Next, students visited Searle Hall to commemorate the Fund Our Care Collective, which formed in fall 2018 after sophomore Daniel Jessell died by suicide.

Students in the collective demanded the University increase the capacity of Counseling and Psychological Services, hire more LGBTQ+ and non-White counselors and lower credit requirements for some students, among other actions. After a Fund Our Care demonstration, the University hired two new counselors, created a task force and did “little else,” organizers said.

“Can I get a ‘F—k task forces?’” an organizer said. “The University has failed Black, brown, Indigenous, low-income and undocumented students time and time again. It uses these task forces to pretend like it’s actually doing something.”

The last stop on the tour was the Black House on Sheridan Road. Emblematic of some of the demands Black students brought to the University during the 1968 Bursar’s Office Takeover, one student organizer said students still don’t have as much access to the facility as they would like to.

Notably, multiple organizers have said the University has failed to address some of the demands from the Takeover, over 50 years later. One organizer said the University’s progress is driven by extended momentum of student-driven movements, without which, change will not be created.

“It is crucial that we invest in the longevity of our movement,” the organizer said. “Admin has and continues to placate us with task forces, committees and dialogues and hopes to graduate us out.”

Throughout the night, students questioned the double standard they said is applied to speech on campus. Citing events like the Jeff Sessions incident from last fall, organizers criticized the University’s definition of freedom of speech through its actions — and those it benefits.

“President Morton Schapiro, we ask: why do you selectively uphold freedom of speech when proponents of White supremacy are speaking?” a student organizer said. “Why is the safety and comfortability of your suburban lifestyle more important than the comfort and safety of Black, brown, Indigenous, Jewish and undocumented students on campus?”

Correction: A previous of this story misquoted an organizer from Fossil Free NU. The quote has been updated to accurately reflect the organizer’s statement. The Daily regrets the error.

— In Focus: Trustees and student activists at impasse after divestment proposal rejected