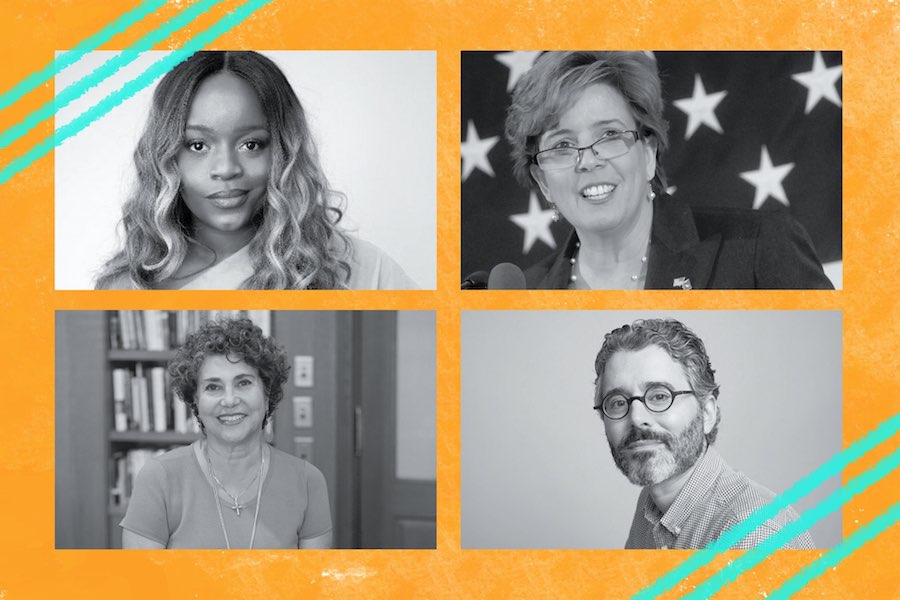 From a progressive to a moderate Democrat to a Republican, all of Sunday’s panelists came to a similar conclusion — President Donald Trump is a “dangerous man” to have in the Oval Office.

The 2020 Election Panel, hosted by Northwestern’s Contemporary Thought Speaker Series, included conversations between four prominent voices in American politics and touched on many topics pertaining to the 2020 presidential election.

The panel was moderated by Michael Barbaro, host of the New York Times podcast “The Daily.” Citing former Vice President Joe Biden’s double-digit lead over Trump in the latest national polls, Barbaro asked panelists if they “trust the polling” in light of the “collective trauma” experienced by many after the polls failed to correctly predict the outcome of the 2016 election.

“I do trust the numbers. It doesn’t mean, however, that there isn’t a path for Donald Trump to win this,” said Jennifer Horn, co-founder of The Lincoln Project, an organization of current and former Republicans opposed to Trump’s re-election.

Horn said Trump voters who were “under-polled” in 2016 are now registered voters, and therefore they “can’t be ignored by the polls” this time around.

Elaine Kamarck of the Brookings Institution said other elements have changed since 2016 as well, including better polling in swing states and increased attention of polling organizations to the impact of the Electoral College.

Barbaro also asked panelists about what explained Biden’s lead, as well as questions about election integrity and the Electoral College. Additionally, he asked each panelist a question about Biden specific to their political stance. He asked activist Brittany Packnett Cunningham of Pod Save the People and Campaign Zero if Biden is progressive enough.

Packnett Cunningham said though Biden is not progressive enough for her, activists will be better able to organize under the conditions of a Biden-Harris administration than under a Trump administration. She said she sees evidence of their ability to evolve on issues, especially in U.S. Sen. Kamala Harris’s (D-Calif.) voting record.

“The power of the people is something in which I always have trust,” Packnett Cunnigham said. “I don’t organize for candidates… I organize for conditions, and it’s very clear to me that the Biden-Harris ticket is a far better set of conditions for us than the ones we currently have.”

Following the panel discussion, each guest participated in a Q&A session moderated by NU faculty, and audience members could select in advance which one they attended. Highlights of the Q&A sessions are below:

In Barbaro’s Q&A, moderated by Medill Prof. Peter Slevin, “The Daily” host discussed his role as a journalist during the Trump era. Barbaro said one thing he and his colleagues at the New York Times have wrestled with is reporting on Trump’s dishonesty, which he said is “without equal” in the presidency.

He said it is “very rare” in journalism that you can say something is a “lie,” but that was the word used in the headline of his 2016 article about Trump’s claims that President Obama was not an American citizen.

“The decision to use that word and rarely use it since, no matter what you think of the president’s relationship with the truth, gives it greater value,” Barbaro said.

In terms of “The Daily” and election coverage, Barbaro said the team has made the decision to try to “demystify the voting process” and prepare listeners for “just how messy this election might be.” He said for the Times, the difficulty lies in having to send reporters out during a pandemic to make sure they’re not relying on “partisan figures” for information.

In a Q&A moderated by Medill Prof. Arionne Nettles, Packnett Cunningham called it a “travesty” that immigration hadn’t been discussed so far in this year’s presidential or vice presidential debates. Given how focused the Trump administration has been on punishing and demoralizing immigrants, she said immigration deserves far more attention in the electoral conversation than it’s getting.

As an organizer, Packnett Cunningham said she uses every tool at her disposal to get the change she wants to see in this country. Whether it’s through voting, protesting, attending city council meetings or donating to candidates, she said there are many responsibilities and actions to take as a citizen that Americans have to do “long after election day.”

“If you’re building a house and you’ve got a toolbox, you’re going to use every single tool in your toolbox to build it,” Packnett Cunningham said. “You’re not going to leave the hammer sitting right there. We are trying to build a house that houses and takes care of all of us — not just some of us.”

Horn’s Q&A, moderated by Medill Dean Charles Whitaker, was marked by the uncertain future of The Lincoln Project and its goals. Founded almost a year ago, she said the project’s mission has explicitly been to unite Republicans to defeat Trump.

She said what this country needs is constitutional leadership that puts the country above political parties, but how that could manifest is unclear. This election is not just a contest between Trump and Biden or Republican and Democrat but a test of the idea of “We the People,” she said.

“Will we come together and put that partisanship aside? Will Republicans come forward and vote for Joe Biden? WIll Democrats embrace the idea of a more moderate approach?” Horn asked. “Will ‘We the People’ step into this moment and do what is necessary and demand of our leaders what is necessary to preserve what is best about America?”

Political science Prof. Chloe Thurston moderated the Q&A with Kamarck, and asked her what reform, if any, should be done to the process of nominating presidential candidates. Kamarck said she has an “unpopular view” on the topic.

“What the nomination of Donald Trump shows us is that there is no break in the system. There is no failsafe in the system, that a charlatan can run, that a demagogue can run, get a plurality of votes and end up with the most delegates at the convention,” Kamarck said.

She said it is “inconceivable” that Trump would have been nominated if party leaders and elected officials had been involved.

When there are “no breaks in the system,” she said, extremist candidates are able to come to power, as Trump did. She said she would recommend having superdelegates make the “first cut” of candidates, because they have first-hand information on the individuals and if they are “qualified for the job.”