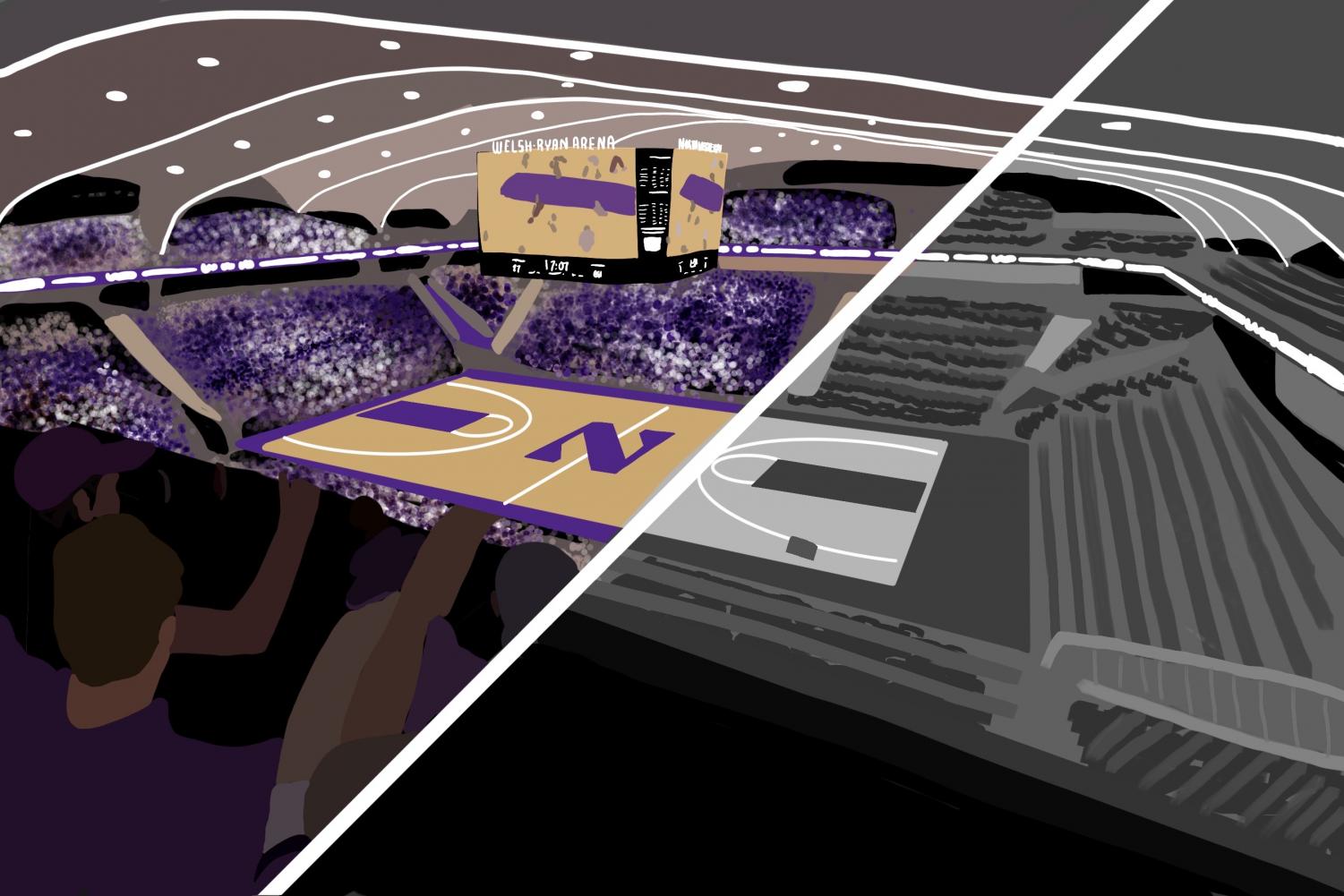 Welsh-Ryan Arena. Until 2021 the University can host for-profit concerts and professional sport events at the arena, but all events have been put on hold because of COVID-19. (Illustration by Carly Schulman)

Welsh-Ryan Arena. Until 2021 the University can host for-profit concerts and professional sport events at the arena, but all events have been put on hold because of COVID-19.

“Why should we trust you?”: Despite pandemic complications, residents remain opposed to for-profit events at Welsh-Ryan Arena, citing distrust with Northwestern

In September 2019, Northwestern submitted its final application to the city of Evanston to allow the university to host professional events and for-profit concerts at Welsh-Ryan Arena.

A question on the application asked, “In what ways is the proposed amendment compatible with the overall character of existing development in the immediate vicinity of the subject property?” In response the University wrote two letters: N/A. Not applicable.

“How could Northwestern’s application say it’s not applicable to say whether there was going to be an impact on property value or the neighborhood character?” Ald. Eleanor Revelle (7th) asked.

Revelle could not recall any time an incomplete application had passed through City Council’s chambers. That November, the zoning amendment passed, 5-4.

The change outlined in the amendment is an alteration to the arena’s U2 zoning ordinance, which will allow the university to host up to seven for-profit or professional events a year. That includes six single-day events and one multi-day event, not exceeding seven days, with a total capacity of 7,000 people per event.

The new amendment, which went into effect at the beginning of 2020, is a pilot program, lasting for two years and expiring at the end of 2021. Previously, the University could only hold seven multi-day non-profit events at Welsh-Ryan Arena each year, although they rarely exceeded a few dozen people per event, Revelle said.

But everything changed because of COVID-19.

Although NU’s football season will continue this fall in an altered form, the University cannot host any large-scale professional events on campus in the near future, including those that may have been held at Welsh-Ryan Arena.

Even amid a pandemic, many residents said the zoning amendment — and its possible implications — lingers in the back of their minds. Beyond just a zoning decision, they said the conflict is emblematic of trust issues between residents, the city and the University.

City Council has previously denied similar changes to the zoning amendment at least four separate times since 1975. The University has previously hosted a Grateful Dead concert, multiple volleyball matches and even a horse show, all of which violated the U2 zoning ordinance. In every instance, City Council has refused to change the rules.

However, university officials have said in City Council meetings and in their application for the zoning amendment that the arena and its surrounding environment have changed significantly from previous application periods.

Representatives said the refurbishment of Welsh-Ryan Arena has been one of the most significant changes in favor of the amendment. The arena, which was renovated in 2018, can now hold 7,000 attendees indoors and has an expanded parking area, they said in an October meeting. Additionally, since the amendment only lasts two years, they said, the change can be revoked if the city deems it unsustainable.

They also said the increased parking space will create a large enough buffer so as to not significantly affect the surrounding neighborhood — an issue that has caused problems previously, because street overflow parking can create congestion and hinder businesses from reaching customers.

But Revelle said many residents have expressed concerns about the lack of parking spaces around the arena, despite the expansion. She said dozens showed up to multiple council meetings, and many more sent her emails in opposition of the amendment.

In its application, the University claimed there were 2,000 or more parking spaces in the stadium. But Ken Proskie, an Evanston resident who lives near the arena, did not believe this number, so he and a group of residents counted the spots themselves. There were only 1,359 by the group’s count, Proskie said. Afterward, representatives from the University changed their estimate to 1,500 parking spots.

“[Northwestern] kept saying, ‘Trust us,’” Proskie said. “We were coming back at them saying, ‘Why should we trust you? You can’t even count your parking spaces right.’”

Without enough parking space, Proskie said hundreds of cars will park along Central Street, which has happened during large basketball games or other sold out events at the arena. The congestion caused by street parking can sometimes turn 15-minute trips into nearly an hour, he said.

More than just a convenience issue, the resulting congestion affects businesses as well. Over 50 businesses in the area surrounding the arena signed a petition opposing the amendment.

Karen Graham, the owner of Sew on Central, said when the street gets crowded, businesses suffer. Graham said nearby business owners know that football and basketball game days mean a loss in business. Because of the amendment, there are now 14 more potential days of lost profit to account for, she said.

“I don’t know anyone that lives in my area or any businesses that are here that feel they’re going to benefit from this,” Graham said. “Businesses, with everything going on with the pandemic, are going to get further erosion of customers missing.”

However, the pandemic has delayed these fears, Revelle said. Because of the unpredictable nature of the pandemic, she said it’s difficult to predict when the issue will impact residents. In the meantime, City Council has been looking into potential solutions, Revelle said. One proposed solution has been the creation of a resident-only parking area, though those plans have been delayed, she said.

The passage of the amendment speaks to a larger issue many residents have with Northwestern’s relationship with the city, Ald. Thomas Suffredin (6th), who voted against the amendment, said.

Representatives from the University told City Council that NU built the arena expecting to host professional events, Suffredin said. He asked the representatives why they would make this presumption, and even though the question was never directly answered, he felt the message was clear.

“Why wouldn’t Northwestern presume it’s going to get whatever it wants from City Council?” Suffredin said. “That’s the culture they’ve operated in for a very long time.”