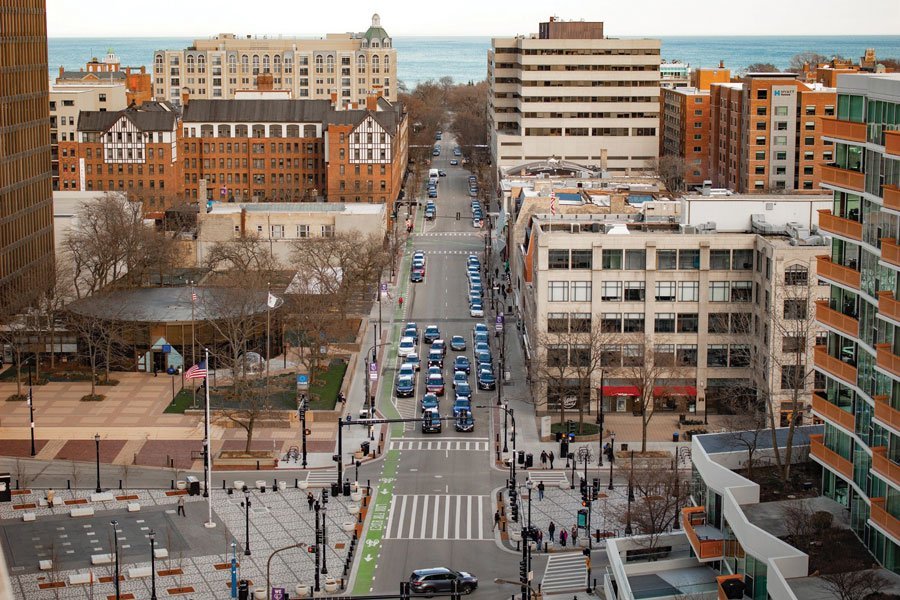 Downtown Evanston. During COVID-19, retailers have had to pivot their business methods to serve customers and stay afloat. (Daily file photo by Evan Robinson-Johnson)

Downtown Evanston. During COVID-19, retailers have had to pivot their business methods to serve customers and stay afloat.

Amid a pandemic and a recession, retail businesses pivot to serve customers

Downtown Evanston seems emptier than it was at the start of the year.

Walk down any street, and passers-by will notice signs advertising retail spaces for lease, covering the once-filled windows of shops long gone. In 2020 alone, around 70 businesses have closed so far, and nearly 40 of these closures were prompted by a shared problem: COVID-19.

Out of all the industries in Evanston, the pandemic has hit retail stores incredibly hard, causing mass closures and stalling the growth of recently-opened locations. Annie Coakley, the executive director of Downtown Evanston, said many restaurants had an infrastructure in place that allowed them to transition to pandemic service — but many retailers didn’t.

“Restaurants were working or at least operating throughout the actual quarantine and shelter in place because of their ability to do delivery and pickup,” Coakley said. “That’s a different world than regular retail where you couldn’t go into a store and shop. Some of our stores have online and some of them don’t… so regular retail has been hit so much harder than our restaurants.”

But the root of this problem doesn’t begin with COVID-19. Even before the pandemic, local businesses, especially retailers, were crippled by the rise of online shopping and the wave of big businesses moving into Evanston.

Paul Zalmezak, the city’s economic development manager, said these changes were incredibly impactful leading into the pandemic and subsequent recession.

“We were experiencing some dramatic and traumatic changes in the retail environment, and this has been going on for years because of the e-commerce competition,” Zalmezak said. “We’re seeing that at shopping malls, we’re seeing that around the country, and Evanston wasn’t immune to it.”

Amid this overcrowding, Nina Barrett, the owner of Bookends & Beginnings, has remained an advocate for local businesses and the “shop local” mentality. In April, Barrett published an op-ed in the Chicago Tribune calling for more support from the government for small businesses.

Barrett’s store, an Evanston favorite since it opened in 2014, had to change its business model when the pandemic hit. From the day Barrett closed her doors in March until Bookends & Beginnings’ reopening in July, the store was only taking online orders.

“We had to completely reinvent the business that we were in,” Barrett said. “What was good for us and gave us an advantage that a lot of other small businesses don’t have is that all along, we had a website that allowed people to order online not only anything that we had in the store, but anything that our very large distributor that we work with has in their warehouses.”

Barrett said one of her store’s biggest competitors, Amazon, was actually the store’s saving grace for a short time. Early on in the pandemic, the retail giant announced that it would prioritize essential deliveries over nonessential ones, like books. As a result, Barrett said her store saw an influx of online orders during that period.

However, it wasn’t enough in the long-term. The store was still bringing in less revenue than it would have with in-person shopping. To stay afloat, Barrett had to launch a GoFundMe to save her store — raising nearly $50,000.

Since reopening in July, Barrett has also opened a second storefront for Bookends & Beginnings. But she said she’s unsure of what the holiday season will look like, and that’s when her store brings in a significant portion of its yearly revenue.

Similar to Bookends and Beginnings, some other retailers have seen success because of their markets. The Spice House, a retailer with four locations in the Chicago and Milwaukee areas, was able to use its network to fulfill significant quantities of online orders, and has continued to do so after reopening its doors, Chasity Marini, the general manager of the retailer’s Evanston location, said.

Marini said the stay at home order meant many families were cooking from home, so they needed to purchase spices — a trend she wasn’t expecting, as she furloughed a significant portion of the store’s employees before bringing them back.

“There was a lot of fluctuation in the beginning,” Marini said. “And then when we did find this surge of internet orders, because we had the staff from all the stores, and because the stores weren’t having customers coming in, we acted like little fulfillment centers.”

Since then, Marini said the store’s revenue has evened out, and remains at a sustainable level. As a result, she said she foresees The Spice House weathering the pandemic and coming out the other side relatively unscathed.

However, fluctuating levels of COVID-19 cases in Evanston and across Illinois could mean a second stay at home order, which could force more stores out of business. Additionally, while federal aid helped some Evanston businesses in the early months of the pandemic, Zalmezak said the lack of a second stimulus package has left local stores to fend for themselves, with varying rates of success. He said he expects a second wave would be the breaking point for many businesses unless people change their spending habits.

Despite his concerns, Zalmezak said it’s only natural for people to want to be together — and shop together. As a result, he said he believes the businesses who weather the pandemic will be able to bounce back somewhat quickly.

“This digital thing we’re doing right now is only temporary,” Zalmezak said. “And when that happens, we’ll get back to business. The fundamentals were very strong going into the COVID pandemic, except for the retail world. And that was something that was happening, and we’ll adjust.”