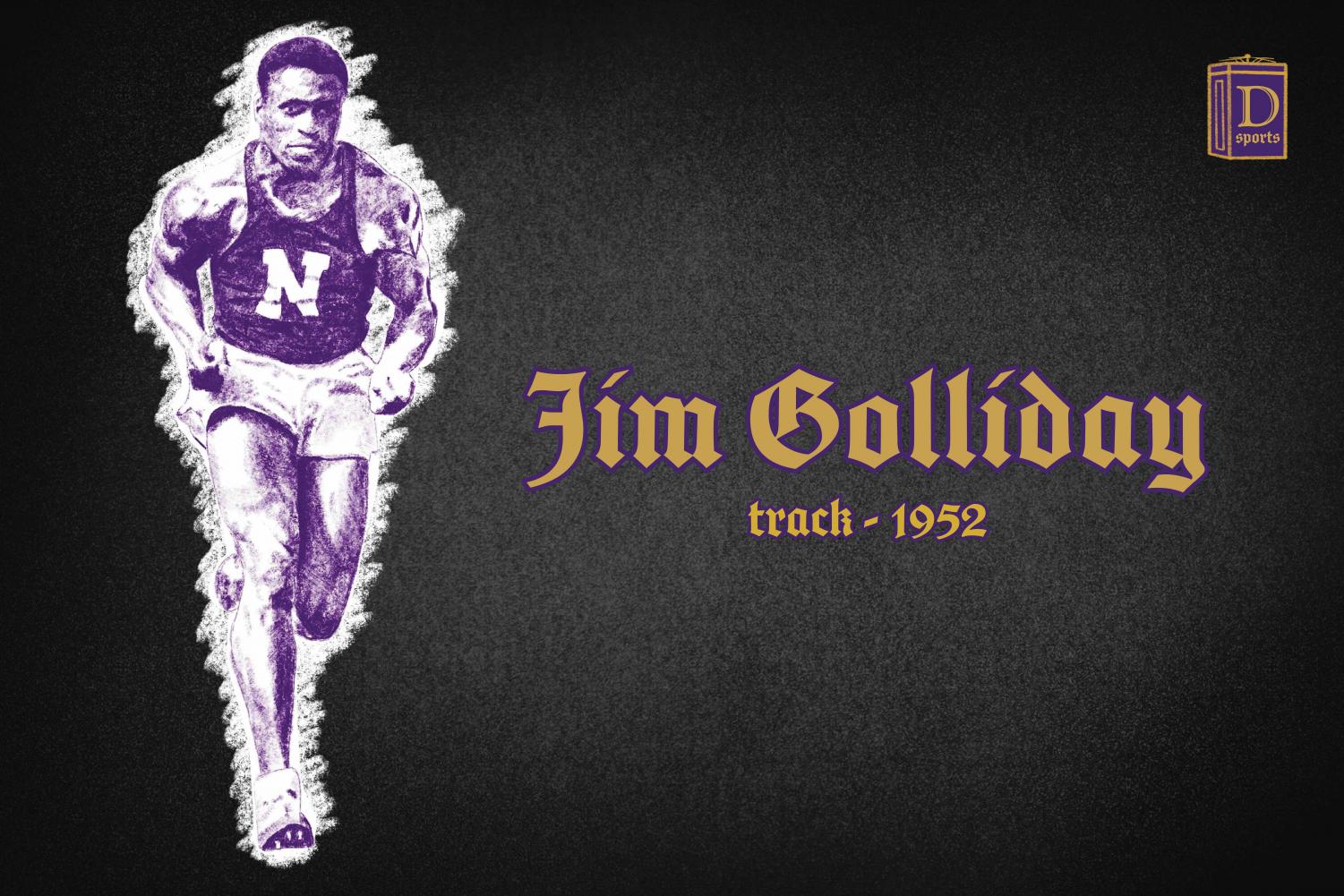 You should know the name Jim Golliday.

In a different world, Golliday’s name would be in the highest pantheon of the world’s greatest sprinters alongside Jesse Owens, Carl Lewis and Usain Bolt. He only started running competitively in his senior year of high school in 1950. But by the time he was a sophomore at Northwestern in 1952, he was the United States champion in the 100 meters and the favorite to win the gold medal in that event at the 1952 Summer Olympics.

“Golliday has been pointed out by the experts as the man most likely to smash all existing records before his career ends,” one newspaper report stated that summer.

“It is probable, highly probably, that he will prove to be the fastest man the world has ever known,” Wildcats assistant coach Rut Walter proclaimed.

Due to rules forbidding freshmen from competing at the varsity level, Golliday couldn’t compete for NU during the 1951 track season. But even though he didn’t compete for the Cats, he became a national name by winning the AAU national championship in the 100 meters and then starred on a national team trip to Europe. So when the 1952 track season started, Golliday wasn’t some unknown sprinter — he was internationally regarded as one of the best in the world. And he went out and proved it.

When the outdoor season started in April, Golliday continued his winning ways by claiming the 100-yard race at the Drake Relays. However, he suffered a slight muscle strain in the race, and injuries would loom in the background for the rest of the spring.

Golliday suffered his first setback at the collegiate level in early May at the hands of a high school classmate, Iowa’s Ira Murchison. Golliday’s pulled leg muscle proved to be the difference as Murchison edged him out. Murchison’s advantage wouldn’t last long, as Golliday defeated the Hawkeye two weeks later.

Next up was the Big Ten Championships. At this point, Golliday put his sole focus on the 100, electing not to run the 220-yard dash. Whether the decision factored into his performance on the track is unknown, but Golliday claimed the Big Ten title with a time of 9.5 seconds.

For the collegiate season, that left only one event before the Olympic qualifiers: the NCAA Championships. Golliday entered trying to become the first NU track champion since his coach, Walter, won the 440-yard dash in 1929. He cruised through the first two qualifying heats to reach the finals, where a tremendous start propelled Golliday to a convincing championship.

He was in great form and the heavy favorite to represent the U.S. in the Olympics, but sustained a groin injury the week before the trials. There was optimism Golliday would be able to recover in time, but when the time came, he pulled up lame during the qualifier and finished last, dashing his dreams for Helsinki.

Lindy Remigino — who finished fifth at the NCAA Championships — would go on to win the Olympic gold medal. After the race, Remigino was asked what it was like to be the fastest man in the world. The exact wording of his answer differs depending on the source, but here is how Pulitzer Prize-winning columnist Arthur Daley remembered it.

“Are you kidding?” Remigino said. “I’m not even the best sprinter we have. If Golliday and the rest of them had been in this race, I wouldn’t even be here.”

Golliday’s career after 1952 was a whirlwind. He worked out with the football team before the 1952 season, but he struggled with ball handling and did not play. Then, he spent two years in the U.S. Army. But he returned to campus before the 1955 season and proceeded to equal the world record in the 100-yard dash and win the 100-yard and 220-yard races at both the Big Ten championships and NCAA championships.

And while Walter said Golliday was in the best form of his life in March 1956, Golliday sustained another injury before the Olympic Trials that ended his second chance at Olympic glory.

Throughout his time at Northwestern, Golliday was considered the world’s fastest human on multiple occasions. He is the best sprinter in school history. You can make a case for 1951, 1955 and even 1956 as the best times to go back and watch Golliday.

Golliday had a standout career, but it will forever be defined by the “what-ifs.” What if he didn’t get hurt before the 1952 and 1956 Olympics? What if he got a chance to run on the world’s biggest stage? What if he did what most everyone thought he was destined to do and win the gold medal?

During the 1952 collegiate season, there were no “what ifs.” There were only “whens” — “When Golliday wins” and “When he stands on the podium in Helsinki” and “When he breaks another world record.”

Given the choice, I’d rather be engaged in that atmosphere, one of hope and excitement and belief, while watching Golliday blow past the competition.