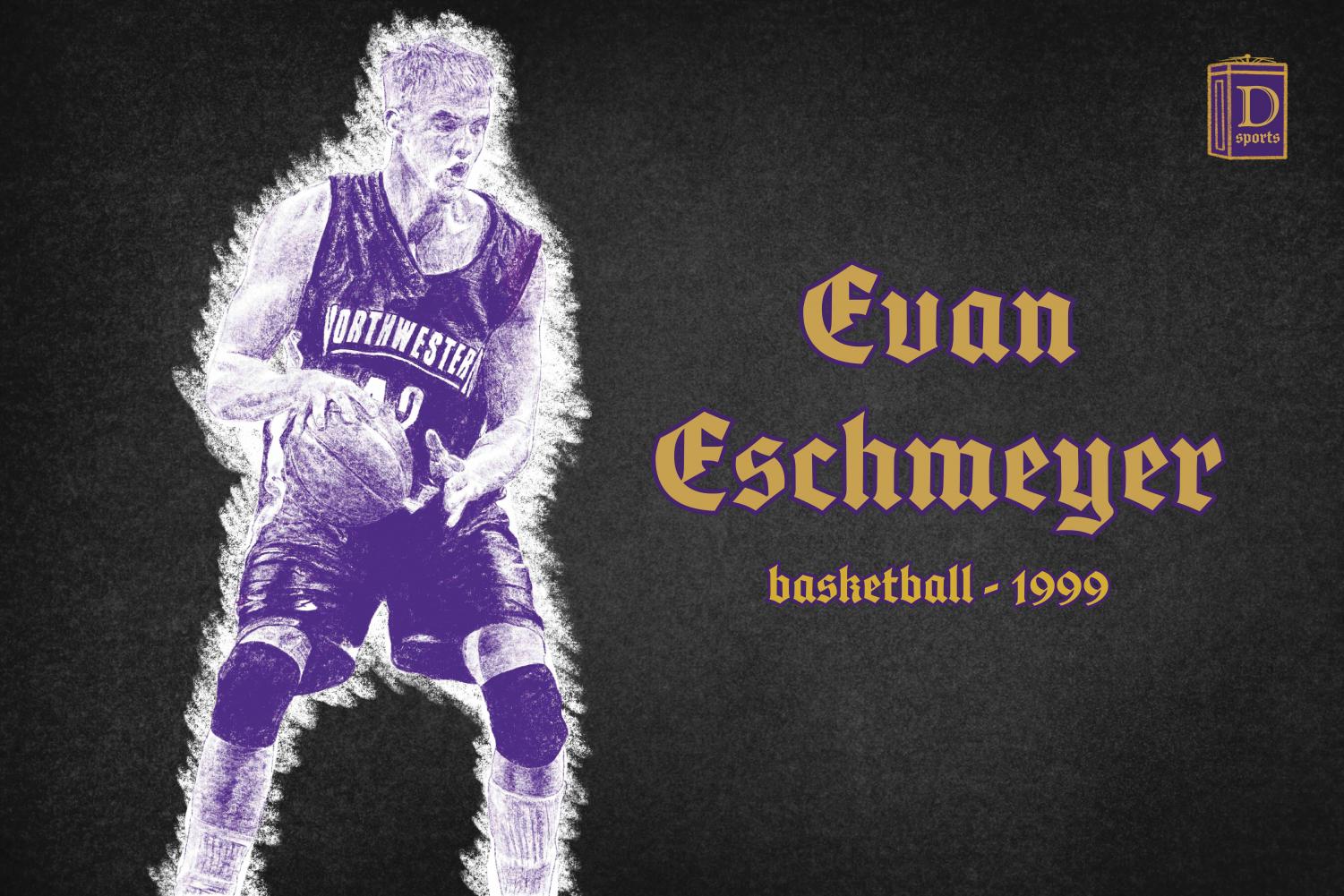 This article is part of the Northwestern Time Machine series, The Daily Sports Desk’s look into great individual seasons by Northwestern athletes.

The best Northwestern men’s basketball player of the AP Poll era was a 6-foot-11, 255-pound center from New Knoxville, Ohio. In four years in Evanston, he averaged 16 points and nine rebounds per game; in his final two seasons, he averaged 21 and 10. He scored 1,805 points in a Wildcat uniform — more than twice the number of residents in his hometown.

I knew a little bit about Evan Eschmeyer before I came to Northwestern. The ESPN College Basketball Encyclopedia praised his “arsenal of classic post moves” and placed him in an all-time Cats starting five. He is listed alongside some noteworthy names on the 1999 All-American team, including Elton Brand, Richard Hamilton and Andre Miller.

There is an element of unreality about Eschmeyer, as if he were a character my friends and I had spun into existence in a video game — “Hey, what if Northwestern had a big dude from rural Ohio who just dominated?”

That is why I would jump at the chance to see someone from Northwestern play college basketball at the highest level, be discussed as potentially the top center in the NBA Draft, and go No. 34 overall to the New Jersey Nets, becoming the only NU player to be drafted since the draft was contracted to two rounds in 1989.

A YouTube search for Eschmeyer yields, as its first result, a video from Eschemeyer’s high school days in 1993. Eschmeyer’s New Knoxville team is playing Fort Recovery in a playoff game. The center is a man among boys, but Fort Recovery leads 78-70 in the closing seconds.

Fort Recovery misses a free throw, and Eschmeyer ends up with the ball. He dribbles straight down the court and jumps to slam home the final points of his high school career.

In doing so, he completely shatters the backboard.

Flecks of glass litter the court. The crowd explodes as the shocked announcers dub the event “a first for high school basketball in our area.” The officials end the game, and Eschmeyer’s high school career with it.

It would be two years after that highlight before Eschmeyer stepped on the court for NU. One foot injury, then another, delayed his collegiate debut; when he finally did play, a January 4, 1996 Daily article noted that Eschmeyer had “more fouls than defensive rebounds” as the Cats slogged through a 7-20 season.

But Eschmeyer grew into the college game, and it soon became apparent that NU had a star on its hands. In 1997, Eschmeyer was named to the all-conference First Team. In 1998 the Cats improved from 7-22 to 10-17, and Eschmeyer averaged a double-double. Another All-Big Ten First Team selection followed.

And then came 1999. “Senior center Evan Eschmeyer is NU’s primary weapon,” wrote The Daily on November 17, 1998, “but the Wildcats think that they have surrounded him with a strong enough supporting cast to prevent teams from double- and triple-teaming him on nearly every possession.”

By December 27, the Cats had equaled their win total from just two years prior. Taking place against the backdrop of this success was a string of masterclasses from Eschmeyer. In January, he put up a triple-double at Indiana, pulled down 21 rebounds against Penn State — the most by a Northwestern player in 33 years — and blocked seven shots in a home victory over No. 14 Purdue.

By February 9, the team The Daily christened the “Evan Eschmeyer Institute of Basketball” was 14-6 and beginning to eye the program’s first-ever NCAA Tournament. But just 18 days later, the Cats’ tournament hopes were fading. NU had dropped six consecutive conference games, and even after a win over Penn State in the opening round of the Big Ten Tournament, NU was merely “(holding) out hope for the team’s first NCAA bid,” the College Basketball Encyclopedia wrote.

Northwestern faced No. 2 Michigan State in Chicago on March 5, looking to steal an upset and, potentially, a tournament berth. The Spartans were an intimidating outfit, already laying the foundations for their 2000 national championship. The game was hard-fought. Cats coach Kevin O’Neill “ranted and raved throughout the game at both officials and his players,” according to the Associated Press. Eschmeyer put up 30 points, and with 3:06 remaining, NU led 59-56.

Suddenly, Michigan State woke up. The Spartans tied the game at 59, and then MSU legend Mateen Cleaves made a floater over Eschmeyer with 37 seconds left to give Michigan State the lead.

Steve Lepore missed a desperation shot at the buzzer, and the Spartans survived, 61-59. Michigan State coach Tom Izzo heaped praise on the Cats, saying, “We were outplayed. We were outhustled and that hasn’t happened to us in two months.”

“They deserved to win the game and we won the game,” he continued.

Cleaves edged Eschmeyer out for the final spot on the AP All-America First Team. The Cats settled for the NIT, losing 69-64 in the first round against DePaul.

Fast forward to 2000, the setting of the YouTube search’s third result. Eschmeyer is a rookie for the Nets, who are at home playing the Raptors. Midway through the third quarter, Toronto’s Tracy McGrady powers home a vicious dunk. Standing beneath the Hall of Fame forward on the play is the same Evan Eschmeyer that once shattered the backboard in Wapakoneta.

If the first clip shows Eschmeyer’s beginnings, the third shows his unfortunate end. His NBA career was short — 153 games in all — and he averaged just 2.8 points per game as a pro, 17 percent of his collegiate average.

But in between, he was nothing short of extraordinary. An All-American. The fourth-best player in the country measured by win shares. An NBA draft pick. At Northwestern! Eschmeyer was, as that announcer in Ohio may have put it, “a first for basketball at our school.” And to this day, even though NU has made the NCAA Tournament, there hasn’t been anything like it.