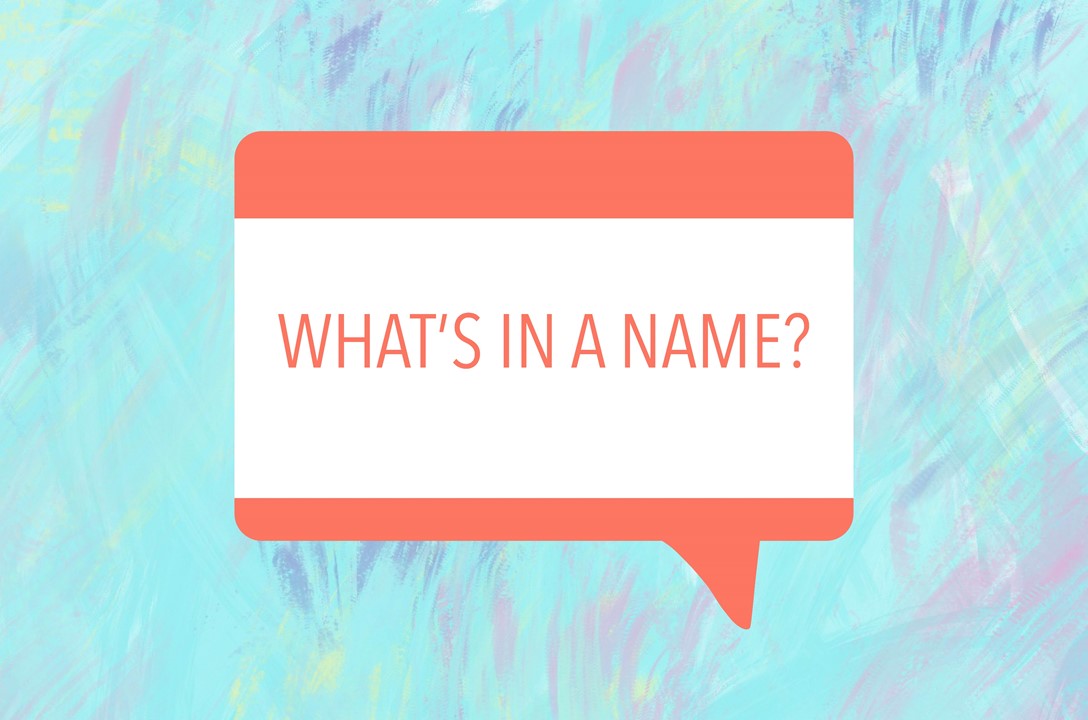 What’s in a name? On navigating the complexities of changing your name

There is one question that has plagued me for the past three years. It’s a question that follows me everywhere and is virtually inescapable whenever I have to introduce myself in any situation.

“Is that really your name?”

It’s an entirely valid and understandable question. I would probably ask the same thing to someone else if they had a name like mine.

My name, as far as anyone is concerned, is Sadd Sadd. Really, it should just be one ‘Sadd,’ but school systems require you to write down a first name, as well as a last name, so it’s stated twice.

I never have a good answer when people ask why I have two of the same name. I could say: “Well, it’s my last name,” but that always warrants the follow up question: “Then what is your first name?”

You can see why this is difficult. If I offhandedly mention that I dropped my first name, people want to know why. People, being the nosy creatures they are, want to know what happened to me that was so astronomically bad I can no longer associate with my first name. Instead of explaining the whole story a thousand times over, I figured I’d write the story out for anyone who wants to know. 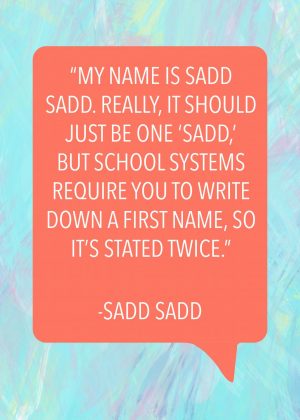 My hatred for my first name started at a very young age. In kindergarten, I instructed everyone to call me “James,” the name my dad has and the name my brother shares with him. I felt like that name properly represented me too, but others didn’t feel the same way, and it didn’t stick. By first grade, I tried to make the switch to “Karate Snake III” as a prospective new name, but to my suprise, that one didn’t stick either. After that, I abandoned my mission and spent the next 11 years begrudgingly accepting my given name, “Sophie,” even though the word made me feel like crawling out of my own skin.

At that age, I didn’t know I was transgender. For all I knew, I was the world’s most convincing tomboy. In second grade, I would tell my friends that I was going to get “the surgery that made me turn into a boy” when I was older. At that time, I was just making up fantasies, unaware of the real possibility.

Fast forward to age 11. I hit puberty early, and it was traumatic. The main points I remember from this time in my life are memories of me violently pulling and pushing on my breasts, praying that if I bruised them enough that they’d go away— or at the very least, stop growing. My friends, who were all boys at the time, distanced themselves from me as my body changed and started differing from theirs.

Discovering what the word “transgender” meant was both a liberating and terrifying experience. Though I felt relieved to know that I wasn’t alone in my struggle with identity, I didn’t have the same optimism I had in second grade.

The last thing I wanted to do was transition.

In 2012, transgenderism was not nearly as normalized as it is today. The only publicity that the transgender community got came from documentary channels that made money by exploiting taboo, clickbait-y subjects — lumping in trans documentary films with “Married To The Eiffel Tower: In Love With An Object” and other films of the like. I, like any other middle schooler who already didn’t fit in, did not want to subject myself to further ostracization.

For the next year or two, I fought with myself to repress what I knew was true and became the most feminine girl I could possibly be. I watched makeup tutorials on YouTube like they were homework assignments and made lists of things I wanted to change about myself, so I could convince people that I was really female. Outwardly, it worked. For the first time in my life, I had embodied what the name “Sophie” suggested.

But the battle with myself took a serious toll on my mental health. For a long time, I was in a very dark place. The encouraging comments I got from my peers for “growing out of the tomboy phase” didn’t distract from the pain I felt from gender dysphoria like I thought they would. Regardless, I didn’t feel strong enough to better myself, until I mustered up the courage to come out to my mom as transgender, while still at my most feminine point. It did not go well.

At the time of my name change, I was just about to start my junior year of high school. I knew I didn’t want to be referred to by my old name any longer, so I sought out the Dean to help me change my name on my rosters and school emails. We ran into a prominent issue: I couldn’t change my name in the school system without getting parental permission. With my parents and I fighting over my need to transition on a regular basis, I wasn’t ready to have that conversation with them. School was my safe space, where I felt understood and respected, and home was where I was repeatedly invalidated and discouraged from transitioning. I knew another conversation about changing my name would not end well.

My name is a loophole that stuck around. Knowing I couldn’t use anything but what is on my birth certificate, I asked the Dean if I could have my name changed to just “Sadd.” She told me that was fine, but I would have to also put it in as a first name because the school needed two names in the system to perform basic functions. I figured that was the best we could do.

In close friendships and relationships, I’ve tried using different first names, but nothing ever sticks. I feel like a “Sadd,” so I’ve had no reason to change my name — that was, until recently.

When I came back home this quarter due to the pandemic, I didn’t know what my parents were going to call me. At that point, I had accepted that they wouldn’t acknowledge my transition.

But that wasn’t the case. My parents still aren’t completely supportive of my transition, but they’ve learned to accept it. Ever since I have been home, my parents have been calling me “Sadd,” a name and identity I never thought they’d respect.

Seeing my parents actively try to use my name and pronouns has meant the world to me. I’ve felt very alone and isolated throughout my transition, but I’m starting to feel like my family wants to be included in the creation of my happiest self. 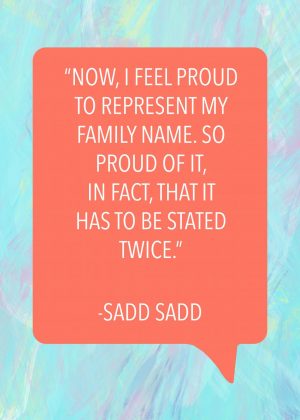 It used to be OK for my name to be “Sadd Sadd” because I felt so separate from my family that was never a true burden. At Northwestern, people don’t know about my history or my relationship with my family, so I don’t mind playing my name off as if it were the name I was given. Having the same first and last name only ever affected me, so I never felt a need to change it. Now, things are a bit different. As I hear my mother, Mrs. Sadd, talk about her son, Sadd Sadd, on the phone, I realize that my name is no longer just awkward for me but also for those who share the same name. I am no longer the only one being bombarded with unanswerable questions. My family is, too.

I’m not sure when I’ll change my name or how I’ll choose a new one, but I hope my parents are a part of the process this time. Our relationship has gotten infinitely better since I started college, and I have high hopes that it will only get better from here on out.

Now, I feel proud to represent my family name. So proud of it, in fact, that it has to be stated twice.