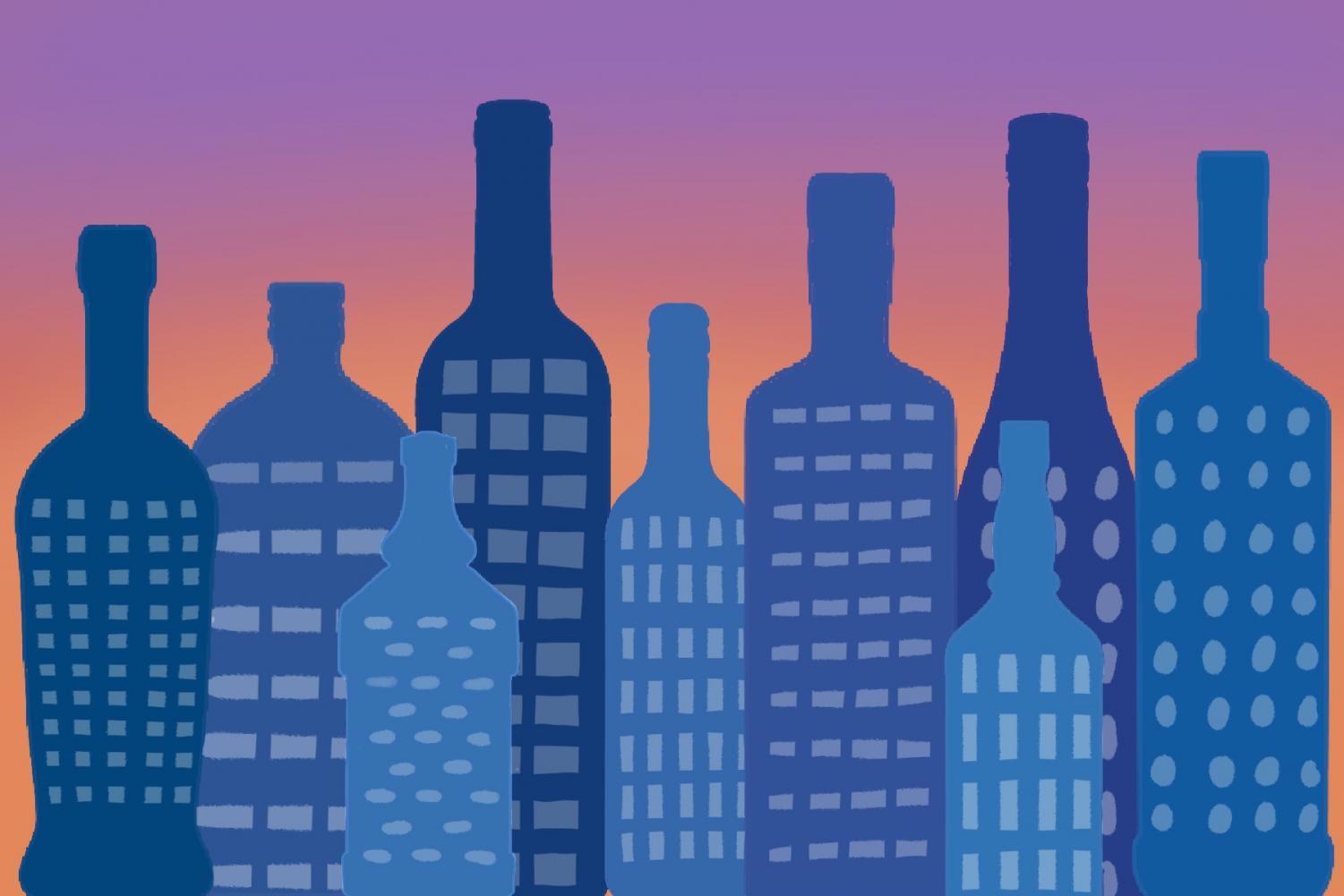 I’ll drink to that: A history of alcohol and temperance in Evanston

It’s a Friday night, and you and 50 of your closest friends are huddled together outside Mark II Lounge. After constantly checking your phone and complaining about how long you’ve been waiting, you finally make it to the front of the line.

When the bouncer lets you in, you walk into a warm, sticky cloud of sweaty, crammed college students.

This is a scene familiar to many students on Northwestern’s campus, mostly taken for granted. But just 50 years ago, Evanston was a completely different town, one where a night like this seemed nearly impossible.

Since its founding in the 1850s until 1972, Evanston was a dry town. For a significant portion of its existence, strong anti-alcohol sentiments shaped Evanston’s culture, sentiments that trace back to Northwestern University’s founding. And since then, the debate has continued, most recently with controversy regarding alcohol service at Welsh-Ryan Arena.

Before Northwestern’s charter was approved on January 28, 1851, the area now known as Evanston had few inhabitants.

Northwestern purchased the land the University currently sits on, as well as some portions of downtown Evanston, which the University sold back to new residents to fund construction. Because it was the most influential presence in the area, Northwestern and its founders shaped Evanston’s culture. Thirteen years later, one of Northwestern’s founders and the city’s namesake, John Evans, was involved in the Sand Creek Massacre, an event in which U.S. Army soldiers killed approximately 150 Cheyenne and Arapaho Native Americans.

In 1855, the University’s founders requested a change to Northwestern’s charter: they wanted to forbid the sale of alcohol within a four-mile radius of the University. The Methodist founders didn’t face much backlash from the area’s inhabitants, many of whom were also religious. And so began Evanston’s status as a dry town.

Lori Osborne, a historian at the Evanston History Center, said the appeal of a dry town was rooted in the sense of community it created.

However, residents would start to challenge these standards in the 1880s as new people flowed from Chicago to Evanston. New homeowners pushed back on the idea of a dry town, and a growing working class added to the conflict, Osborne said.

“People want to live in a dry town because they want that quality of life of a town apart from the raucous big city of Chicago,” Osborne said. “They like the idea of that quality of life — there are no bars and no saloons in Evanston — but they don’t want people policing their own private habits.”

Though Evanston had always been a dry town, the embodiment of the temperance movement came to town with Frances Willard. Willard, a suffragette and former educator, was a founding member of the Woman’s Christian Temperance Union, serving as the group’s first secretary starting in 1874. Five years later, Willard became president of the organization, a role she would hold until her death.

A longtime Evanston resident, Willard brought the national temperance movement to the city, and after her death in 1898, she donated her home to the WCTU, which continued to have a significant presence in Evanston.

Osborne said the organization’s presence, and the national influence of the temperance movement in the early 1900s, can be attributed to the impact alcohol had on families.

Earlier in Willard’s activism, anti-lynching activist and journalist Ida B. Wells claimed Willard invoked stereotypes of black men who abused alcohol and threatened women in order to build support for WCTU causes in the South. Though the organization’s chapters held many African-American members, Willard’s comments and failure to speak out against lynching stayed with her for years.

For years, the WCTU encouraged Evanston residents to campaign for temperance. The organization held multiple local chapters in the city, and each would host and advertise different temperance-themed events, such as essay-writing and public speaking competitions. These campaigns were effective, aligning with the beliefs of many Evanston residents.

Prohibition went into effect in 1920 as a result of the 18th Amendment, meaning that at last, the rest of the nation matched Evanston’s status as a dry city. The majority of Evanston residents supported the 18th Amendment, and residents voted again after Prohibition’s end in 1933 to remain dry — a status it would keep for decades to come.

From a dry city to a wet city

Everything would change, however, in 1972. That year, Evanston City Council would approve a liquor ordinance, allowing businesses to apply for liquor licenses starting on Jan. 23.

The vote passed 11-6, with the WTCU and other organizations still pushing back on the change. The mayor at the time, Edgar Vannemann Jr., even refused to sign the ordinance.

Osborne said competition with neighboring suburbs sparked the discussion. Areas like Skokie, which permitted alcohol, had thriving downtown scenes, so debate leaders championed the transition from a dry town as a move to save Evanston businesses.

However, to this day, Evanston continues to uphold more restrictive liquor license regulations than other cities.

“The community has changed in those years, and that idea that you need to have this blanket prohibition has changed too,” Osborne said. “But Evanston still doesn’t allow alcohol the way Chicago does — there are still limits that mark Evanston as different.”

Osborne said despite the entrance of alcohol into the picture, the city wanted to continue to preserve the same quality of life it had as a dry town.

Ald. Eleanor Revelle (7th) moved to Evanston in 1973, soon after the ordinance was passed. Revelle said even after businesses could apply for liquor licenses, the growth of the Evanston alcohol industry was gradual.

“When we first moved, the places that could sell alcohol were very limited,” Revelle said. “You had to get a meal, and Evanston expanded that very gradually, and that probably helped the community accept it.”

The debate, fueled by lingering tension around alcohol restrictions, resurged this year. In February, City Council voted to allow sales at Welsh-Ryan Arena after months of conflict.

Revelle said residents voiced concerns about safety in opposition to the proposal, since the arena lies near multiple Evanston neighborhoods.

“If anybody would get hurt because of a drunk driving incident caused directly by an attendee of one of these events, they should know that the city needs to be held liable for this, and Northwestern should be held liable as well,” Evanston resident Yvi Russell said at a November 26 council meeting.

However, Revelle said there’s been a boom in restaurant life since Evanston permitted alcohol sales.

Josh Gilbert, the founder of Temperance Beer Company — Evanston’s first brewery — said the city supported his business since the beginning. He said residents and elected officials were excited when he first proposed bringing the brewery to the city.

“I grew up here and graduated from ETHS, and about half of the staff have as well,” Gilbert said. “Evanstonians are very proud of Evanston, so I think it was important that we had those connections in the community.”

Gilbert said the brewery has become a place where people can socialize without the cost expectations of a restaurant, which makes it accessible to the community. Temperance has also become a political hub, hosting events like a Mayor’s Town Hall in October and a political discussion series called The New Saloon.

Osborne said Evanston will continue to grapple with its identity as it relates to alcohol, and the city will continually strive for balance.

“This debate isn’t just in history,” Osborne said. “It’s part of our daily lives, really trying to define what it looks like… How do we enforce regulations that protect people’s rights, but also make this community that we want to have happen?”