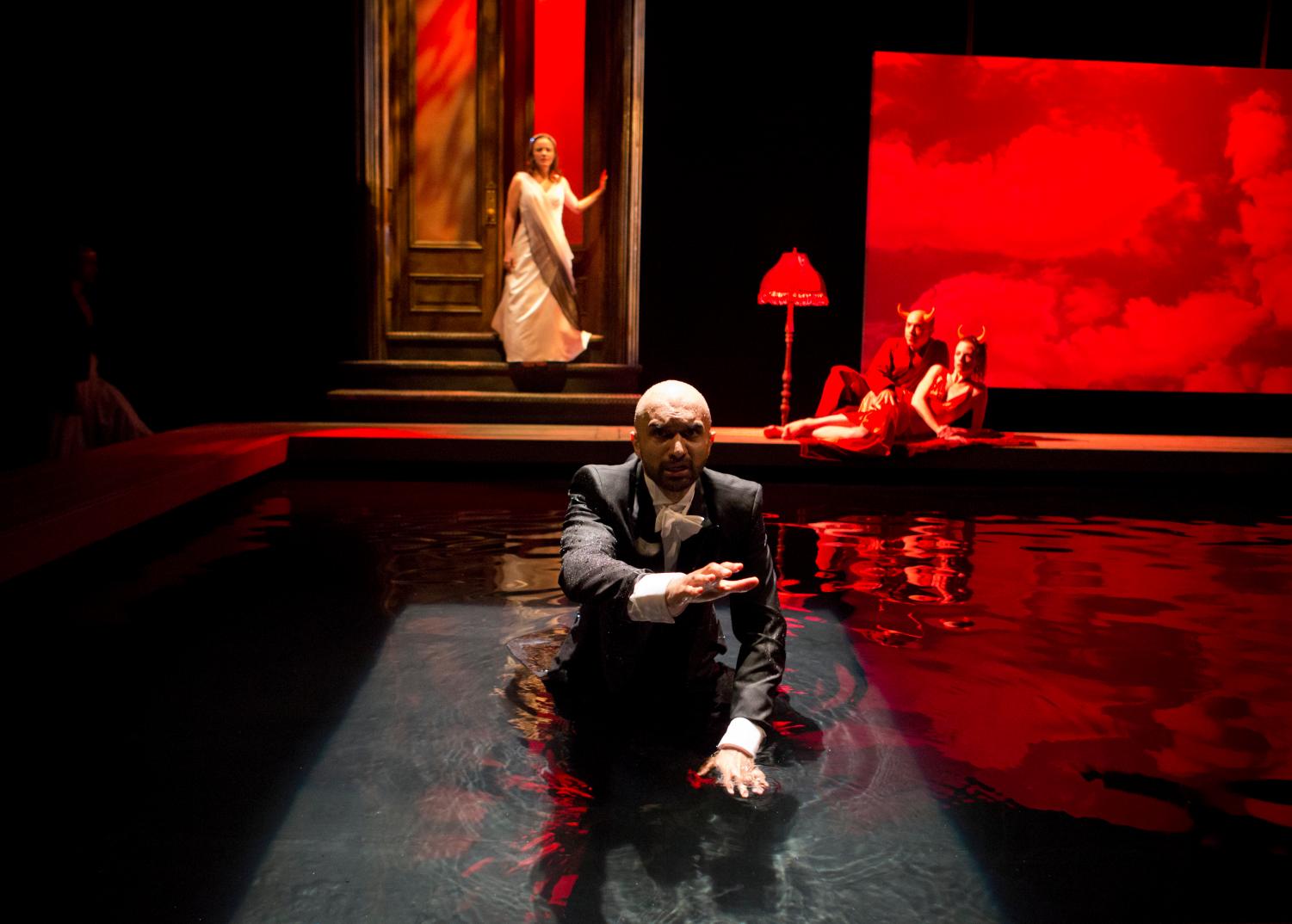 The 2012 production of “Metamorphoses” at Lookingglass Theatre Company. The theater company was founded by Northwestern alums after an experimental production of “Alice in Wonderland” in 1987.

A group of Northwestern students, led by David Schwimmer (Communication ‘88), put on an experimental production of “Alice in Wonderland” in 1987, inspired by a similar production at NYU.

The group took their “Alice in Wonderland” piece to the Edinburgh Festival Fringe that summer, and afterwards they decided to found a theater company dedicated to the ensemble-based, physical style of the production. That company grew into Lookingglass Theatre Company.

“The production was very, very theatrically inventive,” said Northwestern acting Prof. David Catlin, one of Lookingglass’ founding members. “We loved the kind of physical theater that we were doing, and that the underlying story had a literary source to it. We didn’t see any other companies in Chicago doing that kind of work, and so we decided to start a company.”

The theater has since grown into a major player in the Chicago theater industry, winning the Tony Award for Outstanding Regional Theatre in 2011. Lookingglass is currently closed due to the COVID-19 pandemic, causing its ensemble members to reminisce on why the company became their artistic home.

“There are lots of absolutely brilliant plays,” said Tony Award-winning director, frequent Lookingglass collaborator and performance studies Prof. Mary Zimmerman (Communication ‘82, ‘85, ‘94). “But if you heard them on the radio, you wouldn’t be missing much because what you’d be imagining is the kitchen or the living room or the backyard in which they are set. But in our shows, the physical manifestation image in the body is a bit more primary.”

Zimmerman’s process is unique among Lookingglass directors. She pitches an idea, and writes the script for each day’s rehearsal the night before. This allows her to be more impulsive with her work, and to be influenced by the present moment. Because this development process can be relatively risky, Zimmerman said collaborating with an acting ensemble familiar with her work and process helps nurture trust and a healthy environment.

Kareem Bandealy, Lookingglass’ New Works Manager, said that in his role he encourages directors and adaptors to tell stories from outside the Western literature canon so they can bring more diverse voices into the room. He tells adapters to stray from the original material and get to the core of what the piece means to them to portray it more effectively in the new medium.

“I remember watching David Catlin’s adaptation of ‘Moby Dick,’” Bandealy said. “It used to be so many characters, he excluded some from the book, but still it was this huge cast. Over time, he found the similarities between certain characters’ points of view and merged them into larger arcs. What I find most engaging in an adaptation is when I can hear the adapter in it, and you could tell he knew that material.”

Longtime ensemble member Raymond Fox (Communication ‘89) said Lookingglass’ interest in combining performance studies and theater helps make for stronger adaptive work, and this interest is fueled by the number of company members who graduated from Northwestern’s theater program, which explores the intersection between the two fields.

Because of Lookingglass’ established acting ensemble, Zimmerman said she often adapts work and creates characters based on the strengths of her actors. Instead of worrying about finding the perfect actor for a specific role, she said she can create, for example, singing roles for musically talented actors.

Fox said Lookingglass tries to cultivate creativity and encourages ensemble members to pitch projects unlike anything the theater has done before and couldn’t be done at other theaters. Any project that has the physical and visual sensibilities that fit the theater’s mission can be in their season.

“The assumption that underlies our ensemble ethic is that everyone is inherently creative,” said co-founding ensemble member Andrew White (Communication ‘87). “Everyone has creative impulses and everyone is welcome to participate. Everyone in the group feels empowered to come up with an idea and bring it to the table and bring it forward. It just feels right.”

Catlin said he sees Lookingglass as a community as much as it is an arts organization. Many members of the Lookingglass ensemble have been with the company since its inception or early in its establishment.

Fox has been in more than 10 productions of “Metamorphoses,” one of Lookingglass’ most famous and produced plays, during his time at the company, and he met his wife acting in the show. During the most recent revival of the play, Zimmerman put into the program that the show has resulted in three marriages and four children.

Though the company is not together physically, having closed indefinitely due to the COVID-19 pandemic, Catlin said the Zoom meetings the team has together remind him of the love and community he feels for not only the company members, but their families that they’ve seen grow over time.

Lookingglass used to be an entirely volunteer operation, and many of those original volunteers still work for and are involved with the company, according to White. Despite the insecurity over how and when the theater will be able to resume programming, White hopes the willingness of its ensemble members to stand by the company and the love the group has for it will help it survive the pandemic.

Many company members continue to return to Lookingglass even after they stop consistently participating in projects. White said the company, especially the founding members, have grown up together, and have experienced life together, making their personal and artistic relationships even more fulfilling.

“The longevity itself is a reward,” White said. “Getting to know people, and having a group of friends for that long. For almost all of us, it’s been our longest relationship, far longer than marriages and many other friendships. It’s been this enduring constant. I love continually being amazed by my colleagues’ creativity and seeing them continue to come up with brilliant ideas.”