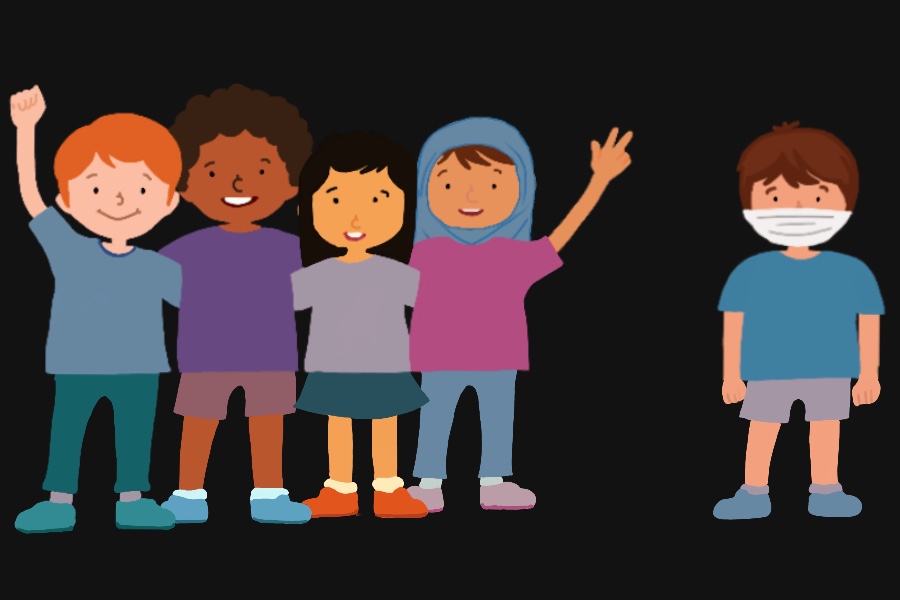 As D65 looks to the fall, parents of at-risk students say there are no good options

Claire Pritchard’s son was supposed to start preschool at Joseph E. Hill Early Childhood Center in October, soon after his third birthday. But due to COVID-19, he may not get that chance.

Pritchard’s son was born prematurely, resulting in a respiratory condition that makes him more susceptible to infections. Pritchard said she already limits her son’s contact with others during the cold and flu season, and COVID-19 has only heightened her concerns of exposure.

At an April 27 school board meeting, Evanston/Skokie School District 65’s interim superintendents Phil Ehrhardt and Heidi Wennstrom announced the district is exploring three potential plans for education in the fall. The district may continue online learning, return to in-person instruction with social distancing protocols or develop a hybrid method of learning.

But children with pre-existing conditions are often at a higher risk of COVID-19 related complications. For families like Pritchard’s, this reality is deeply concerning.

“Right before my son’s second birthday, we decided to go to a play group… One of the kids had a cold,” Pritchard said. “He caught the cold two days later, and it took him two weeks and an ER visit to kick that cold. If we’re in a situation where there’s a virus roaming around, and we have to be with a group of kids where hygiene is questionable, that’s a big risk.”

Concerns with a return

At the school board meeting, Ehrhardt said if in-person instruction resumes, the district plans to follow directives from the Centers for Disease Control and Prevention, state and local governments.

“(Reopening) will likely require safety precautions such as continued social distancing, wearing face coverings, frequent sanitizing throughout schools, and opportunities for regular handwashing,” Melissa Messinger, the district’s director of communications, told The Daily in an email.

Messinger added the district will evaluate ways to support immunocompromised students. But Pritchard, an educator who has worked in multiple Chicago-area schools, said she anticipates it will be difficult for teachers to enforce safe practices, especially when teaching young students.

For example, enforcing social distancing in schools could require decreasing the student-to-teacher ratio, she said. However, the district faces significant revenue losses for both the 2020 and 2021 fiscal years, and is implementing operating efficiencies, which could complicate the hiring of new teachers.

“(Social distancing) isn’t practical, nor is that sustainable, particularly at the Early Childhood Center where you’ve got kids who may be autistic or have sensory difficulties,” Pritchard said.

Pritchard said with her son’s respiratory issues, she is concerned about the idea of sending him to school wearing a mask. She also said cleanliness in early childhood schools can be difficult to maintain, and she would hesitate to send her son back to school without a strong plan.

Pritchard said, however, a hybrid or online-only system could affect young children’s long-term abilities to adapt to the structure of a school day.

According to the Learning Policy Institute, the classroom environment promotes academic, social-emotional and physical development for preschool students. Those who attended strong preschool programs were more likely to succeed academically later in life.

Schools also provide medical and therapeutic support for high-risk students and their families. However, with all instruction online, students can’t always get the same treatment.

Yesenia Heir is the mother of a 13-year-old student at Park School with Aicardi syndrome, a rare neurologic disorder characterized by a disconnect of the left and right halves of the brain, causing seizures and developmental disabilities. Heir said this shift in access to treatment has complicated her daily life.

At school, teachers and aides support Heir’s daughter academically, and a one-to-one nurse meets her medical needs. At home, the responsibility falls solely on Heir, and her daughter’s daily participation in class varies depending on her health needs.

“It took a few weeks to just get accustomed to her being home 24 hours a day, and not having that reprieve while she’s at school for myself to recharge and to be able to run all the errands,” Heir said.

However, Heir said the ability to see teachers and classmates has greatly improved her daughter’s mood and provided some sense of normalcy.

Pritchard said she is unsure of what her next steps will be if the district shifts to in-person education. Delaying entry into preschool or staying virtual may require out-of-pocket costs for therapy.

“If we want my son’s services to continue and all the therapy that he gets and not have to pay out the nose for it, our hands are tied,” Pritchard said. “We don’t get a choice in preschool.”

While online school is unfamiliar for most students, some families have previously dealt with lengthy absences from in-person instruction.

Dawn Ravine’s daughter is in seventh grade at Nichols Middle School and has a genetic disorder that causes heart and lung issues. Because she is at risk, Ravine’s daughter has had to stay home for extended periods of time due to illness — last school year, she stayed home for around 40 school days.

Though her daughter accessed some assignments teachers posted on Google Classroom to try and keep up, Ravine said this paled in comparison to in-person classes.

Ravine’s daughter, who asked not to be identified for privacy reasons, said she appreciates the normalization of online learning, but is concerned the district won’t continue to provide it after the pandemic ends.

“My one concern is that when school opens back up, if I’m home, they won’t do the same thing online,” Ravine’s daughter said. “Because not everyone is using it at that point, they won’t feel a need to set it up and keep it updated to the same level.”

Ravine said the school’s online learning proves high-quality education from home is possible. As a result, she might consider keeping her daughter home as a preventative measure — a possibility she previously dismissed.

She said she hadn’t considered the possibilities the district implemented before COVID-19. Now, Ravine plans to push the district to expand its virtual learning programs for students with health conditions.

“I’m grateful now to have the awareness that it’s possible,” Ravine said. “I was just asking, ‘how did I not think of this sooner?’ How did I not realize this was something I could have asked for, and how did nobody offer this to me?”

Since the beginning of the pandemic, many parents have had to monitor their exposure to the virus. Mary Otts-Rubenstein, the mother of a “medically fragile” preschooler, said she and her wife both have to be especially careful when leaving the house.

If she or her wife become ill with coronavirus, she said it would be hard to find caregiving assistance for her daughter. Currently, only her daughter’s pediatrician and nurse have the knowledge about her daughter’s medical needs required to step in.

Otts-Rubenstein said she hopes to see some systematic change, as most people have now seen some of the day-to-day challenges she and families with at-risk children face.

“For the last couple months, parents of typical kids have gotten to experience a fragment of what it’s like to be a parent of a medically complex kid,” Otts-Rubenstein said. “I just hope when we get to the other side, people don’t internalize that as their experience, but they realize there are those of us who have had this before this pandemic ever happened, and will have this forever after.”