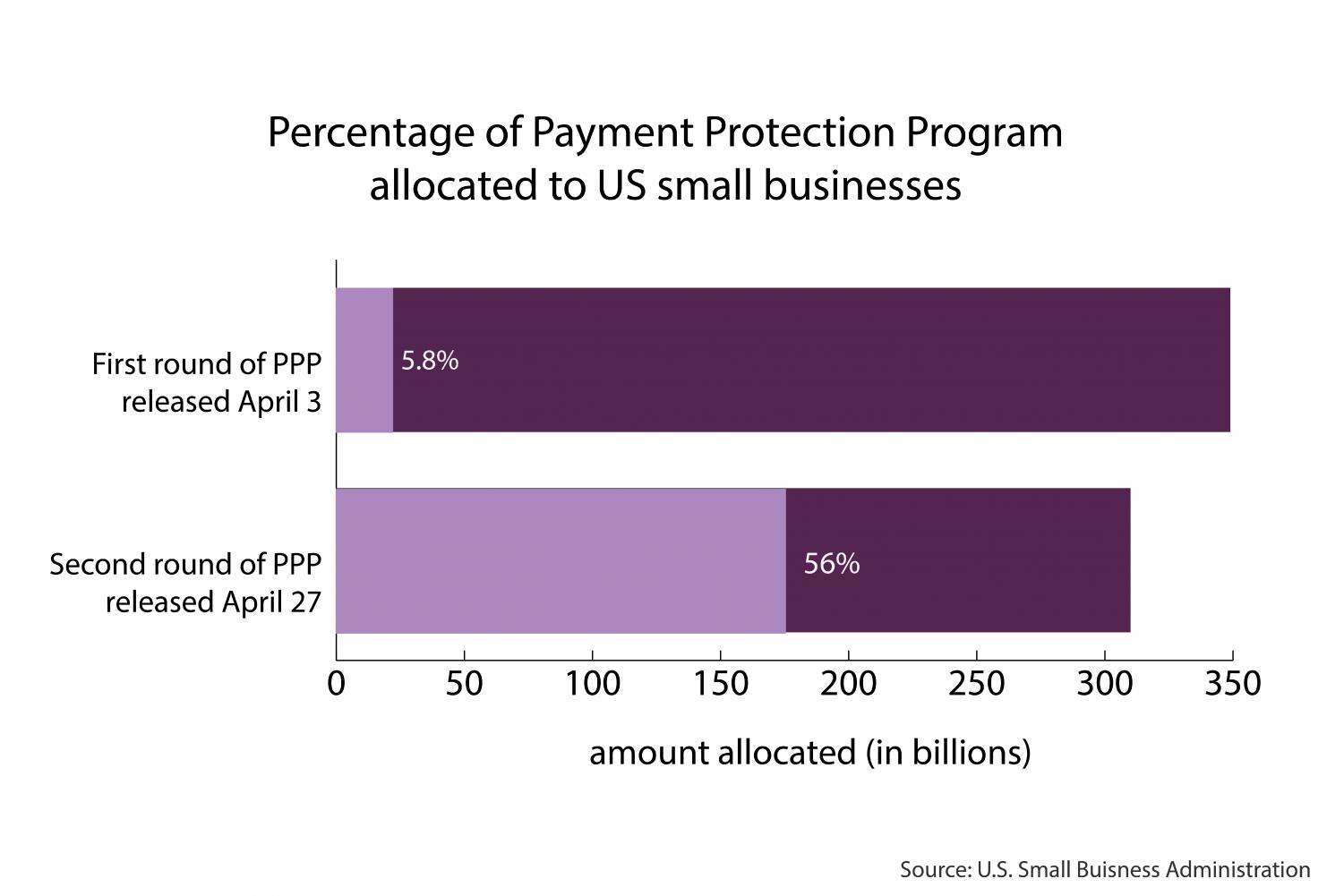 The cooking school and event space, located at 2113 Greanleaf St, was hosting birthday parties every weekend, and its summer camp had sold out for the first time since the store opened 18 months ago. Now, owner Mamata Reddy needs to refund most of her event deposits. She said she’s missing what could have been the school’s most successful months.

Reddy applied to several sources of funding, but has been rejected from all of them. She isn’t alone — most small businesses in Evanston have yet to receive any financial aid from their banks or from the government’s Paycheck Protection Program, according to a city survey.

Designed to benefit small businesses, the first round of PPP aid was released April 3. The program ran out of funds in less than two weeks. Applications for the second round of funding came out April 27. Of the 53 percent of small businesses across the country that applied for relief funding in the first round, only 6 percent received funds, according to the National Small Business Chamber’s COVID-19 National Small Business Survey.

Following the stay-at-home order, Reddy transitioned her business into an online platform where families can buy at-home cooking kits. Although the shift has generated some income, Reddy said business needs more financial support.

“I don’t see it happening,” Reddy said. “I feel like there are too many small hoops to jump through.”

Reddy said she thinks she hasn’t qualified for loans because her business only employs two workers. Through the Economic Injury Disaster Loan Program, one main source of federal funding for small businesses, the government distributes funds based on “economic injury,” which tends to correspond to revenue size.

The problem, Reddy said, may lie in what the $2 trillion CARES Act defines as a small business: those with fewer than 500 employees.

The New York Times reported about half of America’s nongovernment workers belong to small businesses, with most of these businesses employing under 100 workers each.This definition leaves small businesses in Evanston to compete for funds with publicly traded companies with hundreds of workers.

“The small businesses we’re talking about are ‘mom and pop’ in comparison,” said Jean Murphy, co-founder of the Black Business Consortium of Evanston North Shore and co-owner of YoFresh Yogurt Cafe. “They hardly had a chance in comparison to the larger business that got the bulk of those dollars.”

MSNBC reported that black-owned businesses have a 95 percent likelihood of being denied a loan from the PPP. Evanston business owners have also raised equity concerns about funding distribution.

Georgia Parker, owner of Ashley Lauren Natural Products, said despite being a business customer with Chase Bank for 21 years, she has not received the financial help she needs to pay employees, buy materials and pay rent.

“Banks such as Chase, Bank of America and Wells Fargo have failed to give smaller, especially black-owned businesses like mine access to the funds from the stimulus package,” Parker wrote in a letter to multiple news outlets.

“I applied for the economic injury loan on day one at 11:59 when it first opened,” she said. “If I have excellent credit, why have I not heard from Chase Bank or SBA?”

A question of finances

In some cases, Evanston businesses find spending the forgivable loan more difficult than qualifying for it. For example, loan forgiveness requires businesses spend at least 75 percent of the funds on payroll.

Murphy said if she received a PPP loan, business would still be too slow to provide her now-laid-off employees with enough hours and pay to match the unemployment checks they currently receive.

“I think those who conceptualized this were not familiar with businesses and employee struggles,” she said.

Reddy said she will continue to develop new ways to generate revenue instead of spending that time applying for relief funding that may never come. .

“I have two small children and a working spouse,” Reddy said. “I have to get up every morning and decide where my energy is going to be spent. Do I continue wasting time and energy on that?”

Despite the financial hardship, many Evanston small businesses are still supporting their community. For example, Spoonfoolery customers could buy meals for healthcare workers through the cooking school’s website.

Tracy Hoffman, owner of Evanston Imprintables, said she has received more support from her client base than from the local and federal government. When she applies for loans, it seems that funding wells are perpetually dry.

Looking to the future

Though her business has received community support, Murphy said it’s hard to be optimistic about business right now.

“Today is a good day,” she said, referring to the number of customers purchasing from her cafe. “But then there’s tomorrow.”

For Evanston’s small businesses, the financial effects of the pandemic won’t end when the stay-at-home order lifts. Without profitable spring, summer and early fall months, winter could hit these businesses hard.

Reddy said she worries about how much the government will continue borrowing on the backs of younger generations through deficit spending. For now, she’s focusing on the present.

“You just have to sit in it and wait,” Reddy said, “Then, you have to figure out how you’re going to adjust. I feel like the world at large doesn’t quite understand our undertaking right now.”