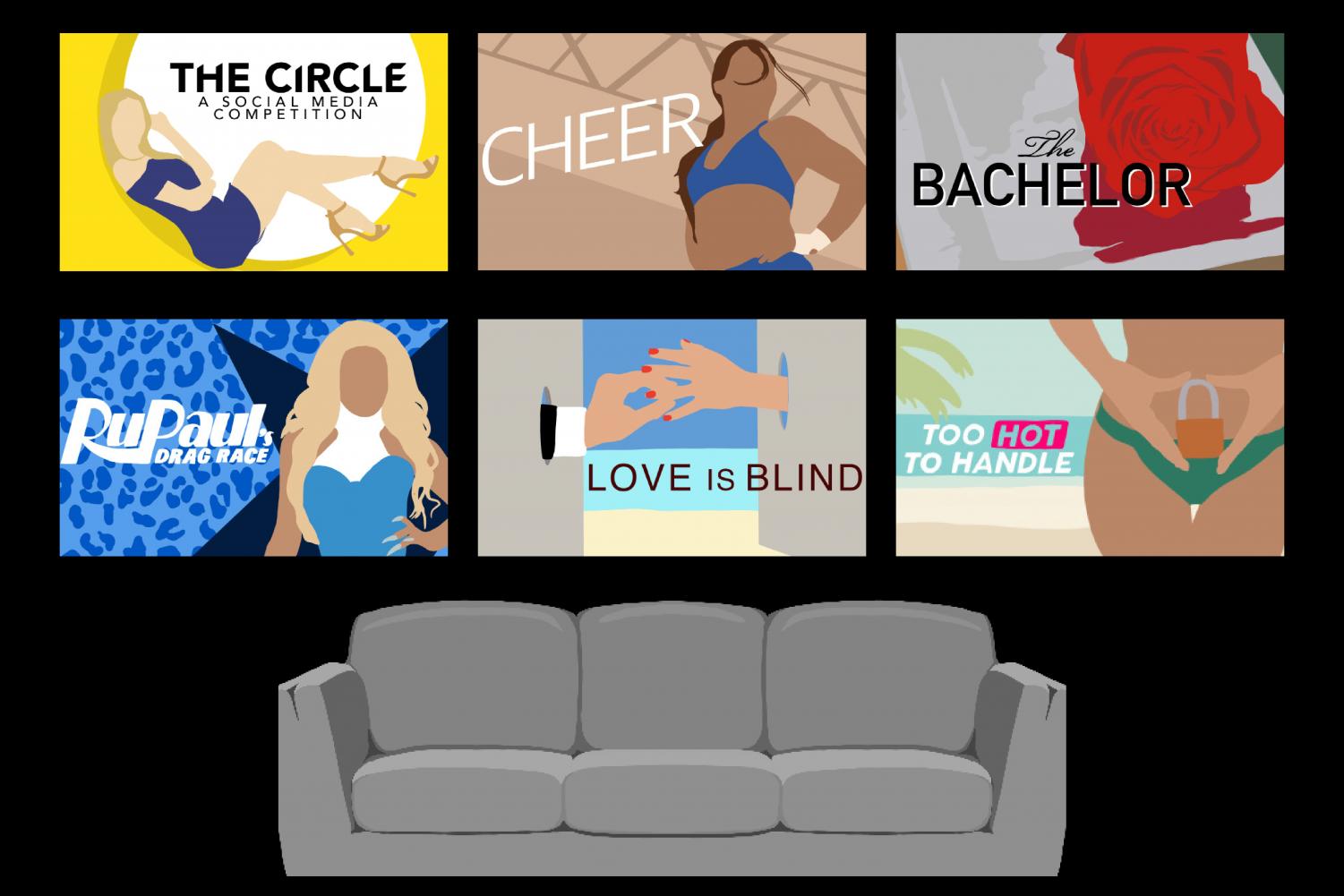 Reality Check: Why I can’t stop watching unscripted TV shows during this pandemic

I know absolutely nothing about competitive cheerleading. I can’t do the splits, I have little interest in watching any sports and I’ve always been suspicious of people who genuinely enjoy physical exercise. But it only takes a few episodes of Netflix’s “Cheer” before I’m yelling, “Let Jerry on the mat, HE DESERVES IT, COACH!” with tears streaming down my face.

Reality shows have captured the attention of hundreds of millions of viewers for over a decade. Watch parties for popular franchises like “The Bachelor” and “Survivor” are common for many friend groups. Yet in a 2018 national survey by Morning Consult and The Hollywood Reporter, respondents rated reality as the least favorable TV genre. The top three words associated with it? Fake, trashy and meaningless. I myself have always thought of so-called unscripted television as a guilty pleasure that demands far too much time and emotional energy. But since the coronavirus pandemic has made going to my backyard feel like taking an exciting vacation, I’ve got plenty of mental real estate for drama. My to-watch list has expanded ambitiously to include new offerings like Netflix’s “Love is Blind” and “The Circle,” as well as seasoned hits like “RuPaul’s Drag Race” and “Terrace House.” 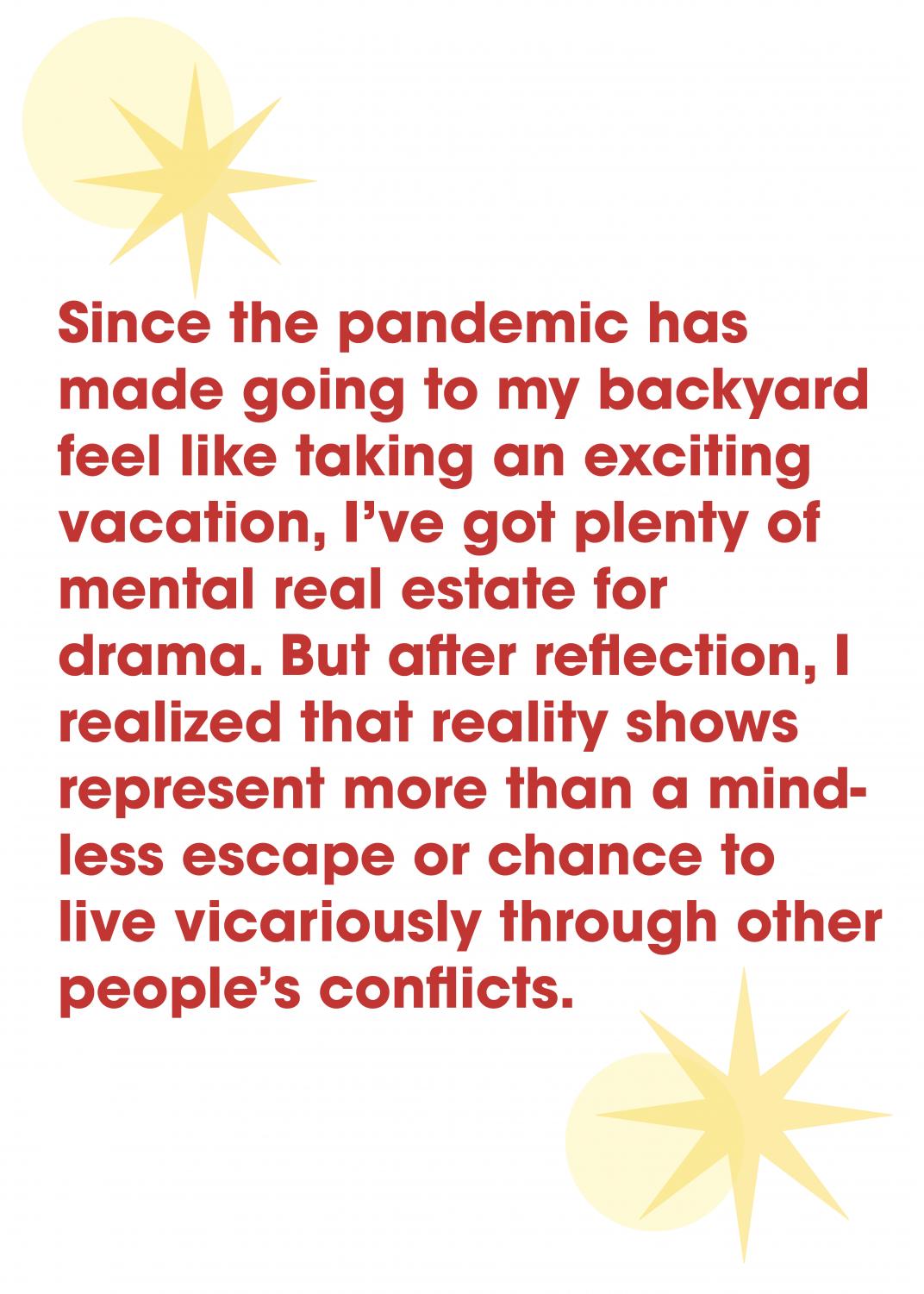 Currently, I’m obsessed with season 2 of “Youth With You,” an iQiyi reality talent competition shot in China’s Guangdong province. Viewers vote to select nine girls who will form a new pop group, out of over 100 trainees. I got invested quickly, following dozens of cast members on social media minutes after the first episode’s credits rolled. Then, a couple weeks ago, the show’s host announced that due to the coronavirus, performances would be held in quiet, closed venues rather than in front of cheering crowds.

Initially, I was thrown off — binging was supposed to distract me from the overwhelming outside world. We get to see people behaving in overly vulnerable or outrageous ways that they probably wouldn’t without the stress of constantly rolling cameras. Carefully-cast participants and exaggerated situations designed to heighten tension and conflict don’t normally feel “real.”

But after reflection, I realized that reality shows represent more than a mindless escape or chance to live vicariously through other people’s conflicts. First of all, viewers have the power to “vote.” For “Youth With You,” that means literal ballots, but with any show, following and supporting the people you like can help them receive more screen time in later seasons or create career opportunities. Though I’ll never be stuck on an island trying to avoid elimination or tasked with choosing who to date in an entire house of options, observing both my positive and negative reactions to people in those situations actually helps me understand myself and my values better.

For example, after being appalled by the bitter fights on the eighth season of MTV’s dating competition “Are You The One,”, I felt like a relationship expert, suddenly completely certain about my baseline standards for communication and honesty in a partner. My best friend sometimes discusses “Dance Moms” clips with me because she sees herself in the people who try to stand up to the Lifetime show’s instructor, who reminds her of a past toxic teacher. After declaring my support on social media for trainee Zhao Xiaotang, people I hadn’t talked to in years messaged me to talk about “Youth With You.” Xiaotang was told during her audition to smile and be more expressive, like other girls. Defending her as my top pick felt surprisingly personal, and I also gained a deeper understanding of others when they explained who they identified with or were most moved by.

I know I’m lucky that my pandemic experience so far is just staying home with my parents, with plenty of reality stars to virtually keep me company. I can continue watching “Youth With You” and cheer on the girls following their dreams, even as their dancing and singing lessons get moved to video calling platforms. And when the show’s over, I’ll carry the emotions and attachments I’ve made with me, even as I move on to a new group of people.

COVID-19 may or may not affect any of the other shows I’ll fall into in the coming days. But either way, I’ll keep watching. Even before this pandemic, reality TV has always made me feel a little more human, a little more sure of where me and my thoughts fit into the world. In a time where isolation and distancing are crucial, there’s nothing trashy or meaningless about that.