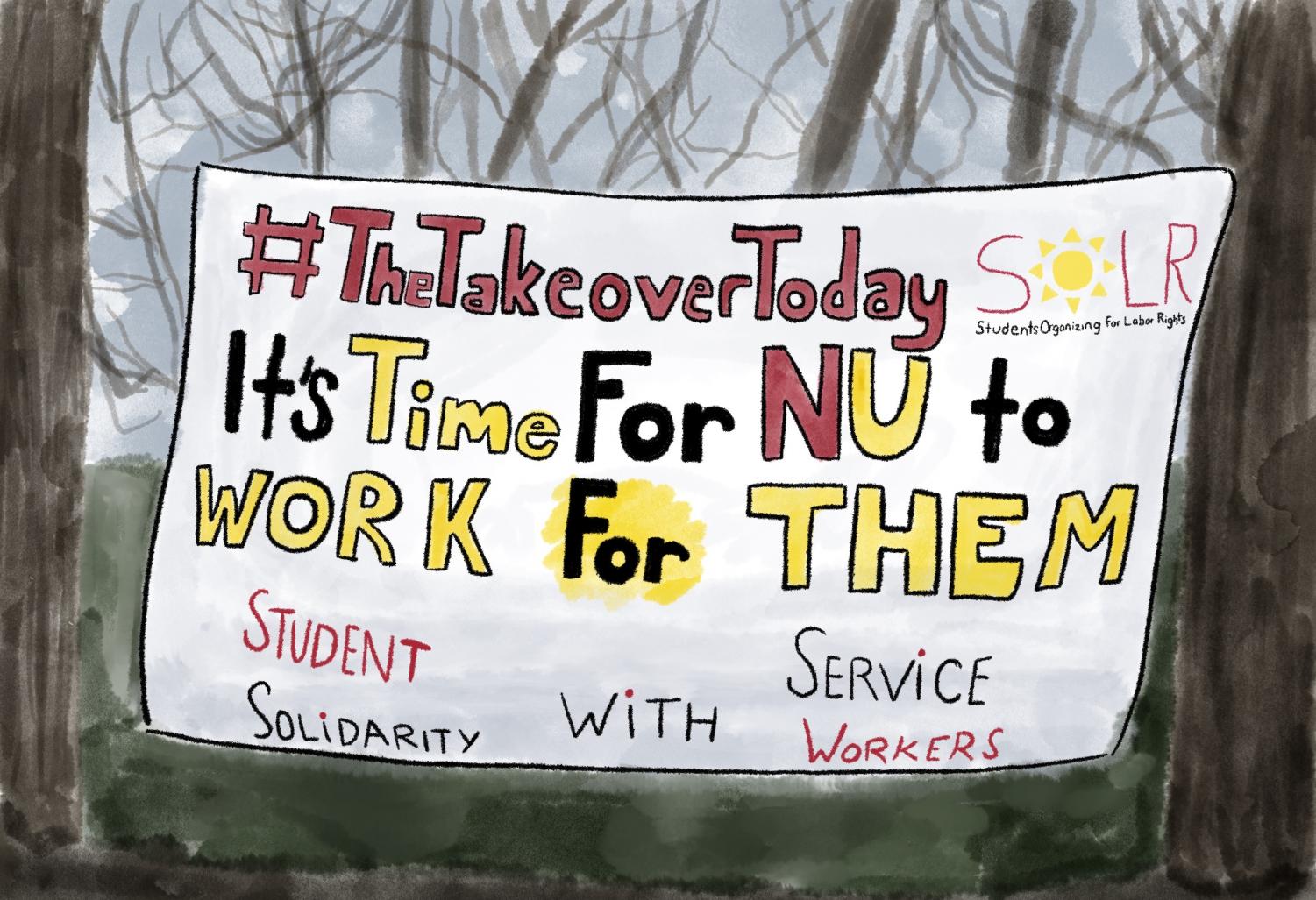 On March 30, the University announced plans to provide regular compensation and benefits to dining workers for Spring Quarter in partnership with Compass Group, the University’s food service provider. Three weeks later, Students Organizing for Labor Rights says these workers have not received any payment from Compass — and there’s no indication they will see the payment they were promised anytime soon.

Northwestern provides funds to Compass to cover benefits, University spokesperson Jon Yates told The Daily in an email Monday, and Compass then facilitates maintaining coverage through June 30. The University is covering the cost of benefits, Yates said, and, when coupled with state unemployment benefits and federal CARES Act dollars, the total amount will “more than equal” what most Compass staff received while working.

“We know that unemployment checks have been arriving for many impacted Compass staff,” Yates said in the email. “And federal stimulus funds are arriving by direct deposit or through checks that are still being processed.”

On March 13, two days after the University announced the extension of spring break and remote learning for the start of Spring Quarter, SOLR began raising emergency funds for Northwestern’s service workers. The student coalition reported raising nearly $3,000 in less than 48 hours to support Compass workers who were not granted sick leave outside of accumulated sick or vacation days.

“Workers need to have the freedom to stay home to prevent spreading COVID-19 to others or to take pre-emptive measures,” SOLR’s post on Twitter and Instagram read.

With more than 100 workers reaching out to the coalition for financial assistance, SOLR demanded one week later that the University and Compass take action to protect workers’ health and financial security.

Weinberg senior and SOLR member Allyson Bondy said given the University’s $10.8 billion endowment, it’s “ridiculous” for that money to pile up and not be used during a crisis like COVID-19. The University was also recently awarded $8.5 million in federal government stimulus funding, and administrators are currently evaluating the certification form and terms associated with the grant. That funding, she said, is another resource that could be tapped into to support employees.

“They should not be having an issue with the money that was planned to pay workers this quarter,” Bondy said. “They have the money to pay people, it’s just the matter of actually doing it.”

In addition, an April 18 letter signed by almost 90 faculty members from various departments was emailed to University President Morton Schapiro, Vice President for Student Affairs Julie Payne-Kirchmeier and Senior Vice President for Business and Finance Craig Johnson. The email, obtained by The Daily, asked administrators to ensure Compass “quickly settle on a plan” to pay workers in full.

Many of the workers are black and Latinx, groups that are disproportionately experiencing COVID-19 mortality, and are ineligible for unemployment compensation, faculty wrote. In addition to facing current general anxieties, “the workers are suffering… they worry about making ends meet,” the letter said. They went on to quote a cook and cashier who are struggling through the epidemic.

The University leveraged the federal stimulus package, which grants household relief in the form of $1,200 checks, to provide full-time compensation and benefits to hourly food service workers, according to the release. The University said this would “make certain” all hourly food service workers continue to receive benefits and compensation equivalent to their full-time wages for Spring Quarter.

In an April 3 statement, SOLR said the University’s promise to provide financial support to NU dining workers was empty. The University’s announcement, the statement said, was made without any communication between Compass workers or their union, UNITE HERE Local 1.

Additionally, SOLR criticized the University for only mentioning dining workers in their statements and excluding mentions of financial security for all NU service workers — including but not limited to maintenance, housekeeping, security guards, and other facilities staff members.

“Northwestern has done little to nothing to support and protect some of its most essential workers,” the statement read.

Noah Carson-Nelson, a research analyst at UNITE HERE Local 1, said in the three weeks since the University’s promise to pay dining workers, there has been “no indication” that workers are seeing payment from Compass Group.

Peer institutions like the University of Chicago have decided to continue paying food service, janitorial and security staff through the term. The university also stated that non-contract, temporary, seasonal and unionized staffers would receive additional paid leave for use in work disruptions caused by the pandemic. Harvard University announced March 27 it would guarantee pay and benefits to all employees and contract workers who experienced job disruptions after classes were moved online. This decision came after community activism similar to that of SOLR, as students circulated a petition demanding workers be paid adequately.

In an April 16 email, Schapiro reinforced the promise that NU would pay hourly food service workers the benefits and compensation they would’ve received for Spring Quarter. But Carson-Nelson said the union has not received anything new from the University or Compass in that vein and emphasized that no actual money has been going to workers.

The University’s email, Carson-Nelson said, ignored the fact that many workers cannot access unemployment money. Some workers who may have been eligible for unemployment benefits and stimulus money, they said, were laid off around the third week of March. They said the main priority is ensuring the survival of their workers at this time, which cannot be guaranteed unless workers are paid their promised wages.

Northwestern: Do the right thing. @compassgroupusa dining & hospitality workers at @NorthwesternU are an integral part of the University community. They deserve economic stability during #COVID19. #NUDoRight #1u #unitehere pic.twitter.com/BzGFay0s2e

“As of today, no workers have received compensation for the time that they would have been working right now,” Carson-Nelson said.

A deal falls through the cracks

SOLR member Bondy said although the coalition has now raised about $20,000 in support of NU service workers, it doesn’t have the capacity as a student organization to provide for the livelihood of hundreds of workers. Though the emergency fund SOLR organized in March is still happening, she said the members of SOLR are now focusing their energy toward holding administrators accountable and securing long-term pay for workers.

SOLR member Gabriella Johansson said mere benefits and not full wages will not be enough for many service workers to pay their bills. Though many workers have filed for unemployment, the SESP senior said some have not received their payments yet and others — mainly undocumented immigrants — are not eligible for them.

Johansson added that unemployment only pays for a certain number of weeks, which doesn’t ensure the financial security of workers who don’t know how long lockdown and social distancing protocols will last. Considering the uncertainties around whether Summer and Fall Quarter classes will be held remotely, and whether students will be returning to campus anytime soon, she said this increases the financial concerns of workers.

SESP senior and SOLR member Rachel Muir said UNITE HERE Local 1 has been helping to cover healthcare costs for subcontracted Compass workers who have yet to receive direct payments or benefits from the University. They said SOLR has been assessing the situation as an issue of workers’ lives and wellbeing, because many are at risk of losing their homes.

Many laid-off service workers, Muir said, are being forced to find other jobs at grocery stores or other essential businesses just to feed their families.

“Having more and more people needing to go out and work — despite the pandemic being as imminent and terrifying as it is for black, brown and low-income people — is putting their lives at risk, and the lives of the families and allies of their communities,” Muir said.

Clarification: A previous version of this story said Northwestern will receive over $8.5 million in federal funding from the CARES Act. The language has been changed to say Northwestern was awarded the funds to reflect that University administrators are currently evaluating the certification form and terms associated with the grant.