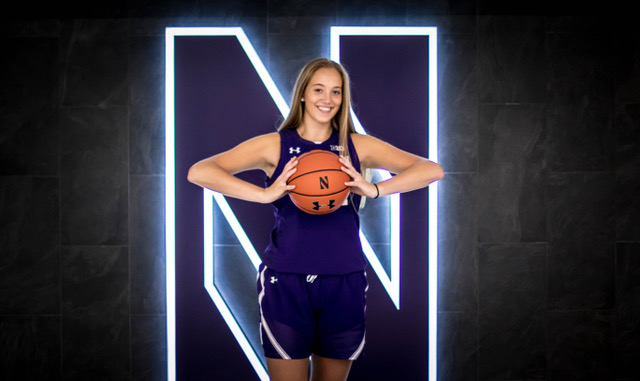 Anna Morris poses at Northwestern’s Welsh-Ryan Arena. The New Jersey native, a five-star recruit, will join the Wildcats next fall.

Women’s Basketball: “I’m excited to come in and be a part of this team”: How 5-star freshman Anna Morris can help lift Northwestern into Big Ten supremacy

As Anna Morris took the court for New Jersey’s Immaculate Heart Academy on March 11, she knew the stakes.

A win over Hudson Catholic Regional High School would give the Blue Eagles their ninth-straight sectional title. A loss, and Morris’ high school career would be over.

“Not only did I play well, but our team played really well,” Morris said. “We were really hoping to win the state championship this year, especially because we’ve lost it the last three years.”

Heading into the title game, Morris could potentially achieve the one thing that eluded her high school basketball career. Even though she received all-state, all-section, all-conference and all-county honors for four straight years and was named a five-star recruit by ESPNW, Morris had always wanted a state championship.

But 48 hours before tip-off, her high school career came to a shocking end. The championship game was canceled because of the rapidly spreading COVID-19 pandemic.

Despite the scrapped game, Morris finished her senior year on a high note as a second team all-state selection. Now, she hopes to translate her high school success on an Evanston court.

Morris, who signed with Northwestern in November 2019, is one of the best recruits in Wildcats history, ranked as the nation’s 46th-best high school player. The Mahwah, New Jersey native, who can dominate opponents defensively in the post and drain 3-point shots, will be one of the most intriguing players on a Wildcat squad that hopes to repeat as Big Ten champions.

Because NU’s All-Big Ten frontcourt of Abi Scheid and Abbie Wolf are graduating, Morris has the chance to slide into a starting lineup that includes AP All-American Honorable Mention Lindsey Pulliam and defending Big Ten Defensive Player of the Year Veronica Burton.

But Morris knows she has a lot to learn before she steps onto the floor of Welsh-Ryan Arena.

“College basketball is so different from anything that I’ve ever done before,” Morris said. “What I can control and becoming the best version of myself for the team is my philosophy.”

To say it plainly, Morris comes from an athletic family.

Her father Jeff, who stands at 6-foot-6, attempted to walk onto the basketball team at Seton Hall University, where her mother Shannon was the swim team captain. Anna’s older sister Julia is a setter for the University of Delaware’s volleyball team.

“Ever since our crew was born, all of them have kind of taken into the athletic stuff,” Jeff said. “It’s become something we really loved.”

Morris’ basketball career began in first grade at a local recreational program. She was much taller than her fellow 6- and 7-year-olds, so Jeff moved her up to the third- and fourth-grade league. He always had his daughter guard the opposing team’s best player.

Morris eventually followed in her sister’s footsteps and began playing volleyball. She found that her height was a great asset on the volleyball court. As she blocked opponents’ shots and coordinated scoring opportunities, Morris fell in love with the sport and forwent middle school basketball to dedicate as much time as possible to volleyball.

But soon Morris realized that she missed playing on the hardwood. So she joined the New Jersey Freedom, an Amateur Athletic Union team, and began to divide her athletic priorities between the sport her father taught her and the sport her sister introduced to her.

By the beginning of her junior year, Morris had won back-to-back state championships with IHA’s volleyball team.

But it was her performances on the basketball court that caused college programs to take notice.

She won the 2016 Boo Williams Nike National Tournament with the Freedom, and with the Blue Eagles, she nearly doubled her scoring average from freshman to sophomore year.

She received her first offer from Fordham University during her freshman year.

“I was kind of oblivious to the whole thing because I was 14 years old,” Morris said. “As I played more and I got more exposure, more schools came into play.”

With her likelihood of playing college basketball growing, Morris’ new normal became six days of practice per week with the Blue Eagles during the winter, along with three practices per week and weekend tournaments for the Freedom in the AAU season.

“I decided that I wanted to focus all my effort into recruiting for college and building my skills for basketball,” Morris said. “The spring and summer were really big for recruiting in freshman, sophomore and junior year. I was definitely playing a lot.”

When Northwestern first offered Morris, she was unfamiliar with the university. Not only was NU fairly far away from her home, but also she didn’t know of many people who attended the Big Ten’s sole private institution.

So Morris didn’t give it too much thought when IHA coach Steve Silver told Morris the Cats were interested in her. NU contacted Morris during junior year, fairly late in the recruiting process. By this time, Morris had already received nearly 30 offers, ranging from small schools like Columbia University to large state institutions such as Virginia Tech.

Silver finally convinced Morris to meet with coach Joe McKeown and his staff in late November.

On her first visit, she saw the Cats’ opening matchup at the newly-renovated Welsh-Ryan Arena, an upset win over No. 21 Duke. At the game, she sat near Jasmine McWilliams, a three-star shooting guard who would eventually become another member of the Cats’ 2020 recruiting class.

Morris, harboring an interest in Evanston’s college-town vibe and McKeown’s program, returned to the Chicago suburb a couple of months later.

Morris, citing the combination of elite academics and Big Ten competition, realized she wanted to become a Wildcat. Her interactions with future teammates sealed the deal and she committed in March 2019.

“They seemed like a really close group, which isn’t something that you always get when you visit a lot of schools,” Morris said. “The girls were very welcoming and… very, very fun to be around. They seemed to have good relationships with all the coaches. In the locker room, it was always good energy and just positive things.”

The graduations of Scheid, Wolf and two other senior forwards leave a huge dent in NU’s frontcourt. This past season, Scheid and Wolf were the Cats’ third- and fourth-best scorers and Wolf was the team’s top rebounder. Currently, rising junior Courtney Shaw is the only forward or center on the Cats’ roster for next season.

To repeat as Big Ten champions, NU needs a dangerous dual-threat like Morris, who averaged 14 points and 9.5 rebounds during her senior season.

On offense, Morris has the height and physicality to be a dangerous post option for pick-and-rolls, layups and short jump shots. Morris fixed her shot form by relying less on her left hand as a guide and said she has gained confidence from the field and the free-throw line.

Defensively, Morris is a powerful rebounder, using her size and agility to make stops all over the court. In a December 2019 game against Secaucus High School, she grabbed 16 rebounds, blocked three shots and added a steal.

“The thing that she does on the court (of) defensively blocking shots, changing shots and clogging up the middle rebounding outlet (was) where she grew her game,” Silver said. “She really met all of my highest expectations.”

NU and Morris both experienced heartbreak this season. The Cats didn’t get to play in the NCAA Tournament — where they were projected to be a top-four seed — after their best season in program history, while Morris couldn’t participate in her final chance at a state championship.

But both NU and Morris know how to succeed. The Cats set a program record with 26 wins, while Morris led IHA’s basketball team to four straight sectional titles. She won two state championships in volleyball during her junior and senior years and was named the Gatorade New Jersey Volleyball Player of the Year for 2018-19 and 2019-2020.

Players like Morris can help propel NU back to the peak of the Big Ten. By coupling her with an offensive star like Pulliam and a dual-threat maestro like Burton, more trophies may be on the horizon.

“It’s a tough act to follow,” Morris said. “Having that successful of a year. I think it’s really cool to have such a great group of girls… that know how to win, so I’m excited to come in and be a part of this team.”