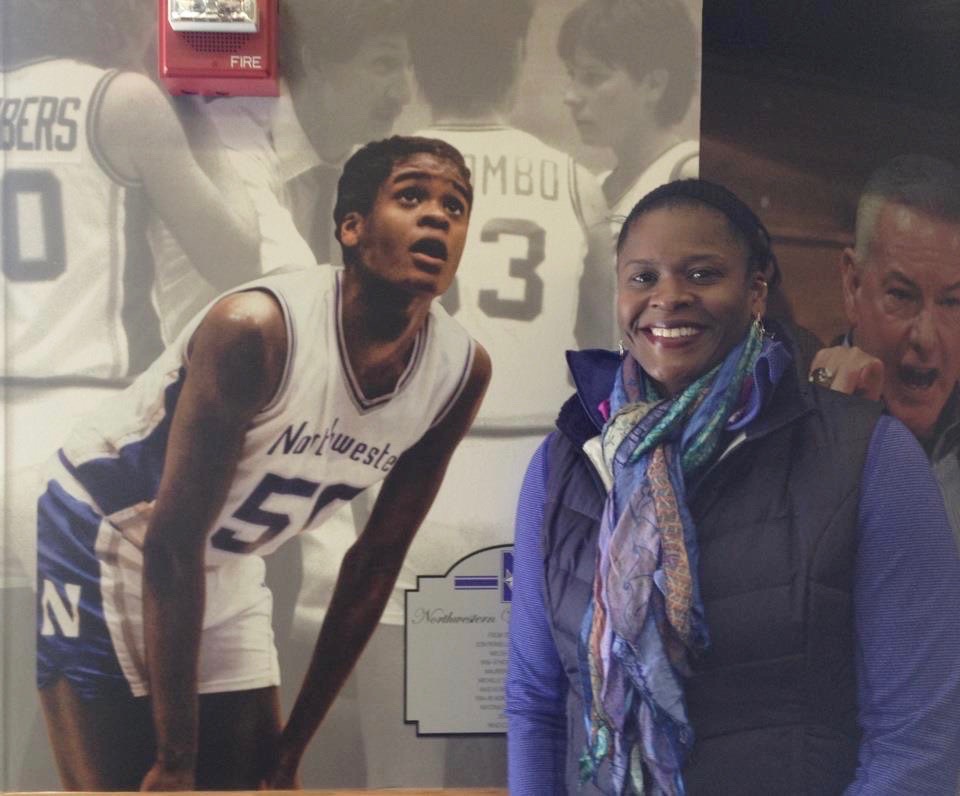 Anucha Browne stands in front of an image of herself. Browne will go down as one of the best basketball players in Northwestern history. (Source: Anucha Browne)

Anucha Browne stands in front of an image of herself. Browne will go down as one of the best basketball players in Northwestern history.

As a leader on and off the court, Anucha Browne has never been afraid to speak her truth

Anucha Browne is arguably the greatest basketball player in Northwestern history — and she has the stats to back it up.

Strictly from a scoring perspective, there is no comparison. Browne holds the Wildcats’ women’s basketball record for points in a game (45), scoring average in a season (30.5) and points for a career (2,307). She also ranks in the top 10 in field goal percentage, free throws made, rebounds, steals and blocks.

As a high schooler, Browne had established herself as one of New York’s premier girls’ basketball players. She began receiving offers from several prestigious universities — Duke, Brown and Holy Cross among them.

But women’s basketball coach Annette Lynch and her staff hadn’t followed suit. Having heard nothing from the Cats, Browne made sure the coaches knew who she was when she visited campus to see her older sister Vicki.

“For some reason, I wasn’t on Northwestern’s radar at the time,” Browne said. “I went to visit my sister and I said to the coaches, ‘Hey, I’d love to come in and talk to you guys.’”

But Browne didn’t say much, instead letting her play become the driving force for Northwestern’s attention. A few pickup games later and Browne had quickly jumped onto the Cats’ radar before eventually committing to NU.

“Not only did she fall in love with the campus, spending her spring break with me and my friends… but Northwestern’s athletic department fell in love with her,” her sister Vicki Browne-Moore said. “Before she even got home, she was like, ‘This where I want to go.’”

Earning a scholarship to play for the Cats exemplifies Browne’s life — advocating for herself and others when some might not have seen her vision.

Regardless of the challenges she has faced throughout her professional career, Browne celebrates the fact that, looking back on her career, she was unwavering in standing up for what she believed was right.

“When I think about my journey, even in my career… with any challenge I was met with, I was able to take a stand for myself and it was grounded in what was right,” Browne said. “I truly believe that when you get to a place when you’re willing to stand up for what’s right, even if you’re alone, you’ve arrived.”

The voice and the fortitude that defined Browne’s professional life started during her four years in Evanston. While on campus, Browne was surrounded on and off the court by powerful women who showed her the way, helping her find her strength as a woman of color.

“I’ve talked to women all over the world and many of them never reach a place in their life where they are 150 percent comfortable in their own skin,” Browne said. “I was fortunate to have gotten there much sooner in life.”

As the intense lifestyle of a college student-athlete picked up, Browne found support around campus as a freshman. Off the court, she credits her academic adviser Cynthia Patterson with building her confidence in the classroom, though Patterson said Browne’s dedication to improving her studying made the difference.

“She had a great sense of herself and she developed it over her time and began to embrace it,” Patterson said. “Sometimes student-athletes don’t always have the same confidence in their academic capabilities as they do in their athletic (capabilities)… From the first time she walked into my office to the time she left, she had the confidence in the ability and capability she already had.”

Browne began to display the leadership qualities she possesses today, as she led by example on the court. She remembered meeting powerful women like Dee Todd, the first black coach in Northwestern history in any sport. It was women like her sister, her mentors on the team, Patterson and Todd who Browne said changed her life.

The love for the game

Browne was born and raised in Brooklyn, New York — as was her love for the game of basketball.

It was on the courts that Browne gravitated to basketball and started developing her skills. By the time she was in high school, she had developed into a real talent. And at the inaugural Empire State Games as a high school freshman in 1978, Browne realized how good she was, shining against some of the best in the state and feeling “elite” for the first time.

Browne averaged 11.9 points and 6.0 rebounds per game in her freshman season at NU. Each offseason, she found a way to take her game to the next level. In her next two seasons, she increased her scoring and rebounding, averaging 20.4 points and 9.2 rebounds as a sophomore and 21.3 points and 10.4 rebounds per game as a junior.

However, one of the first failures she experienced on the court came after her junior season. The 1984 Olympics were right around the corner and Browne was in the running for a roster spot. While she had trained hard all year for a chance to represent the United States in Los Angeles, she didn’t make the final cuts.

However, it did make Browne motivated — so she trained in a way she hadn’t before.

“I decided that I would back off… I was almost kind of just giving it a pause,” Browne said. “It was like a summer of reflection I would say. I did less playing and more running.”

Instead of forcing herself to take a certain amount of shots per day or go to summer basketball camps, Browne tried cardio-based training and reflected on her future, culminating in Browne showing up for her senior season in the best physical shape of her career.

The results of her off-season training resulted in a season like no other. As a senior, Browne led the country in scoring, averaging 30.5 points per game and becoming Northwestern’s first All-American selection. When her career was all said and done, Browne held 24 Northwestern records and she was named Northwestern women’s basketball player of the decade in 1992.

Holding her own in the corporate world

When Browne’s basketball career was over, she wanted to get into the radio and television business, so she went to Florida State University to get a Master’s Degree in Marketing and Communications.

But, after grad school, she took a job with Eastman Kodak before moving on to IBM. Though she wasn’t working in sports, Browne said IBM taught her what she believes is one of the most valuable lessons in business: listening to your customer.

“That translates to everything you do as a leader,” Browne said. “Listen to your staff. Listen to what folks were saying. It taught me how to manage up, how to manage down and manage across.”

As she learned how to manage a business, she said she was fortunate to have co-workers who listened to her as well. John Blasig, Browne’s mentor, sat her down and helped her set a career plan that would allow her to get into sports. IBM sponsored and provided the enabling technology for the Olympic Games, the NBA, the PGA and a number of tennis events. Through those partnerships, Browne was able to work at three Olympic Games and eventually land a job with the Knicks, whom IBM sponsored.

Despite her success within the Knicks’ organization, Browne was fired in 2006 in retaliation to sexual harassment complaints she made. Soon after, she filed a sexual harassment and retaliation lawsuit against then-general manager Isiah Thomas. Browne embraces the challenges she faced because she did what she has done all her life — fought for what was right.

“I own that and celebrate that because that’s part of who I am,” Browne said. “I’m proud of these moments, because they’re meaningful, not just for me, but for people who came after me.”

Patterson said she knew Browne wouldn’t take a stand unless she believed it to be absolutely necessary. And after nearly a two-year battle with Thomas and the Knicks, Browne won the case in 2007, and the jury ordered that she was entitled to $11.6 million from Madison Square Garden and Knicks owner James Dolan.

“She stood up not only for herself, but for women in the workplace,” Manuel said. “That is indicative that she didn’t go through all of that just for her…she fought in there because it was bigger than her.”

Making an impact outside of the sports world

Despite her love for sports, Browne is now moving down a different career path, but following the same theme of giving back and standing up for others.

Before taking a job with UNICEF in 2017, she held one more job in sports — the Vice President of Women’s Basketball Championships with the NCAA. The job entailed overseeing Division I, II and III championships, and it was there that her love for social advocacy and sports came together.

During her five years in the role, Browne helped put on events in cities, but also focused on leaving a legacy in the championship towns they visited.

Browne took the time to visit the least-served populations in the host cities, setting up programs to improve the schools or parks in those areas. It was through these efforts that Browne began to feel drawn to advocacy work.

“It was the power of sports, but it was about the power of sports to affect social change,” Browne said. “That, for me, was the connection… it was what bridged me into more of a direct tie to wanting to do service to others in a more substantive way.”

Browne currently serves as the chief engagement, advocacy and global programs officer at UNICEF to develop a pipeline of volunteers and supporters of the organization in 190 countries.

During her career, she has created a track record of working with organizations on missions that have allowed her to fight for others. And Browne’s job is perfectly in line with the core beliefs that have guided her throughout her life.

Her passion and desire for advocacy and justice has continued to expand — from her youth in Brooklyn, to her days in Evanston, to her current impact across the world. And it’s an opportunity that Browne doesn’t take for granted.

“If you don’t use your voice, it’s almost a disservice or it’s like that privilege was wasted on you,” Ruth Browne said. “Her ability to stand up for herself and to stand up for others is really what drives her because she comes from a place where she feels like being able to have a voice is truly a privilege.”