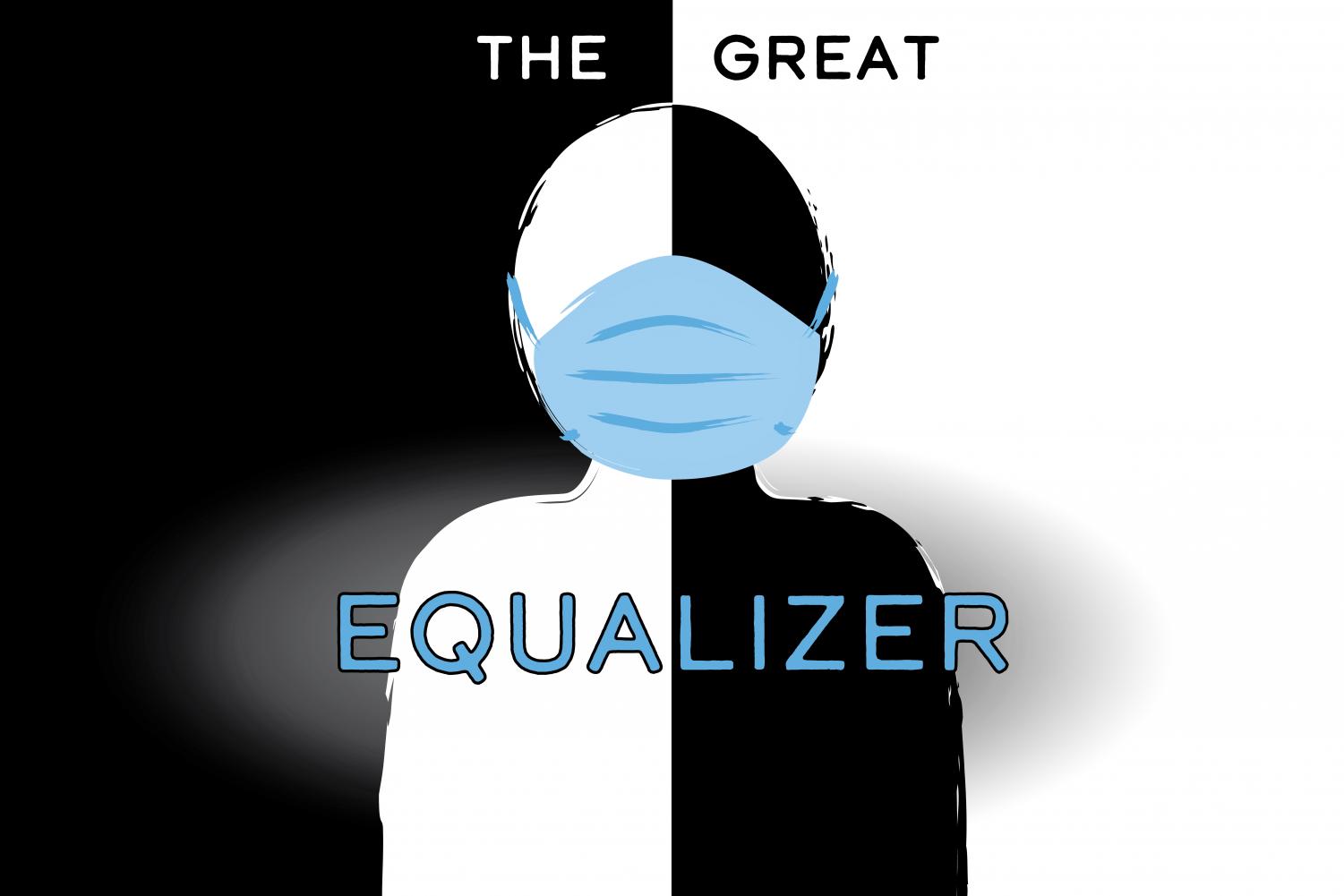 The novel coronavirus has upended life as many Americans know it. Spreading across the country like wildfire, it has affected nearly every state and territory, leading some to call the virus the “great equalizer.”

However, new data have proven this is far from accurate. One disparity, among many, has become apparent: in Illinois, like other states, African Americans are disproportionately more likely to contract and die from COVID-19.

When cities and states started reporting their numbers in earnest around mid-March, the data sets were simple. They named confirmed cases, and soon after, deaths. Beginning at the end of last month, some cities and states — Illinois among them — began releasing demographic information like race, age and gender on their coronavirus sites.

Before individual regions around America chose to report this information, the Centers for Disease Control and Prevention had been releasing continuous location and age data, but added nothing about race or other social identifiers. Members of Congress, including Sen. Elizabeth Warren (D-Mass.) and Rep. Ayanna Pressley (D-Mass.), have since called out the lack of nationwide race data, but those statistics remain unavailable.

COVID-19 deaths have also been racially disproportionate in the state — 43.5 percent of deaths have been black residents. The first documented death from the disease in Illinois was a 61-year-old black woman named Patricia Frieson.

Ald. Robin Rue Simmons (5th) said her concerns with a lack of data about social identifiers like race and age started before the national push for comprehensive statistics. She said she wanted the data to determine the best methods for community outreach and healthcare.

“I had concerns that we would have higher impact in the black community because of the notice that residents with underlying health conditions would be more susceptible to the disease,” Rue Simmons said. “But once the national trend was published, I followed up on their requests.”

Evanston’s basic COVID-19 data collection goes as far back as March 14. Their page features the number of confirmed cases and deaths, updated daily. Statistics like age, race or other demographic information will not be available for now, according to city officials.

According to the IDPH coronavirus website, reported cases in the city are consistent with state-wide trends. As of Friday evening, 47 black residents have contracted the novel coronavirus in Evanston, compared to 46 white residents and 16 Hispanic residents. Nine cases were “left blank” and 20 were marked “other.”

Racism in American medicine has been well documented for hundreds of years, exacerbated by complications like unequal access to healthcare and general distrust in the medical system amongst communities of color.

Within the context of coronavirus specifically, people who think they have the disease who might call their primary care physician to see if they’re experiencing symptoms, said sociology and African American studies Prof. Celeste Watkins-Hayes. They may even be able to check in with their doctor every day.

Additionally, she said people of color are overrepresented in essential industries exempt from the “shelter in place” rulings, which puts them at higher risk as they head to their jobs every day. Those who work in grocery stores, clean facilities like hospitals or deliver groceries, for example, often interact with dozens of outside individuals a day performing necessary tasks.

While there is no biological reason one race would contract coronavirus over another, black communities are affected by factors like lower income levels, living near environmental hazards and higher rates of underlying conditions like diabetes and hypertension — all stemming from structural racism. This means African Americans are particularly vulnerable to large-scale viruses such as COVID-19. Watkins-Hayes calls it an “injury of inequality.”

Rue Simmons said among Evanston’s black population, similar problems are evident. Limited access to adequate health care, healthy foods and protective equipment are some of the many barriers, she said. Combined with low-wage jobs and less opportunity to shelter in place, the alderman said she’s concerned longstanding inequities mean more black Evanston residents will test positive for the disease.

For some, the unequal effects the novel coronavirus has had on black Americans have mirrored another public health crisis: the HIV/AIDS epidemic of the 1980s and 90s.

The de facto coronavirus spokesperson and director of the National Institute of Allergy and Infectious Diseases, Anthony Fauci, said he has seen similarities between the structural healthcare barriers LGBTQ communities encountered during the HIV/AIDS outbreak and black communities facing coronavirus today. He said a great part of his career has been “defined” by that epidemic.

“Health disparities have always existed for the African American community,” Fauci remarked during a Tuesday press conference. “But here again, with the crisis, how it’s shining a bright light on how unacceptable that is.”

Part of Watkins-Hayes’ research includes looking at the HIV/AIDS and the way it has affected American life, and she said there are some similarities between the two outbreaks. There is a current “race against the clock” sentiment that has produced a lot of anxiety around the world, she said. While the HIV/AIDS epidemic was marked by public activism, some of which is not possible today due to social distancing guidelines, she said many doctors have taken up that role on social media for COVID-19.

However, Watkins-Hayes said one key difference is the lack of an immediate push for racial statistics during the HIV/AIDS outbreak within the national conversation. The first documented cases in the United States were five gay, white men, she said, a demographic that subsequently took political ownership of the disease through quick and well-resourced mobilization. A national narrative emerged, Watkins-Hayes said — one that seemed to erase the experiences of black and brown gay people.

“It’s a slightly different national conversation now because, number one, we’re paying more attention to racial health statistics, and (are) willing to engage those,” she added. “Secondly, it wasn’t the case that all of the initial cases (of coronavirus) were only white people.”

“Take your breath away”: The Chicago factor

Though initial observations show that doctors may be less likely to advocate for testing for their black patients, Rue Simmons said she hasn’t seen a difference based on race.

“Black residents that have needed testing have been able to access it at the testing sites in Evanston,” Rue Simmons said. “That’s more than I can say for my friends that live in Chicago that have not been able to easily get testing, even when they have symptoms for coronavirus.”

In Evanston, residents can visit AMITA Health Saint Francis Hospital or NorthShore’s Evanston Hospital to get more information about their potential symptoms, institutions that issue hundreds of tests a day. But starting a few miles south of Evanston, many Chicagoans face a different atmosphere when it comes to testing availability — sites are concentrated on the North Side, which is historically wealthier and whiter.

In Chicago, COVID-19 deaths have been concentrated below the Loop as well, with the highest numbers in neighborhoods like Auburn Gresham, South Shore and Chatham, which are predominantly black and less wealthy. Across neighborhoods, the number of deaths on the South and West Sides outnumber those on the North Side. In Cook County, black residents make up 58 percent of COVID-19 deaths despite comprising 23 percent of the population, according to a WBEZ analysis. The majority of those who died had underlying health conditions.

During a Monday press conference, Chicago Mayor Lori Lightfoot said these statistics “take your breath away.” Lightfoot, who has garnered national attention for her city’s aggressive response to the virus, has pledged to take the effects coronavirus has had on black and brown residents more seriously. The city has ordered healthcare providers to fully comply with requests for complete data and established task forces that include local activists, in addition to other measures to slow the spread of COVID-19.

A hold on public data

Greg Olsen, the city’s public health manager, said he thinks Evanston currently has enough cases to start drawing conclusions. But because data from the IDPH and hospitals are incomplete so far, he said it’s hard to make any “sweeping comments” at this point. In addition, Olsen said reporting racial data in Evanston is different from reporting the same statistics in a large city like Chicago.

“Their population is so large that they’re able to share certain demographics because the chance of identifying an individual is so small,” Olsen said. “But, since Evanston’s population is significantly less than Chicago, we have to be mindful of what we’re putting out in the public because we don’t want to inadvertently, somehow, release any sort of identifiable information.”

To maintain resident privacy, Olsen said he is working with the IDPH and the director of the Health and Human Services Department to determine what information can be shared. Ike Ogbo, the city’s health director, and IDPH representatives did not respond to multiple requests for comment.

Mayor Steve Hagerty said he is aware of a discrepancy between white residents and residents of color contracting COVID-19, but added that the IDPH has comprehensive information he can’t access yet. He said he is still waiting to hear how many people have gotten tested in Evanston so far.

“The priorities right now (at) Illinois Public Health — properly so — (are) elsewhere,” Hagerty said. “Not, like, ‘Let’s analyze all the data.’ I’m sure they’ll get to that, but they have more pressing needs right now. Once we have it, I would absolutely think that we would share that information.”

However, some think the information should be made available as soon as possible to aid existing community and city leadership efforts. Rue Simmons said the racial disparities in COVID-19 contraction should have been anticipated by the city, given the “well-known” data about underlying health conditions among black residents.

A key figure in securing reparations funding for African-American residents, Rue Simmons said the next challenge will be overcoming the upcoming financial damages to the black community, a group still recovering from wealth loss related to the 2008 recession.

— ‘A dark cloud’: Evanston leaders concerned with disproportionate rates of coronavirus among black and Latino residents