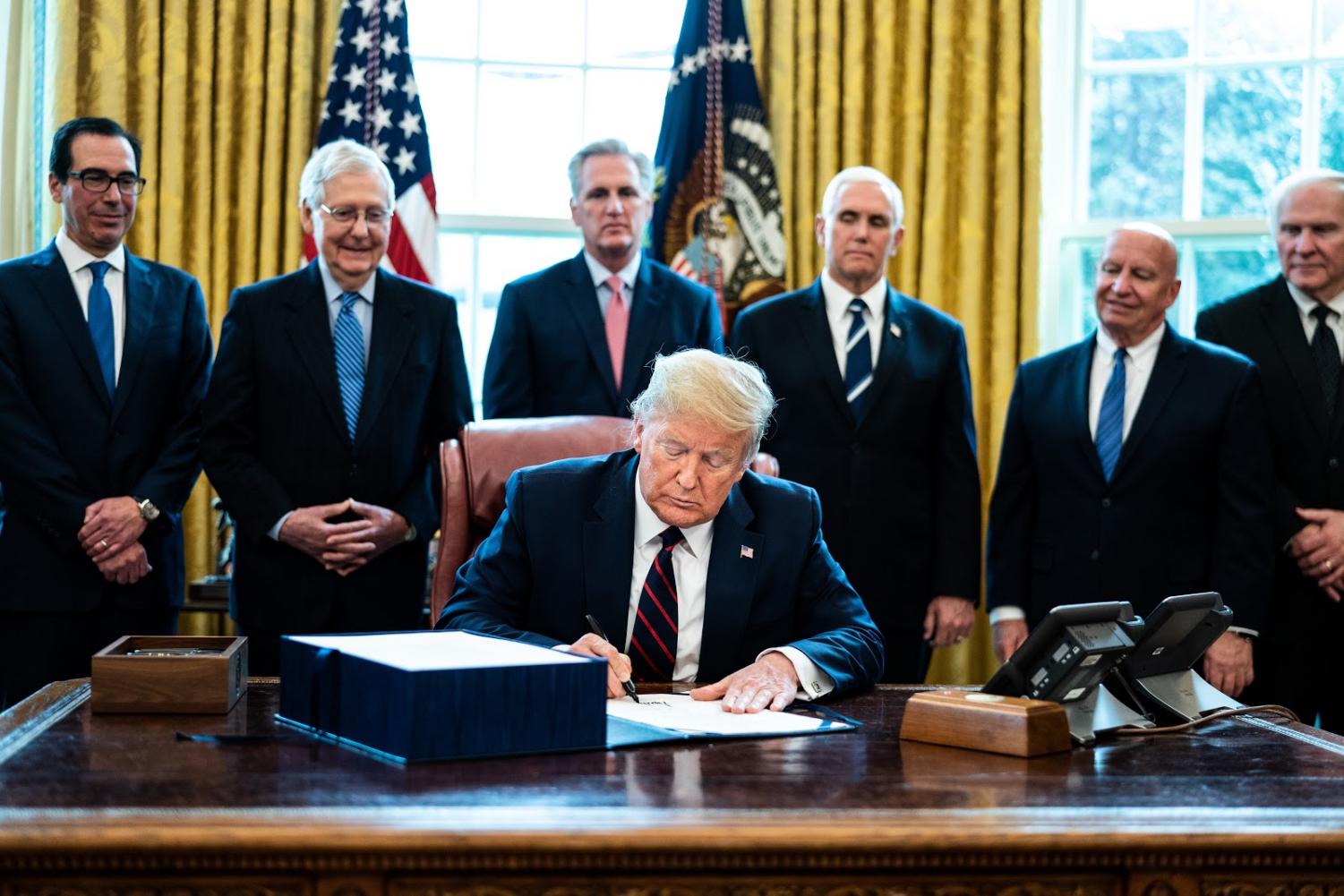 U.S. President Donald Trump signs H.R. 748, the CARES Act in the Oval Office of the White House on March 27, 2020 in Washington, D.C. Earlier that day, the U.S. House of Representatives approved the $2 trillion stimulus bill that lawmakers hope will battle the economic effects of the COVID-19 pandemic. (Erin Schaff/Pool/Getty Images/TNS)

U.S. President Donald Trump signs H.R. 748, the CARES Act in the Oval Office of the White House on March 27, 2020 in Washington, D.C. Earlier that day, the U.S. House of Representatives approved the $2 trillion stimulus bill that lawmakers hope will battle the economic effects of the COVID-19 pandemic.

Millions of college students left out of coronavirus stimulus payments

With most college students being claimed as tax dependents, they will be ineligible for a $1,200 check from the government — despite facing similar financial circumstances to those the law is targeting.

As Northwestern transitions to remote learning and opportunities to earn income shrink due to the spread of COVID-19, students’ challenges — such as access to quality Wi-Fi and paying Evanston rent — have been exacerbated.

In an attempt to combat the economic ramifications the virus has inflicted on the country, President Donald Trump signed an unprecedently large stimulus bill on March 27 authorizing, among other things, direct payments to up to 145 million eligible American adults. The vast majority of college students, though, will not be the beneficiaries.

The bill, which originated in the Republican-held U.S. Senate, allocated $2 trillion toward supporting the national economy, with hundreds of billions of dollars earmarked for a corporate liquidity fund and grants to small businesses.

It also includes a one-time $1,200 payment to American adults who reported earning less than $75,000 in their 2019 tax filings, with smaller amounts going towards those who earned less than $90,000. No money will be given to anyone above that threshold, but the amounts will be doubled for married couples filing jointly. Parents of children under age 17 will receive a $500 credit per child.

But college students who are older than 17 and still claimed as a dependent by their parents, including any students whose parents pay for over half of their expenses, have been entirely left out of the bill, known as the CARES Act.

Most college students’ tax status as dependents bars them from receiving the check despite facing the same unemployment and dwindling incomes as the targets of the law. The similarity has not gone unnoticed, as Northwestern students and others have expressed frustrations with their exclusion.

“So if college kids get claimed by their parents as a dependent they aren’t eligible for the $1,200 stimulus package and since they aren’t under (17) they don’t get the $500 child credit either, not to mention most college kids are jobless right now,” Twitter user @brandonmorgs wrote in a tweet that received over 204,000 favorites. “How is this ok?

The Tax Policy Center estimates 21 million Americans not classified as children are claimed as dependents, meaning they will not receive any money from the government, nor will their parents or caretakers receive any compensation on their behalf.

Economics Prof. Matt Notowidigdo said lawmakers’ exclusion of tax dependents mirrored past stimulus bills that authorized tax rebate checks during recessions, including the 2008 recession. Notowidigdo said in typical recessions, college students still attended school and had opportunities to earn income on campus, so they were not a prime target for government financial assistance and were thus excluded.

However, he said the circumstances of this coronavirus-induced recession are different, because students are not on campus and the majority of on-campus and off-campus jobs, such as working at local businesses in Evanston, are no longer available.

“A lot of college students probably should have been thought of as people who would deserve the stimulus checks by virtue of the fact that they’re not able to have the same income opportunities, because all the schools have been closed down,” Notowidigdo said.

Michael Zona, the spokesman for the Senate Finance Committee, which wrote the bill, told The Wall Street Journal that tax dependents were excluded because they are, by definition, not responsible for the majority of their financial support. Recovery rebates, he said, are intended to help those who are financially responsible for themselves and others.

But for Weinberg junior Jihad Esmail, that argument doesn’t hold much weight. While his parents financially support him, he still has expenses he pays for with his own income — one he’s no longer earning after the cancelation of his job. His younger brother, a senior in high school who worked in an ice cream shop, has also lost his job, and his mother’s employer no longer offers opportunities to work full hours.

While their combined three incomes are not a majority of his family’s earnings, they still constitute a “significant” amount no longer coming in, Esmail said. But as tax dependents who are not children, he and his brother will not receive $1,200 tax rebates from the federal government, and his parents won’t receive $500 for them either.

That money could have made a difference, he said.

“We could have used this time to make sure we’re caught up on bills, or make sure we pay off some debt,” Esmail said. “Or in my situation, am I going to be able to pay the rent that I promised my landlord to pay if he decides he’s not going to freeze our rent back in Evanston? Because my income was used to pay for that.”

Who is a dependent?

Esmail, who has been vocal with his frustrations on Twitter, said a common criticism he’s received is that his parents should not have claimed him as a dependent. But because he, like most other college students, still receives meaningful financial support from his parents, they claim him on taxes, even though he earns income.

Full-time students can be claimed as tax dependents by their parents up to age 24, and are commonly claimed because most parents pay for over half of their students’ tuition, among other expenses. Additionally, claiming dependents can make parents eligible to earn tax credits. While filing as an independent head of household could be beneficial to a college student, the complexity of doing so makes it uncommon. Besides, Esmail and his family had already filed their taxes by the time he learned being claimed as a dependent made him ineligible for a stimulus check.

Esmail said many students would have filed their taxes differently if they had known their dependent status would affect a potential rebate. He knows there are students at Northwestern who are financially independent from their parents that will earn the check, as well as students whose parents pay for everything and do not need it.

But there are enough students in the middle who receive enough money from their parents to qualify as dependents but still have expenses to justify including them in the bill, he said.

“It just puts people in a really difficult situation,” he said. “(Some would) say, ’Maybe I didn’t need this money, but I would have really appreciated it.’ And then other students would say ‘No, I actually, really, really needed this money — it just makes financial sense for my family to claim me as a dependent on taxes.’”

What did and didn’t make the final bill

Rep. Jan Schakowsky (D-Evanston) said there were many provisions like broadband extension that she would’ve liked to see included in the relief package, and that House Democrats are working to secure those provisions in the next bill.

“We certainly do want to do more for students,” Schakowsky told The Daily.

She emphasized the temporary student loan relief included in the law, which defers all loan and interest payments backed by the federal government through Sep. 30.

This applies to about 95 percent of student loans, as the rest are provided through private financiers. A March 24 letter signed by Schakowsky, along with 60 other members of Congress, urged student loan servicers to match measures announced by the U.S. Department of Education that would provide relief for all borrowers. Those measures include setting loan interest rates to zero percent for at least 60 days and giving borrowers the option to suspend payments for at least two months.

Schakowsky highlighted the $14 billion provided in the package for direct aid to colleges and universities, half of which she said must serve as emergency aid for students, as student-facing aid, but she acknowledged the strain that could be caused by excluding tax dependents from the $1,200 stimulus checks.

“The CARES Act doesn’t provide that support,” she said, acknowledging that “is a real burden on your family, too.”

Notowidigdo said from an economist’s perspective, college students’ economic position and habits make them logical candidates to have received the tax rebate.

Stimulus payments are intended to target Americans who are both suffering financially and are likely to spend the money they’ve been given and thereby inject life into the economy, Notowidigdo said. If they had received the check, Notowidigdo said he assumes college students would spend it relatively quickly rather than putting it into a savings account — exactly what the CARES Act intends to achieve.

“It makes the college students particularly good people to target because they’re going to be spending a lot of it right away,” he said. “And that’s really the goal of this policy.”

While Congress works to include more provisions for students in future bills, Esmail said the exclusion of most college students in the tax rebate creates financial stress.

“For a lot of students, it would’ve been really, really beneficial,” Esmail said, “and a huge relief.”