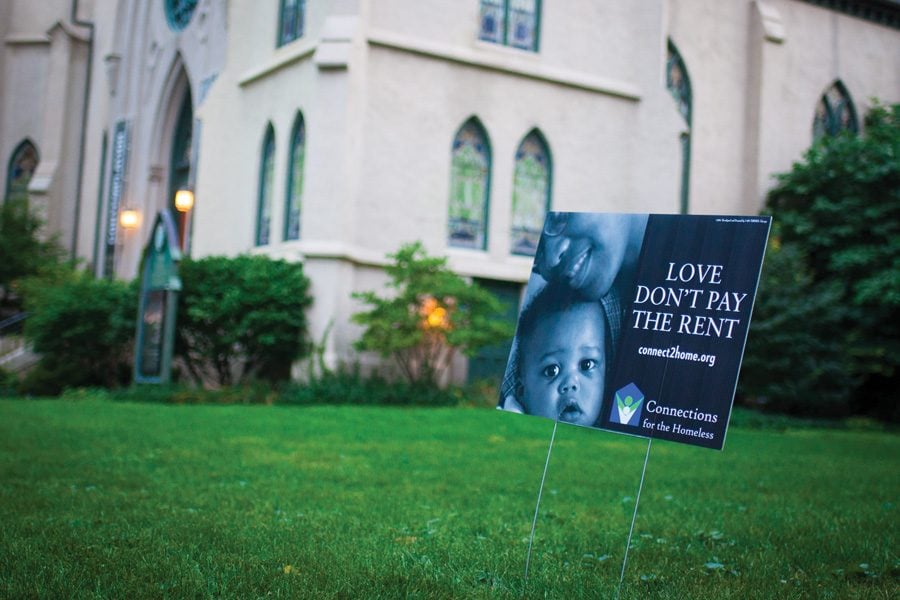 A yard sign from Connections for the Homeless. Connections hosted a virtual event Tuesday honoring their participants, volunteers and staff. (Daily file photo by Daniel Tian)

A yard sign from Connections for the Homeless. Connections hosted a virtual event Tuesday honoring their participants, volunteers and staff.

As Illinois residents shelter in place and businesses close their doors, the city’s homeless population is left particularly vulnerable to the threat of COVID-19. In response, some Evanston organizations have restructured their traditional methods of support.

While Gov. J.B. Pritzker’s order exempted those experiencing homelessness from sheltering in place, a lack of reliable housing compounds issues associated with an increased susceptibility to the virus.

Those experiencing homelessness tend to have higher rates of health conditions that put them at risk for complications while infected with COVID-19, said Martena Reed, a research associate at the Urban Institute.

Health issues are not the only problems those experiencing homelessness face that make coronavirus a particular concern.

“In shelters, people may be living in close quarters; it prevents their ability to social distance,” Reed said. “That would make them more vulnerable to spreading coronavirus or to contract it from someone who has it.”

In Evanston, however, the rapidly evolving crisis has led to shelter closures and other challenges for organizations providing aid to the city’s homeless population. Interfaith Action of Evanston’s winter emergency shelter closed a week early to protect its residents from the spread of coronavirus. At the time, too many men inhabited the space to practice safe social distancing — 35 individuals were in one room, executive director Sue Murphy said.

At a March 19 Q&A about coronavirus, Mayor Steve Hagerty said closing the shelter was the best decision to maintain the safety of everyone involved. He also said he was concerned about the lack of self-isolating situations for homeless community members.

Coronavirus concerns extend beyond those living on the streets, too, Hagerty said. Evanston residents are at risk of contracting the virus if they have no reasonable way to self-isolate. Hagerty mentioned five people sharing just one bathroom in a small apartment as an example.

“Housing is the biggest and most complex and most challenging issue,” Hagerty said. “It’s going to be even more challenging, because you’ll have patients that you’re self-isolating — that we have to help self-isolate — who have a health issue, but it’s not requiring them to go to the hospital.”

Hagerty offered potential housing solutions to look into as the crisis evolves, from empty apartments to unoccupied residential halls.

Rabbi Andrea London of Beth Emet Synagogue said in a March 18 interview with The Daily the situation was escalating quickly. One moment, soup kitchen volunteers were taking precautions but continuing to distribute meals. Within a week, the groups heard they couldn’t enter the kitchens and they needed to serve lunches and dinners outside the building.

“Having shelter is the big issue,” London said. “I don’t know how we can do that. We can’t bring more people into our buildings. Even if you have a shelter, you need people supervising the shelter, people who are supervising people, and that’s putting more people at risk. We don’t really have the capacity to do that. We’re not a hospital.”

So clergy members and the community started looking for solutions.

Chicagoland organization Connections for the Homeless has taken action to provide housing assistance. Jennifer Kouba, the associate director of development, said the organization partnered with Lake Street Church of Evanston to open a 24/7 emergency shelter for around 20 people.

The organization is also keeping Hilda’s Place, a transitional shelter, open 24/7 so its residents don’t have to exit the building and can shelter in place.

Connections for the Homeless is still providing drop-in assistance at its administrative building but is limiting staff and the amount of visitors allowed in at a time. The number of visitors Connections can see a day has dropped from 100 to about 45-60, Kouba said.

The group has been able to maintain proper safety protocols and ensures everyone washes their hands and high-touch areas are frequently cleaned.

“Right now, our staff is working around the clock,” Kouba said. “It’s been a really wild pace, but we’ve also been getting increased support from volunteers.”

At the hospitality center, the organization found a larger room within the church, spaced all chairs at least six feet apart and set up a hand sanitizer station at the point of entry, Murphy said.

One Interfaith Action volunteer stands at the door greeting individuals, and another volunteer sits at the kitchen door, far away from visitors. Only one guest is permitted to approach the food table at a time, and guests no longer need to sign out when they leave, Murphy said.

At the soup kitchens, which operate daily from different faith-based locations in Evanston, Murphy said some individuals now receive takeout meals at the door instead of entering the buildings. Afterwards, other individuals receive meals that volunteers deliver. Additionally, rather than preparing meals inside the kitchens, Interfaith Action currently purchases most takeout meals from local restaurants at generous discounts.

Over the last few months, Murphy said the hospitality center saw 35-40 individuals regularly. In the past week, 25-30 guests stayed at the center each day.

Murphy attributes the decline to community members experiencing homelessness taking shelter with parents and siblings, or finding other places to stay in Chicago.

The city has also stepped in to help with the situation, installing portable toilets and handwashing stations throughout the city, including at the Lorraine H. Morton Civic Center and Levy Senior Center.

Hotel rooms and additional housing as a solution

Currently, Connections for the Homeless and YWCA Evanston/North Shore are placing people experiencing homelessness in local hotel rooms. Murphy said at the Interfaith Action hospitality center, she met one woman who would later use a local hotel room as shelter.

“I called her aside and said, ‘I want you to know that, you know, we have a place for you to go at night,’” Murphy said. “And she started to cry. And I said, ‘Where have you been staying?’ And she said, ‘I just ride the train all night.’ She’s all alone. So it’s sad, but it’s happy. She is now in a safe place.”

As of Wednesday evening, 11 people have moved into such housing, according to Kouba. The capacity for placing people in hotel rooms is currently at 40. Connections for the Homeless is also partnering with places like Curt’s Cafe to make sure residents staying in the organization’s provided housing are fed.

Evanston Community Foundation provided funds to secure the hotel shelters that Connections for the Homeless and YWCA Evanston/North Shore coordinated. ECF, which provides grants for nonprofits across Evanston, has set up the Evanston Community Rapid Response Fund to help groups responding to the impact of COVID-19.

“Everything has become more of an emergency,” said Monique Jones, ECF’s President and CEO. “When it comes to our most vulnerable populations, we have to move faster than ever to address their needs.”

Additionally, Ald. Robin Rue Simmons (5th) has volunteered her Asbury Avenue property to shelter 10 women experiencing homelessness for two weeks. The space opened March 22, and she is partnering with community groups to set up longer-term solutions.

Rue Simmons hired 5th Ward business Dial A Maid to clean the space but said preparing the home was a community effort.

“It is a space that is full of love from the community,” Rue Simmons said. “And I hope that is felt as the women are there.”

Getting volunteers has been an increasing struggle. Kouba said Connections for the Homeless has had to discourage volunteers who are at high risk for complications from the virus from participating. Social distancing requirements have also limited the number of volunteers and staffers allowed in a place at a given time.

Interfaith Action is also operating on a lower volunteer staff than usual but has maintained a team large enough to keep running, Murphy said. The organization is monitoring all of its volunteers for symptoms, and many volunteers are choosing to stay away from their grandchildren and other loved ones to reduce the risk of infection.

Additionally, Jones said the current crisis is increasing the number of individuals with financial insecurity.

Right now, local authorities have suspended evictions in the short term, but Jones said that rule only helps individuals who are currently experiencing financial hardship. It does not yet protect workers who will lose their jobs in the coming weeks and may struggle to pay their bills in the future, after the suspension lifts.

Over 3.3 million Americans filed for unemployment benefits last week, and economists warn that by April over 40 million Americans could lose their jobs. They expect the current period of financial instability to continue well into the summer.

“Immediate (help) is good, but six months from now, it’s still going to be an issue,” she said. “The virus isn’t going to go away, and the economy isn’t going to quickly recover. It’s going to have to rebuild.”

Compounding the challenge, COVID-19 prevented many local nonprofits from participating in gala season, a major source of revenue for these organizations, Jones said.

Evanston organizers praised the Evanston community’s assistance. But these organizations’ leaders also said this level of support needs to continue for months to maintain operations at their current pace.

Residents who want to help can donate shelf-stable items, such as canned goods, to local organizations like Connections for the Homeless and Interfaith Action. These organizations are also often looking for hygiene products and to volunteer in-person where necessary.

“As long as the collaborations continue, with city leadership and the nonprofits and community members,” Kouba said. “I believe the North Shore and Evanston community will really rise to the occasion to ensure that our homeless neighbors have somewhere to go and to be able to safely shelter in place.”