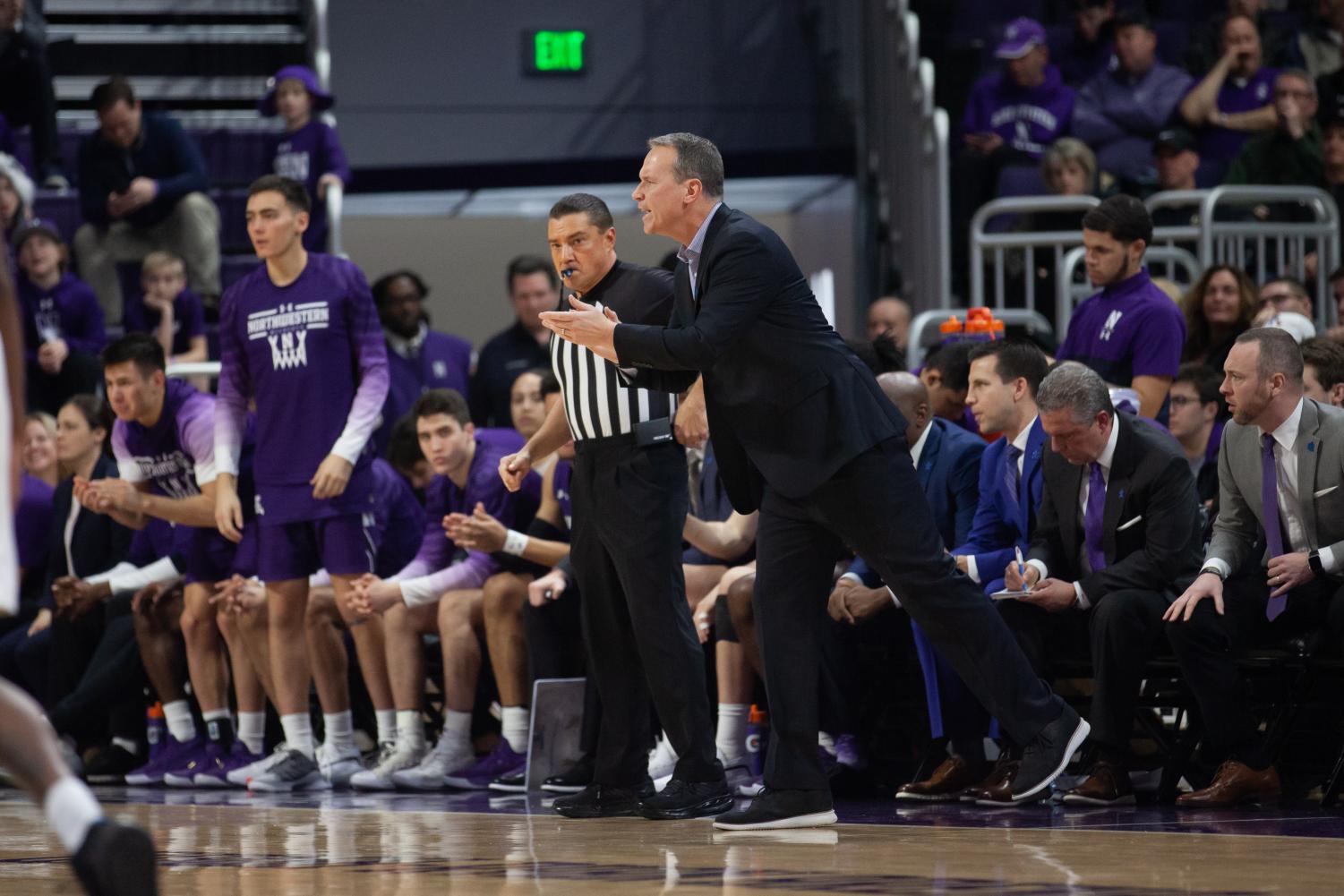 Men’s Basketball: ‘We’re going to win’: A glimmer of hope as Northwestern turns the page

Kim Collins was waiting on the sidelines after Northwestern’s upset over No. 20 Penn State on Saturday. Security had just kicked off the students who tried to storm the court after the game, and Kim, head coach Chris Collins’ wife, was told to stand behind the basket.

It had been a while since the Wildcats had this much to be excited about.

NU (8-22, 3-17 Big Ten) beat the Nittany Lions (21-10, 11-9), meaning the Cats would end the regular season winning two of their last three games. According to Collins, this counts as the late-season breakthrough he’s been anticipating all season.

“I’ve been telling them all year, keep putting yourself at the doorstep,” Collins said. “Keep banging on the door, and eventually when you bang, it’s going to break through. Two of these last three games, it broke through for them.”

By any statistical measure, NU had a bad season. The Cats set a school record for most Big Ten losses, and they’ll end the year with the second-to-worst offense and the worst defense in the conference.

Collins admits the losing took a mental toll on everyone. There were too many “air it out” team meetings where he tried to rally the troops. Wins were really hard to come by.

“If you look at our record, there are a lot of people out there who would just quit,” senior captain Tino Malnati said. “But as you can tell by the way we’ve been playing, we stay committed every day, guys are coming in and working on their game. When you keep doing that, eventually it will pay off.”

If there was a defining quality for the Cats this season, it was an inability to close out games. Collins said he first noticed that might be an issue in NU’s closed scrimmage against Vanderbilt back in October, and then the Cats went 3-11 in single digit games this season.

After several of those games, the opposing head coach would tell Collins his team was going to be good in the future. First, NU had to learn how to win.
“I’m disappointed we only have eight wins, there’s no question about it,” Collins said. “I was just hoping they could taste some success. That’s been my biggest challenge as a coach because I saw what our guys were putting into it. When you keep going into the locker room with heartache and defeat, you can get beaten down. My whole thing with these guys has been to keep at it.”

Against Penn State on Saturday, the Cats responded to game pressure better than they have all season. NU led 55-54 with 9:50 left in the game, and then the Cats went on a 17-2 run over the next four minutes.

Freshman center Ryan Young finished the game with a team-high eight rebounds and three blocks, and he hit a crucial and-one hook shot that helped put the game away.

“I really like this core, and I really think these guys are going to do some really great things in the future,” Collins said. “Anytime you can finish the year with some wins, that builds momentum heading into the offseason. Our guys are really excited about going to (the Big Ten Tournament) next week, playing free and seeing what they can do.”

A feel-good win like this still doesn’t eliminate the struggles the Cats went through all season. Questions remain about Nance’s long-term role in the offense, Buie’s inconsistent shooting and Kopp’s ability to be this team’s number one option.

Collins said after the win there’s still a lot of work to be done –– the players need to get better and stronger, and the coaches need to keep adding players to the team.

Collins will get the chance to deliver on his promise to turn NU into a consistent winning program. And if that ends up happening, Saturday’s win over Penn State would be one of the program’s biggest turning points.

“You look at this season, and eight wins doesn’t look great, but these guys are going to do some really good things over the next couple years,” Collins said. “We’re going to win, and our guys feel really good about where we’re headed and what’s going to happen, starting even next year.”