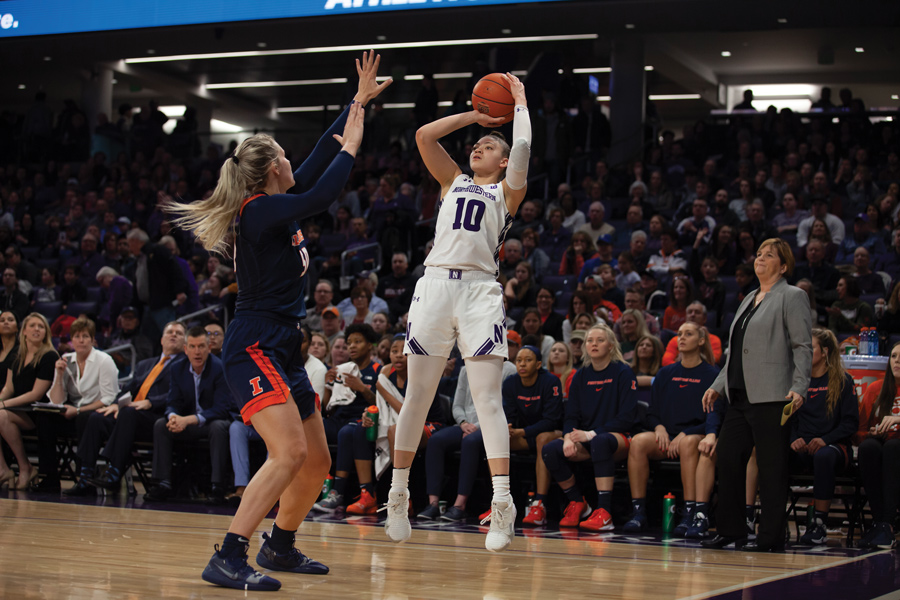 Lindsey Pulliam takes a jumpshot. The junior guard will look to lead NU to a Big Ten tournament championship.

Women’s Basketball: No. 2 Northwestern to face No 7. Michigan in Big Ten Tournament quarterfinals

Starting in early November and lasting until Leap Day, No.11 Northwestern put together one of its best regular seasons in program history.

Despite a run to last season’s WNIT Final, not many people believed the Wildcats would be as successful as they have been in the 2019-20 campaign. But over the last four months, NU has constantly proven its doubters wrong.

The Cats (26-3, 16-2 Big Ten) showed they could compete with top conference talent early on when they defeated then-No. 12 Maryland 81-58 at Welsh-Ryan Arena on New Year’s Day and secured a come-from-behind overtime victory against then-No. 15 Indiana at Assembly Hall on Jan. 16.

These victories propelled NU into the national spotlight and helped the team receive its first ranking in the AP Top 25 since Jan. 4, 2016.

On the other side of the ball, NU’s defense — tied for the second-best in the conference — holds its opponents to 56.7 points per game and is piloted by one of the best defensive guards in the country: Big Ten Defensive Player of the Year Veronica Burton.

The past week has been special for the Cat and rose to a season-best No. 11 in the AP Poll.

As the second seed in the Big Ten Tournament in Indianapolis, NU has the chance to win its first conference tournament title ever. But to get there, the team has to go through formidable conference opponents, starting with No. 7 Michigan (20-10, 10-8) on Friday night in the Big Ten quarterfinals.

“We’ve got our hands full,” coach Joe McKeown said. “Michigan we had two great games. But really, we’re just focused on us more than anything else.”

The Cats will need to perform well against the Wolverines, who played NU close in both matchups this season.

On Jan. 30, the Cats edged out an 81-73 win over Michigan at Welsh-Ryan Arena, thanks to 32 points from Pulliam and a huge 28-17 run in the second half. Two weeks later, NU countered a loud Crisler Center crowd to defeat the Wolverines 66-60 for its first win in Ann Arbor since 2015.

Michigan — who beat No. 10 Nebraska 81-75 on Thursday night — is led by forward Naz Hillmon, the conference’s fifth-best scorer. Stopping Hillmon — who averages 17.2 points — will be the key for NU’s defense. The Cats struggled to guard Hillmon in Evanston — where she scored 27 points — but NU’s defense stifled the sophomore on her home floor and held her to only eight points.

A win against the Wolverines could potentially give the Cats a rematch against No. 3 Iowa, who defeated NU 77-51 in January and prevented them from receiving the tournament’s top seed.

But to win the Big Ten, Scheid knows NU must focus on only one game at a time.

“That’s how we built ourselves up,” Scheid said. “Having a chip on our shoulder and always walking on the court being ready for the game, no matter who the opponent is.”