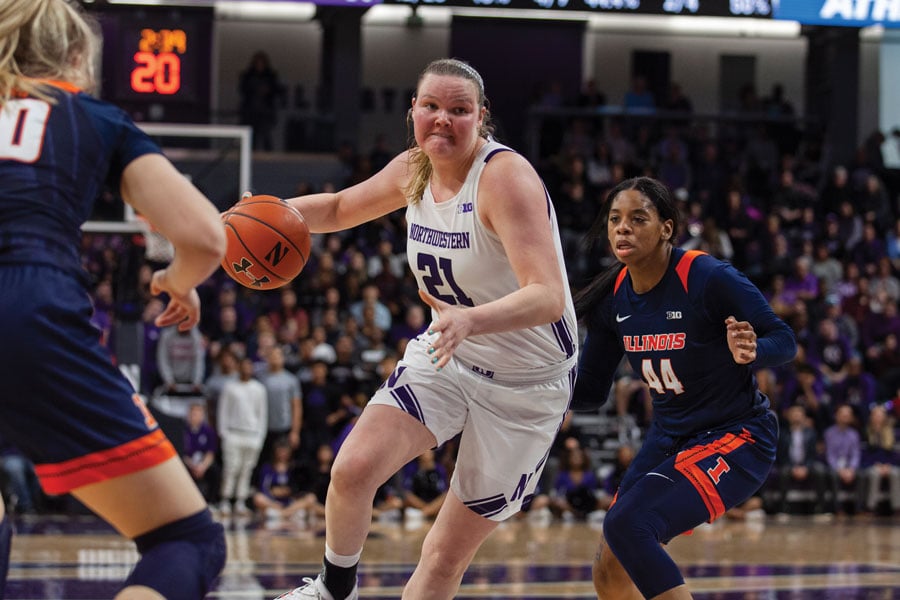 Abbie Wolf makes a move against Illinois. The senior forward/center has developed into one of the Big Ten’s best post-up players in her four years in Evanston. (Daily file photo by Joshua Hoffman)

Abbie Wolf makes a move against Illinois. The senior forward/center has developed into one of the Big Ten’s best post-up players in her four years in Evanston.

Women’s Basketball: Abbie Wolf joined Northwestern without her own post-up game. Now she’s the anchor inside for the Big Ten champs

Greenwich High School girls’ basketball coach Chrys Hernandez took a long flight to attend the senior day of one of her program’s most famous alumni this past Saturday. Her decision proved to be a worthwhile one when that alumnus, Northwestern senior forward/center Abbie Wolf, dominated Illinois in the post and gritted her way to 21 points, nine rebounds and three consecutive and-ones in the Wildcats’ win.

Amid the postgame celebration, Hernandez couldn’t resist ribbing her former player. Where had all those and-ones come from?

“We were joking this weekend, when did you get a post-up game?” Hernandez recalled to The Daily. “(In high school), she didn’t like playing with her back to the basket. She had a face-up game. This weekend, seeing her get all of those and-ones in such a short amount of time and getting the rebounds the way she did, I can see that she has settled into what she always has: doing what is best for the team.”

NU is a Big Ten champion for a multitude of reasons, and Wolf is a major, if oft-overlooked, one. The Cats boast the nation’s 3-point leader in senior forward Abi Scheid and an offensive dynamo in junior guard Lindsey Pulliam, but Wolf’s contributions have been a driving factor behind NU’s success.

“Wolf has been great all year,” coach Joe McKeown said. “She probably hasn’t gotten a lot of attention at times, which (happens) when you have a Lindsey Pulliam or Veronica Burton or Abi Scheid. But she has changed games and has bailed us out of a lot of games, too. She can score on the blocks and she can defend the best post players in the Big Ten. We’re going to need her this week, next week, every week that she has left eligible for us.”

Wolf’s reputation as a dominant force preceded her starting high school in Greenwich, Conn. The daughter of an Olympic shot putter and the younger sister of two Division I athletes, Wolf carved out her own mark on the basketball and volleyball courts. Hernandez heard the buzz around Wolf, but didn’t bank on a smooth transition.

“Abbie came in my fourth year at the high school and everyone was talking about how great she was. And coming in from middle school, Abbie was by far the biggest and tallest kid Greenwich had seen in a while,” Hernandez said. “I was skeptical, not because I had ever seen her play, but because it’s a different level from middle school to high school. I wasn’t drinking the Kool-Aid and wasn’t sure she could handle the rigors of the high school game.”
It didn’t take long for Wolf to make an impression on her new coach.

“I’ll never forget the first time I saw her on the court,” the coach said. “She came to play in our fall league before our season, and she cut baseline and received a pass from the guard driving to the basket and took a reverse layup on the baseline. Everyone in the gym went crazy. That’s when I knew. There was no hesitation. It was just an innate, this is what I’m supposed to do. I knew we had something special on our hands.”

Playing a style predicated on size and finesse, Wolf proved to be a generational talent for the Greenwich Cardinals. She lit up the stat-sheets and was the Cardinals’ third-ever player to reach 1,000 career points, but her impact became most apparent in the wins column. During Wolf’s senior season, Greenwich reached the state championship for the second time and broke its single-season wins record — not unlike another team Wolf would helm four years later.

Wolf did her due diligence in her college search, prioritizing the basketball culture and academics of her prospective schools. After taking her visit, Wolf saw NU as a clear fit.

“I remember sitting at Walker Brothers with Coach (Kate) Pop(ovec) and Maya Jonas, my host,” Wolf said. “The conversation was flowing and wasn’t forced at all. I just knew it was my people, and I wanted to do everything here.”

Wolf has certainly made the most out of the academic side of her choice. A journalism major in Medill, she has worked with Northwestern News Network’s Sports Night and spent a quarter in South Africa for her journalism residency immediately following last year’s WNIT tournament. She’s reaped the rewards of her basketball education as well.

Over her first two years, Wolf played sparingly for a Cats team that bounced around arenas and struggled in the competitive Big Ten. Wolf took on a more significant role in her junior season and helped NU make a deep run in the WNIT.

Then the Cats — and Wolf especially — turned the corner. Wolf flourished in a starting role and earned an All-Big Ten Honorable Mention nod, averaging 11.6 points and 6.6 rebounds for a team that has risen to the top of the Big Ten. Against powerhouse Maryland on December 31, Wolf reached double-digits as the Cats pulled off a season-altering upset and earned a statement victory.

“Over the years there have been a lot of moments, but New Year’s Eve beating Maryland that handily, it was like, ‘Wow, we’re really doing this thing,’” Wolf said. “The wheels were in motion. The rest of the Big Ten was really put on notice after that.”

NU needed a win against in-state rival Illinois to clinch a share of the Big Ten title, but the Fighting Illini pulled within six early in the third quarter. Then, Wolf took over and put on a vintage performance. The senior attacked the Illinois defense in the post and scored and-one layups on three straight possessions to extend the Cats’ lead to 11. A quarter later, NU had a Big Ten title.

The confetti-filled celebration was sweet, but the result was hardly a surprise for Wolf.
“We’ve been breaking it in the middle of the court for practice saying ‘Big Ten Champs’ since my sophomore year, when we were near the bottom,” Wolf said. “We’ve always seen it in ourselves, but preseason, people were ranking us middle, back of the pack, which was pretty insulting. We always play with a chip on our shoulder, from (the) WNIT to playing Duke and other top teams. Now, the rest of the country knows too.”