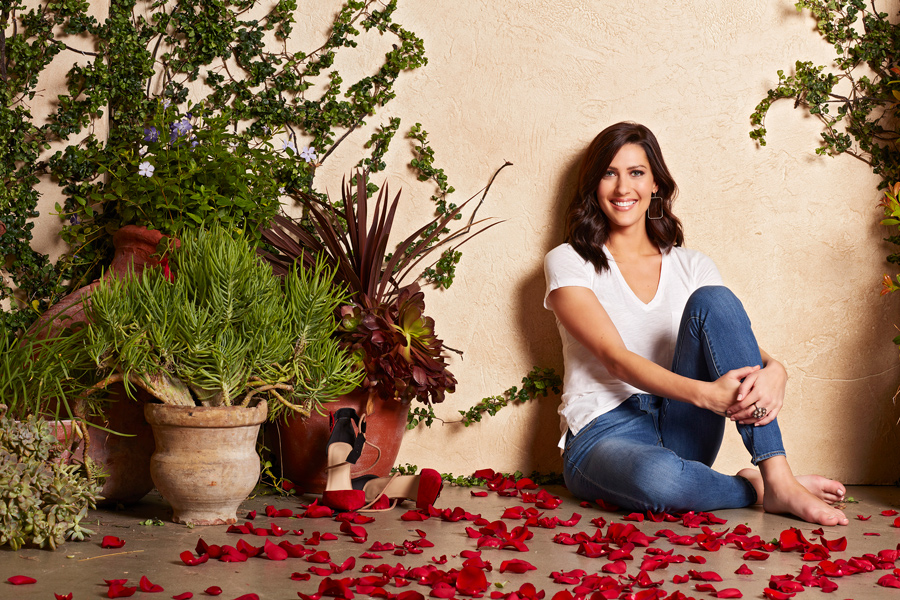 Becca Kufrin. The reality television celebrity is one of the cohosts of “The Bachelor: Live on Stage,” coming to Chicago March 14. (Source: Grace Valtos)

Becca Kufrin. The reality television celebrity is one of the cohosts of “The Bachelor: Live on Stage,” coming to Chicago March 14.

Despite hailing from Minnesota, former Bachelorette Becca Kufrin is a ’Cats fan through and through — Kufrin attended a Northwestern football game and “fell in love” with Evanston before she fell in love on national television. After her now-iconic breakup with Arie Luyendyk Jr., Kufrin found her other half in her season’s winner Garrett Yrigoyen and is now helping others do the same alongside former Bachelor Ben Higgins in “The Bachelor: Live on Stage.” The live show aims to squeeze an entire season’s worth of content into two hours. Ahead of their Chicago date on March 14, Kufrin sat down with The Daily to chat about playing the Chris Harrison role, navigating Bachelor nation and why she has no plans to tie the knot anytime soon.

The Daily: How did you become involved in the Bachelor: Live on Stage?
Kufrin: It was actually announced months before I was even brought on. The folks over at ABC and Warner gave me a call, and they were like, “Ben needs a co-host. We want you to meet with the director and chat through this and see if it’s something that you’d be interested in.” And at first, I was like, “Oh, my gosh, do people need to get engaged after two hours on this show? And if that’s the case, I want no part in it”’ And they assured me that wasn’t the case, thank God.

But I met with the director … and he was walking around this empty dance studio, explaining what goes into the show and how it’s going to be laid out and everything. And at that moment, I was like, “Yes, sign me up. I want to be part of this.”

The Daily: What do you hope people coming to the show will get out of it? Do you think there will be true love found on stage?
Kufrin: It’s much more fun and carefree than the actual show. You’re still getting some awkward, tense moments, but you’re still getting laughter, and we have seen some connections, like there’s definitely been kissing going on on stage, which always makes our nights very fun. But some of the couples that we’ve worked with have continued now to date. I mean, granted, it’s still a pretty new event — two weeks into this — but one of our first couples that we actually had at one of the first shows, as far as we know, they’re still dating. And so I think it’s definitely unconventional. It’s definitely probably a really weird, nerve-wracking way to date someone and to meet someone. But I think in this day and age, when people meet in the most random of ways, it really can work.

The Daily: You’re almost two years removed from your season of The Bachelorette now. How have you navigated Bachelor Nation in that time, And how do you feel like your role in it has evolved?
Kufrin: I always call myself an old, washed-up Bachelorette now. It feels like longer than two years ago. It was definitely an adjustment going from being the Bachelorette to — I can’t say “normal life” because it’s definitely very different from my pre-show days. But I tried to just stay in touch, make connections. And so that’s been one thing that was really nice about my time as Bachelorette, is to stay in touch with the producers and the executive team to now have these opportunities come up. You know, I never thought, had you asked me two years ago, when I was the Bachelorette that I’d be hosting a live show or hosting the official Bachelor podcast. I would have said, “There’s no way. That’s crazy.” But here we are. I feel like I really lucked out. I see some people leave the show and they don’t have the best experience. They don’t have the best memories, they really want nothing to do with the show. And that’s not my case at all. I have so much to give to the show and nothing but thanks because it helped me find Garrett, and now I have all these really exciting opportunities.

The Daily: You are one of very few leads who is still with their final choice from the show. Why do you think the process worked for you when it often doesn’t?
Kufrin: I had gone through some relationships in the past — and obviously, my relationship with Ari — that didn’t work out. I realized what I did and did not want in a relationship. So when I went into the role as Bachelorette, I stuck to my guns and I really wanted to find what I needed for myself . And I just think as women we’re more intuitive, so it tends to work out a little bit better for Bachelorettes. We listen to our head and our heart instead so we don’t just get distracted by who’s the prettiest. I think I’ve been through a lot of relationships that really showed me what I wanted in a partner. And so, when I went into my season, I went in with the goal of “I’m gonna really try to make this work and find somebody that’s right for me, and if it’s not right for me, I’m not going to just do it because you’re expected to end up with somebody.” And that was what was so special with Garrett, with him, the second I met him, I knew he was someone very, very special and who I was definitely interested in.

The Daily: How do you think your relationship has evolved over the past two years?
Kufrin: Me and Garrett have talked about this at length. We feel like our relationship really didn’t start until we were done filming. Our relationship wasn’t easy. It’s a really weird transition going from the show. I’m from a small town in Minnesota. He was living in Reno. This wasn’t our norm. This wasn’t something where we had any idea what to expect. So we just kind of had to navigate it together — really just compromise and put our relationship first, especially when there’s so many eyes and ears and comments and social media flying around us … but I think in the long run, it just made us stronger. We got to know each other in a quicker way because we were traveling so much and we’re being exposed to all these new different things where we really had to lean on each other and see how we could handle things together. But he’s just been the absolute best support system and partner and best friend through all of the changes over the past couple years.

The Daily: Any plans to tie the knot soon?
Kufrin: [laughs] That’s the number one question I get asked. This tour has taken up quite a bit of time. I could not imagine doing this tour and the podcast and and trying to plan a wedding. I would probably have gray hair everywhere. I think we’re just gonna still probably take this year to see how things go. And then once things maybe die down, I don’t know if that is going to happen anytime so, but we definitely want to figure out where we want to settle down for good in a couple years and just go from there. So baby steps. It took me so long to convince him to let me get a dog. So now we’re just kind of chilling in this moment right now.

The Daily: Do you have any advice for younger college students looking for love?
Kufrin: Give it time. When I was in college, when I was younger, back in the day, I had this whole plan, I was like, I’m going to graduate college, I’m gonna get married, have kids and buy a house. And obviously, that was not the case. And thank God it wasn’t, because I really had a lot of growing up and learning and living on my own to do. So just take things slow, don’t rush anything, don’t have a plan, because usually that doesn’t work out. And just really enjoy being single being in your 20s, dating and just seeing where life takes you, because you really never know where it’s gonna go.