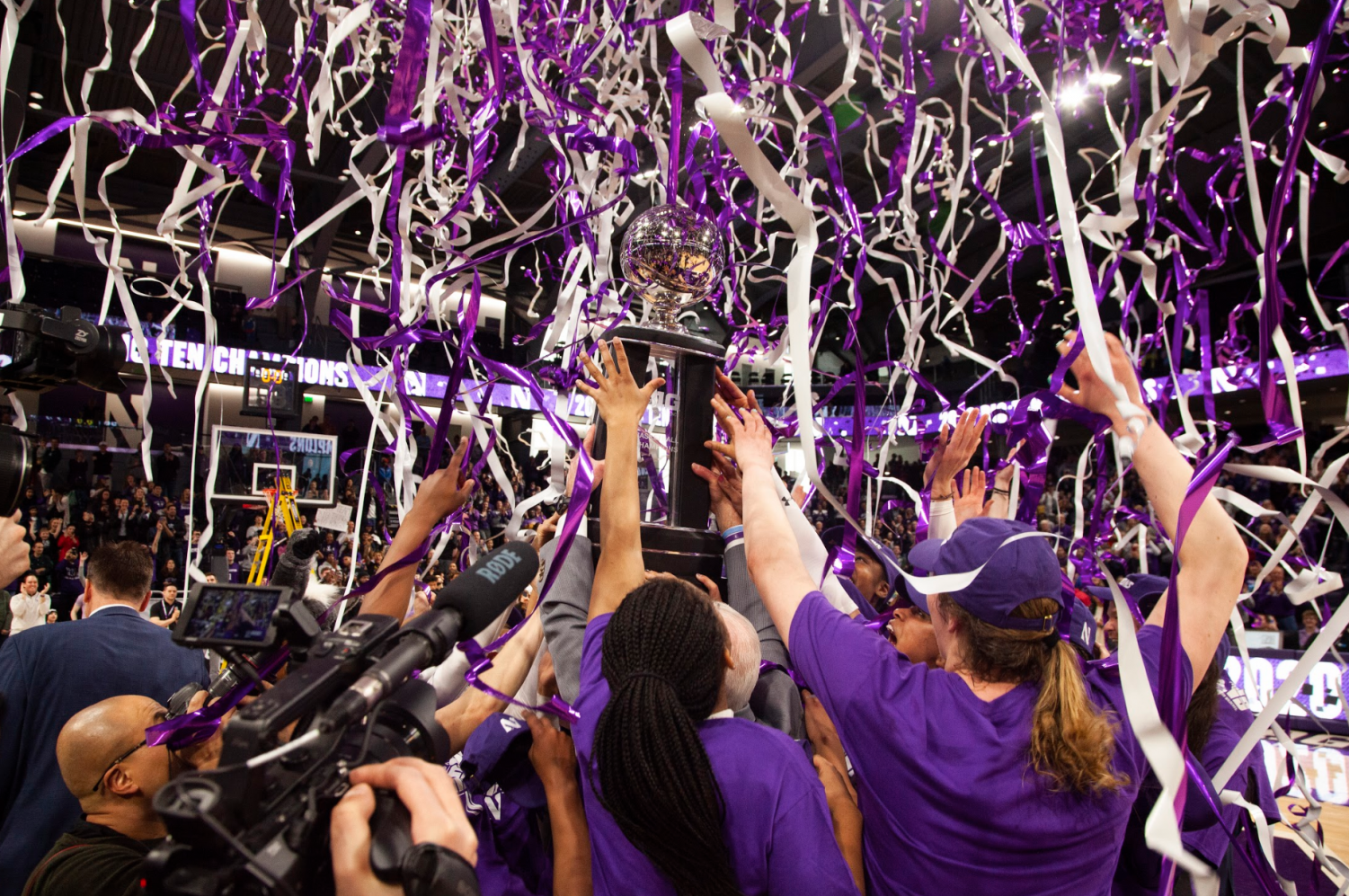 Women’s Basketball: ‘Nobody believed us’: Northwestern climbs the ladder to its first Big Ten championship in 30 years

With ten seconds left in the game, one usher at Welsh-Ryan Arena turned to another and asked what he was supposed to do when the clock ran out. If there’s a procedure at Northwestern for how to handle students rushing the court after a win, no one gets much of a chance to practice it.

Finally the clock struck zero, the two ushers looked at each other and shrugged and hundreds of students stormed the court to celebrate a championship.

This was Welsh-Ryan Arena like it has never been seen before.

The party on the floor lasted almost an hour. The players formed a dance circle in the middle of the floor as streamers rained from the ceiling. Head coach Joe McKeown hugged everyone he crossed paths with before being handed the Big Ten championship trophy and lifting it as high as he could with players grabbing at his shoulders.

Then he took the microphone and addressed the crowd.

“I want to thank the greatest fans in the Big Ten,” McKeown said. “I’m telling you, we’re not done yet.”

When athletic director Jim Phillips hired McKeown in 2008, a moment like this was nice in theory. But really, it seemed unrealistic. The Wildcats had won 27 games over the previous four years before hiring McKeown, and Phillips didn’t mince words when he offered him the job twelve years ago.

“He said to me, ‘You’re going to have some heavy lifting when you get here,’” McKeown said. “And he was right.”

In 2015, McKeown led Northwestern to its first NCAA Tournament since 1997. But after the Wildcats graduated the star players who led that team, the program was back in the middle of a rebuild.

The low points came in 2017-18 when Northwestern played its entire home schedule at Evanston Township High School. Relying on a young Lindsey Pulliam and Abi Scheid to carry the team offensively, the Wildcats finished that year with just four conference wins. And they played most of their home games with fewer than 1,000 people in the stands.

From there, it felt like a long climb to the top of the Big Ten.

Even this season –– with an experienced returning core coming off a run to the WNIT Final –– Northwestern wasn’t projected to be one of the six best teams in the Big Ten in 2019-20.

When Northwestern beat the Terrapins by 23 points this season on New Year’s Eve, the Big Ten championship didn’t look so unrealistic anymore. Then the Wildcats rattled off 15 wins in their next 17 games, including a buzzer-beater to beat Minnesota and a two-point overtime win at Indiana.

Even when Northwestern was sitting at the top of the conference standings, the players wrote “Rank Us” on the locker room whiteboard until the Wildcats could be found in the AP Poll. Even when the team was ranked, they watched conference rival Maryland consistently get a higher ranking.

“Nobody believed us,” Pulliam said. “But we all believed it.”

On Saturday, 4,016 fans believed in the Wildcats.

Northwestern needed to beat last-place Illinois to clinch a share of the conference title. The last time these teams faced off at Welsh-Ryan Arena, 1,129 people were in the stands.

There were so many people in the student section that late-comers were turned away and told to go to another area. For the first time since the arena was renovated, Northwestern let fans sit in Welsh-Ryan’s upper deck. There were more students sitting in the upper deck Saturday than there were total students at the Wildcats’ last home game. Football players were sitting in the aisles.

“It was great to have all those people there to support us,” Galernik said. “We’ve had a very memorable season, and the crowd was a great way to encapsulate that.”

When the game ended, Northwestern’s students stormed the court for the first time since Dererk Pardon hit “The Shot” to beat Michigan in 2017. They swarmed around Pulliam and encouraged Northwestern’s star junior to dance.

She’s been so good under pressure all season, but this time Pulliam just smiled.

Eventually, every player and coach climbed up the ladder and cut down a piece of the net for the first time in their Wildcats’ careers. McKeown got the last piece and waved it around in the air.

“It’s been a while, so I just didn’t want to fall,” McKeown said. “I was going to do a chin-up on the rim, but then I remembered I’ve got an Achilles and patellar tendons that might get hurt.”

But McKeown and Northwestern made it to the top, and really that’s all that matters.