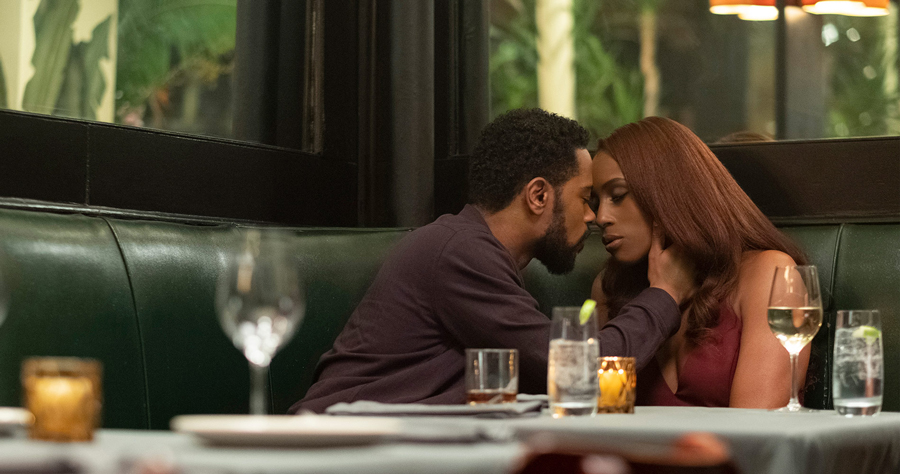 Lakeith Stanfield and Issa Rae in “The Photograph.” (Courtesy of Universal Pictures)

Lakeith Stanfield and Issa Rae in “The Photograph.”

Lakeith Stanfield has really been in his bag lately: playing prominent roles in “Uncut Gems,” “Knives Out,” and even “Little Women” (his performance as Beth March was stunning). So when I saw his name top billing for the new movie, “The Photograph,” I had high hopes, which were partially met.

While Stanfield, who plays rising journalist Michael Block, brings his typical alluring moodiness, his co-star, Issa Rae, doesn’t seem as comfortable within her role. The pair meets while Block is researching a separate story and runs into a lead about the recently deceased mother of Mae Morton (Rae). Morton, a museum curator (because, of course), is coincidentally investigating some letters left to her by her mother. The two go on a date and the rest is complicated, typical rom-com history.

Paired with a parallel love story involving Morton’s manic mother, Christina Eames (Chanté Adams) and her former lover, Issac Jefferson (“Insecure’s” Y’lan Noel), on paper, it’s the formula for an entertaining and moving romantic movie, perfect for its Valentine’s Day weekend release date. But on the screen, the movie fell somewhere between a success and a dud.

To start, Stanfield and Rae did have chemistry — as in, a deep lack of serotonin. Despite several opportunities to be funny and their normal charismatic selves, they both seem more depressed together than with their on-screen friends and family. Stanfield’s interpretation works better for his character, but Rae struggles to find her own, which is a common theme in her post-“Insecure” roles.

Despite her comedic roots not making a big appearance, the film still has plenty of funny lines, mostly delivered by Block’s brother, played by Lil Rel Howery of “Get Out” fame, as well as the main couple’s friends. Theoretically, this would mean the movie is more on the romantic side of rom-com, but even Block and Morton’s close moments are filled with more weightless stares and unrealistic dialogue than moving phrases. They have a cute first-date scene, but their subsequent interactions quickly fall apart. The pair just seems so… sad, probably because Block is such a bad journalist. (Never sleep with your sources!)

In the parallel timeline, which takes place in the ‘80s and ‘90s, workaholic single mother Eames can’t bring herself to stay with Jefferson and escapes small-town Louisiana for New York City to become a photographer. Eames’ character is a typical manic pixie dream girl who can’t stay put, ignoring Jefferson’s dependable nature for her future. Her personality is supposed to be reflected in her daughter, but the characters don’t develop enough to make that work, even though they have numerous chances to do so.

There are some highlights: Rae’s looks are next-level. That yellow dress? Plaid coat? Dark brown hair? Exquisite. The wardrobe department really popped off, which is unsurprising. The sets are also pretty, housing scenes in well-furnished apartments, quiet boats and aesthetically pleasing New Orleans jazz clubs. (However, the camera work leaves a lot to be desired — why so many shaky shots?)

I came in with pretty high expectations, but the poorly-paced plot muddled with confusing jazz interludes and undeveloped female characters left me wanting more as I left the theater. I’m glad we get to see more diverse representations of love on the screen, but alongside the rise of inclusive movies comes mediocre ones as well. This was a fairly substandard rom-com, but if you’re a huge fan of the genre or want to support black artists, you’ll probably find yourself enjoying this in theaters.

If you’re looking for a more acclaimed black romantic movie for Valentine’s Day, I’d suggest streaming films like established classic “Love & Basketball,” Oscar-winning “Moonlight” or acclaimed drama “If Beale Street Could Talk,” to name a few. If you really want to satisfy your Stanfield fix? Try “Sorry to Bother You” — at least he and Tessa Thompson have a more interesting relationship.