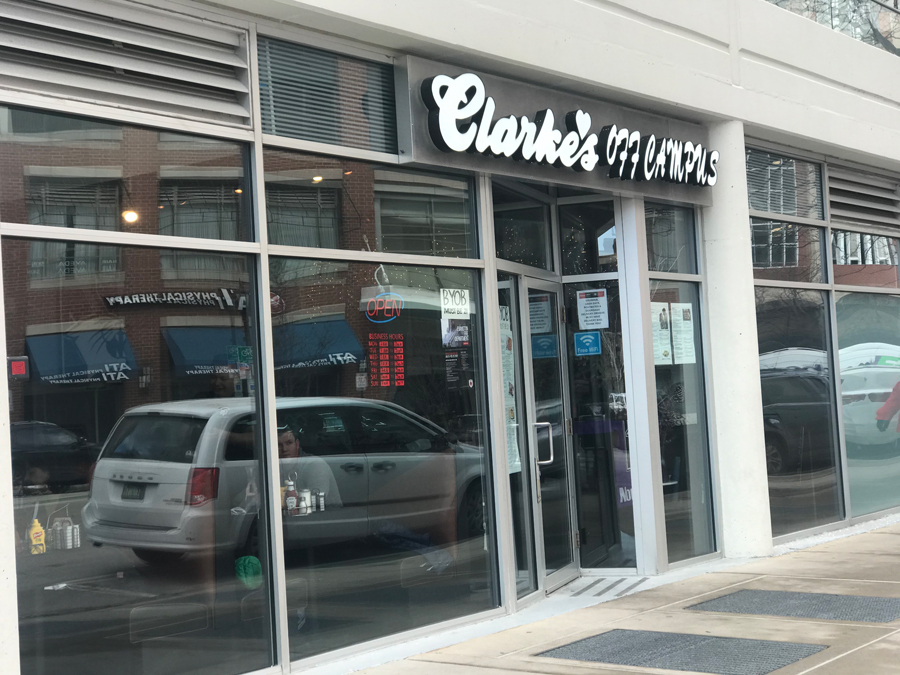 This past September, Clarke’s moved from its iconic home to further downtown, becoming Clarke’s Off Campus. (Crystal Wall/Daily Senior Staffer)

This past September, Clarke’s moved from its iconic home to further downtown, becoming Clarke’s Off Campus.

There are few things in life as satisfying as a perfectly poached egg — the bright yellow yolk is like sunshine in this never-ending winter. But when a plated egg lands in front of me, topping a bed of Canadian bacon and toast, there is a certain sense of anticipation. The dread of a possible overcooked egg sets in, and I begin to wonder if I should have just ordered pancakes. The feeling subsides when I cut it open, the yolk spilling over my breakfast. All I can say is: thank you for the sunshine, Clarke’s Off Campus.

Tucked beside Beck’s Book Store, Clarke’s has found a home in Evanston for decades. Hard to miss right on the aptly named Clark Street, the restaurant had always caught the eyes of new students and families. However, after my first visit freshman year, Clarke’s became less of a brunch establishment in my eyes and more of a late-night breakfast option — competitors like Le Peep and Ovo Frito Cafe just felt like a better alternative for family-weekend brunch.

But this past September, Clarke’s moved from its iconic home to further downtown, and now, Clarke’s Off Campus is a breakfast front-runner.

Sat just off the corner of Davis and Sherman, Clarke’s Off Campus has updated its decor without sacrificing affordability. Now, the inside is sleek, with a black, white and red color scheme and steel finishings. But the menu has remained virtually the same, with its iconic 60’s-style woman peer-pressuring me from the inside flap, saying, “Oh my, you should eat!” Inside, there is still a range of breakfast options like skillets, pancakes and omelets, in addition to lunch plates like sandwiches, burgers and melts. Breakfast staples like pancakes and waffles are mostly under ten dollars, though you could spend a bit more for specialty options like the German dutch baby.

But at its new location, the food was the best I’ve had since that first visit freshman year. Not only were the eggs cooked to my liking, but the English muffin was toasted to perfection and the hashbrowns were seasoned enough that I didn’t think to reach for the salt and pepper shakers. My friends devoured the French toast, deliciously decorated with the fruit of their choosing and dusted with powdered sugar. The bottomless coffee didn’t hurt on a Saturday morning, either.

When I saw Clarke’s had moved, I was shocked. I worried it would lose its standing as a frequented Evanston restaurant. But this move may have been what the restaurant needed to take it to the next level. While the relocation of the chain trades convenience for establishment, I believe that Clarke’s Off Campus will be a new family brunch spot to rival any other Evanston weekend institution.