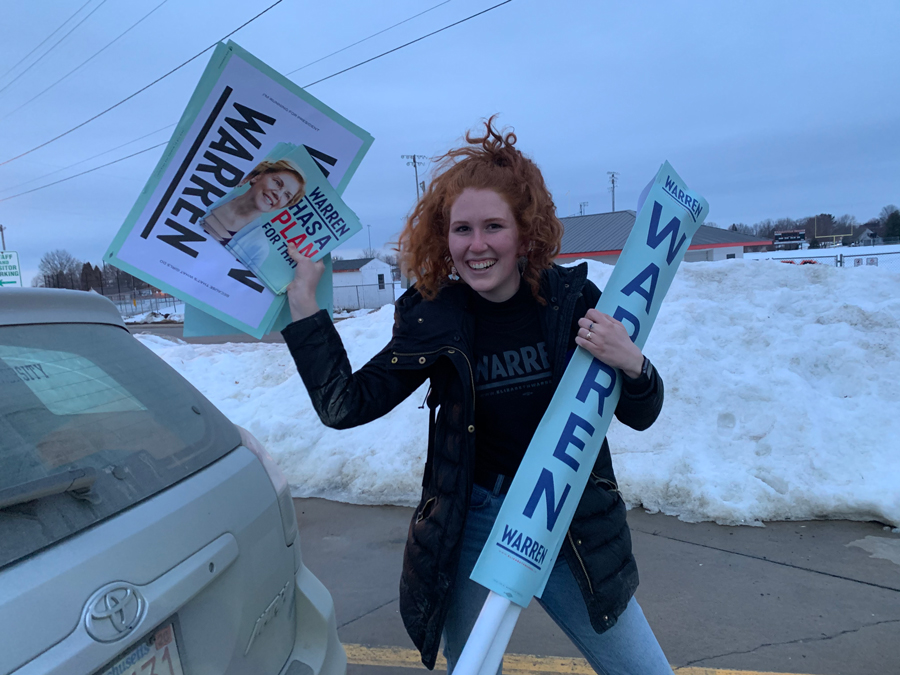 Communication junior Sophia Blake arrives at Pleasantville Middle School two hours before the caucus begins. She was assigned as a caucus night support team member for Elizabeth Warren, meant to persuade undecided voters during the realignments.

‘This is not what democracy looks like:’ Northwestern students travel to Iowa to canvass for candidates, attend historic caucuses

The Calm Before the Storm

INDIANOLA, Iowa — Sophia Blake hit the road at 9 a.m. on Monday, the backseat of her car plastered with empty Diet Coke cans, snack wrappers and U.S. Sen. Elizabeth Warren (D-Mass.) campaign posters. The Communication junior began blasting Dolly Parton’s “9 to 5” from her speakers on repeat — Warren’s presidential run walk-on song — to kick off her last day of canvassing in Iowa.

The Massachusetts native spent her summer stationed in Indianola, Iowa where she worked as a fellow for Warren’s campaign. She said she first heard Warren, her senator, speak at a town hall during her senior year of high school, and she was moved by Warren’s motto about the importance of structural change in policymaking.

“If my college education has taught me one thing, it’s that big structural change is the key to making any difference in the world,” Blake said. “Adjusting little things here and there — those are Band-Aids. Nothing will ever change if that’s how we view policymaking.”

Medill senior Samuel Maude volunteered for the Warren campaign during the summer. The Iowa native said he was originally undecided, but supported Warren after seeing her organizing efforts and progressive message. He believes Warren is a unifying force in the Democratic Party and has the potential to beat President Donald Trump.

Maude said the way Warren addresses problems with comprehensive plans and takes great empathy into formulating her ideas are reasons why she resonates with him. He flew home during the weekend to canvass in and near Waukee, Iowa where he is also a precinct captain for Warren. He said his job was to persuade residents to join her corner at Monday’s caucus, and report numbers to the Warren campaign.

“(Democratic) issues hit close to home for me, and I think Iowans — myself included — take this responsibility of leading the charge really seriously,” Maude said. “When I talk to people (at) those doors, a lot of people are (saying), ‘I just want to make sure I’m making the right choice for me and I’m making sure my voice was heard.’”

Weinberg freshman Kendall Kubis jumped at the opportunity to canvass for her first time for presidential candidate U.S. Sen. Bernie Sanders (I-Vt.). She said she found out about the opportunity through other Northwestern students, who organized a trip to Iowa.

“It’s a group of students who recognize that this is the most important election of our lives and want to do something to help Bernie get elected,” Kubis said.

Kubis said she thought Sanders had a good chance at getting the Democratic nomination this year compared to 2016 because he has been surging in polls. The most recent poll by Chegg/College Pulse Election Tracker reported Sanders to be the favored candidate among college students, at 43 percent.

Aside from supporting Sanders’ policies like Medicare for All and taking action against climate change, Kubis said what differentiates Sanders from the rest of the field is his authenticity. She said his conviction in his ideas and unwavering stances that he has maintained for his entire political career are what excites her and fellow progressives.

“I think it’s because he’s such an optimistic person,” Kubis said. “He draws in college students because (Sanders recognizes) that we do have the power to make these big radical changes.”

A candidate needs at least 15 percent of attendees to achieve “viability.” If that threshold isn’t met, a candidate’s supporters can either realign with a different candidate or join with a nonviable group to form a viable preference group. Each precinct is awarded a number of delegates, which is divided proportionally based on the final number of attendees after realignments.

When Blake arrived at the gym of Pleasantville Middle School as a caucus night support team member, she gave out stickers and talked to independent or undecided caucus-goers. However, when the caucus began, she was sent to the gym’s balcony and was not allowed to be on the floor of the caucus during the alignment process.

When Blake argued that her position was supposed to grant her access to talk to undecided voters and persuade them to caucus for Warren, she said she was threatened by officials from the Iowa Democratic Party to be kicked out.

After the first alignment, when it was deemed that several candidates did not meet the viability threshold, the IDP officials announced that caucus-goers sitting in the corner of non-viable candidates had to move to the corner of a viable candidate. This statement was factually incorrect because, after the first alignment, a non-viable candidate could still become viable if enough people joined the coalition such that they met the threshold — which actually occurred in the case of U.S. Sen. Amy Klobuchar (D-Minn.).

Blake began frantically waving at the Warren precinct captain from the balcony, but she was unable to communicate that there was a mishap. Five minutes before the second alignment, the IDP officials made an announcement that they made a mistake, but the Warren supporters had gotten out of their seats and flocked to other candidates’ corners. Blake said she called the campaign hotline and filed an official complaint with the IDP.

After heads were counted, it was determined that Klobuchar would receive two delegates and South Bend, Ind. Mayor Pete Buttigieg would receive five, but there were seven delegates remaining that had to be split between the tied former Vice President Joe Biden and Sanders coalitions. In line with official caucus rules, one supporter of each candidate came to the center of the gym and a coin was flipped to determine who received the extra delegate. Blake said she never heard of the coin-flipping rule until it happened right before her eyes, but maintained her optimism in spite of Warren’s non-viability.

“I’m getting texts from people in other precincts where we have 50 percent of the vote,” Blake said. “I’m reminding myself that this is one precinct out of 1600 in one state out of 50. This is not the end-all-be-all. We have invested so much into these communities, I have faith they’re going to invest back in us as a campaign, as a candidate, and as a party.”

With only 71 percent of precinct results released to the public the night after the Iowa caucuses, Maude reflected on the last 24 hours. He said he had a good time at his caucus, where he served as a first-time precinct captain in Waukee’s third precinct. Though there was a large coalition of Buttigieg supporters in the church parish hall, he said he was trying to court undecided voters and supporters of non-viable candidates to Warren’s side during the alignments.

Unlike the caucus Blake attended, Maude said his caucus ran smoothly. Warren barely reached the viability threshold after the first alignment, but when a tie resulted between the number of delegates for Warren, Sanders and Biden, the IDP officials gave Warren the extra delegate because she was two votes away from receiving one more. Maude said he arrived at home around 10 p.m., just as the news broke that the caucus results were not coming through on time.

After the chaos that erupted Monday night and the unreliability of the IDP, Maude said he began questioning the integrity of the Iowa caucus as the first chance for voters to indicate support for candidates. He said Iowa’s 90 percent white demographic doesn’t give a full reading of the country, and the large number of apathetic or undecided voters who were easily swayed during the caucuses are major problems with the current system.

“If you had asked me a month ago, I would’ve defended the Iowa caucus to my grave,” Maude said. “I honestly don’t think caucuses are necessarily the best way to go anymore for accessibility and a lot of other reasons. I think Iowa should probably switch to a primary at this point.”

– Evanston residents canvass for 2020 candidates in Iowa ahead of caucus