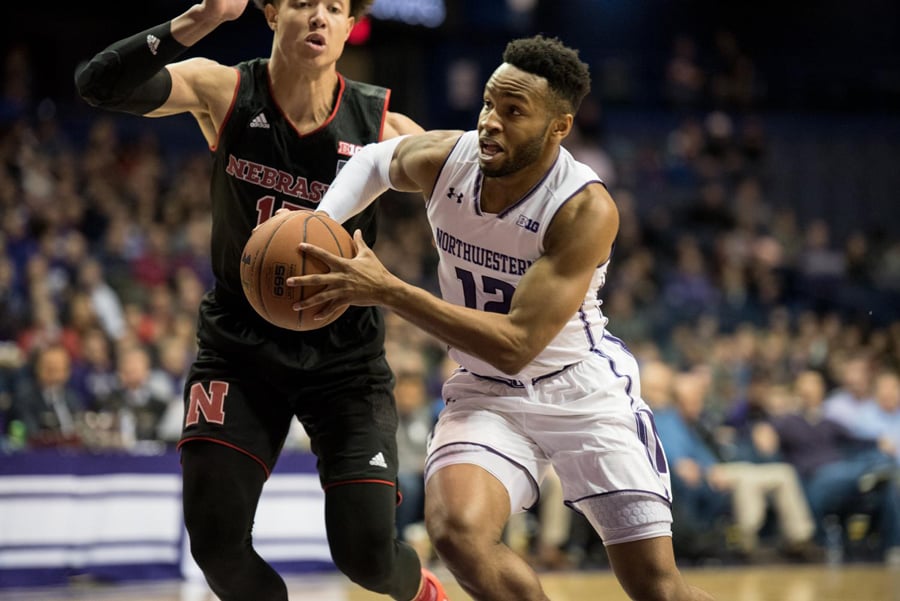 Isiah Brown drives to the hoop. The guard transferred from Northwestern to Grand Canyon after the 2017-18 season. (Daily file photo by Colin Boyle)

Isiah Brown drives to the hoop. The guard transferred from Northwestern to Grand Canyon after the 2017-18 season.

Men’s Basketball: Why is Northwestern the youngest team in the Big Ten?

Just three years ago, Northwestern was in the NCAA Tournament. Now, the Wildcats are the last-place team in the Big Ten and on pace to have their worst season since 2000. Over the next few weeks, The Daily Northwestern will look at the state of Northwestern men’s basketball in a series called “Waiting.” This is the first part of that series.

Coach Chris Collins isn’t shy about it. Northwestern’s coach spoke about it before the season started, and he talked about it as recently as Saturday after the Wildcats’ last-second loss to Purdue.

NU is the youngest team in the Big Ten, and the lack of experience shows.

“We closed the game with three freshmen and a sophomore on the floor,” Collins said Saturday. “The only way you figure it out is by being in these battles and learning really tough lessons, and feeling a lot of pain like they do now.”

The Cats (6-15, 1-10 Big Ten) are one of the most inexperienced teams in the country. They have two grad transfers on the roster, although only A.J. Turner had previously played college basketball. And their only junior on scholarship –– Anthony Gaines –– is out for the season with a shoulder injury.

As a result, Collins relies on four freshmen and three sophomores who had limited playing time last season.

NU didn’t plan for its team to be this young. The underclassmen on the 2017 NCAA Tournament team were supposed to be leading the program in 2020. Instead, walk-on Tino Malnati is the only player on the Cats’ roster who was on the team three years ago. 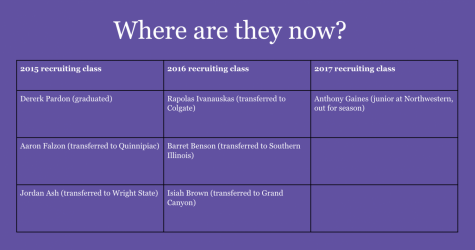 The Cats’ 2020 lineup wasn’t supposed to look the way it does now, but the five players who would have been the veterans on today’s team all transferred over the last two years.

“If you asked the other guys in my class, they would say the same thing: that Northwestern wasn’t a great fit,” former NU guard Isiah Brown told The Daily. “We didn’t feel like we would have an opportunity to make it work out, to grow and mature together, so we all took a different option.”

Brown admits that the 2018 season was difficult for him. He saw NU fall from the NCAA Tournament to the bottom-half of the Big Ten during his sophomore season, and he mostly watched it happen from the bench.

“My role on the team, trying to find the way that I could best help, it didn’t work,” Brown said. “It was difficult to find a spot, and I was trying to do the best that I could to help the team. When I was given the opportunity, I would try to do those things. I was able to at times, and at times I was inconsistent.”

Brown was a top-50 guard in his high school class, and the score-first guard saw consistent playing time his freshman season. Despite being Bryant McIntosh’s backup, Brown scored double digits in three of the first four games of his freshman season in 2016. The highlight of his first year was scoring 19 points against Maryland, and he was part of the Cats’ rotation throughout their NCAA Tournament run, averaging almost 15 minutes per game.

Then in his sophomore season, Brown played just 10.8 minutes per game. Some nights, he was completely out of the rotation, and he got just two minutes of playing time in the Cats’ loss to Penn State in the 2018 Big Ten Tournament. That was Brown’s final game with the program.

Brown decided to transfer after the season ended, and said he was looking for a team that would give him more freedom as a playmaker. After transferring to Grand Canyon, which won 10 games in the WAC last season, Brown gets to be a score-first guard, and is averaging 9.1 points and 29.3 minutes per game.

“I didn’t feel like I was a fit at Northwestern,” Brown said. “They were going in a different direction, and I felt it was best for myself and my career to put myself in a position where I could play a style of basketball that fit for me.”

Rapolas Ivanauskas remembers coming to the same realization –– that he wouldn’t be able to accomplish as much as he hoped if he stayed in Evanston. Ivanauskas went to high school just outside of  Chicago and was the third-highest rated recruit of the Collins-era when he signed.

But back-to-back shoulder injuries cost Ivanauskas his freshman and sophomore seasons, and he didn’t stay for a junior year with the Cats.

Even though NU could have used another forward in the 2018-19 campaign, Ivanauskas called a meeting with the coaches when the season ended and told them he was set on transferring.

“It was my scholarship, so it was my choice,” Ivanauskas told The Daily. “If I wanted to, I could have stayed. But I didn’t think that was the best decision for me. I knew I’d have more success by transferring.”

Because Ivanauskas hadn’t played much at the college level, he knew he’d need help to find another Division I program. Collins and assistant coach Brian James called other coaches on Ivanauskas’ behalf, and they helped him find Colgate University. Ivanauskas’ transfer worked out, and he was named the Patriot League’s Player of the Year last season and led his team to an NCAA Tournament berth.

Despite his accomplishments at Colgate, Ivanauskas called the decision to transfer one of the hardest of his life.

“When you’re finally independent in your life building a new community, it’s hard to leave it, especially if you like it there,” he said. “I loved Northwestern. But I made that choice, and it was the best choice to make to not be at Northwestern.”

Ivanauskas and Brown have stayed in touch with the other players who transferred from NU. Leaving the program, Ivanauskas says, gave them all a fresh start.

All five transfers have hit the ground running at their new schools. Ivanauskas has been the most successful of the group, and Brown has developed into a dependable scorer at Grand Canyon.

The other three transfers are also performing well. Barret Benson –– a former four-star recruit who went to high school less than an hour away from Evanston –– is averaging 10.1 points per game this season as Southern Illinois’ starting center.

At Quinnipiac, Aaron Falzon has been one of the best three-point shooting forwards in the Northeast Conference. Jordan Ash plays 16.9 minutes per game at Wright State.

The Cats have replaced those young players with a talented group of underclassmen –– the 2018 class of Pete Nance, Miller Kopp, Ryan Young and Ryan Greer is one of the best in program history. But freshmen and sophomores can only do so much.

Brown said he’s been impressed with how the Cats’ young core has stayed competitive and played a number of close games this season. But when asked what he sees as the trajectory of the program, Brown said he has no idea what to expect.

“I don’t wish them anything but the best,” Brown said. “I hope they figure it out. I hope those guys have great careers.”