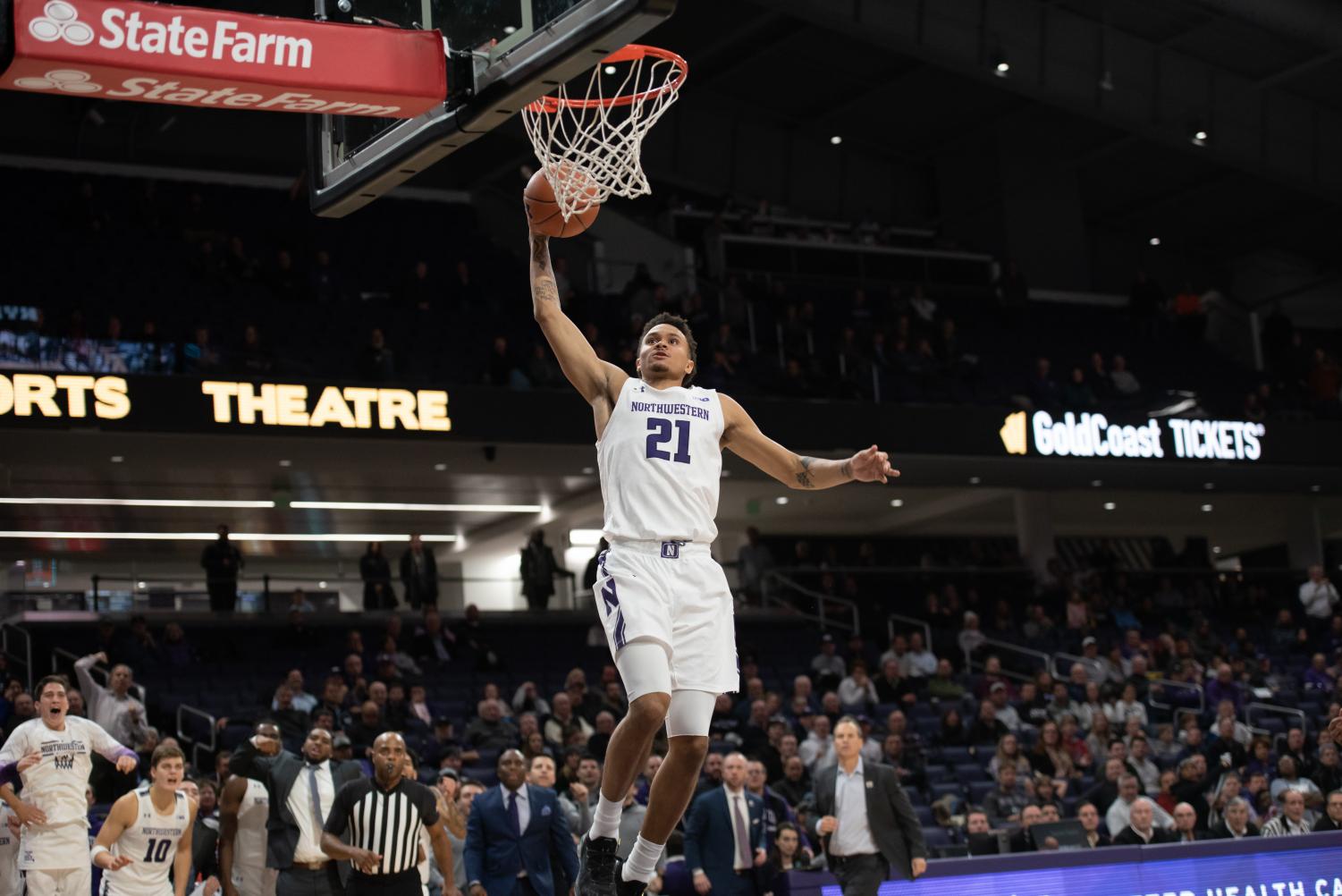 His high school teachers would call A.J. Turner with a simple request. Was there any way, they asked him, that he’d be able to spend a few more hours with their children?

Not as a tutor or a basketball coach, but as a babysitter. Unlike most star 17 year-old basketball players, Turner would say yes, and he always received rave reviews.

“I got pretty good,” Turner says, “at looking after younger people.”

Fast forward a few years, and Turner is the role model again. At Northwestern, the fifth-year senior is surrounded by underclassmen. In the Wildcats’ nine-man rotation, there are four freshmen, two sophomores, a junior, a grad transfer and Turner –– the only player on the roster who has played four seasons of college basketball.

There aren’t many more players in the NCAA with more experience than him. Over the last five years, he’s played with 52 teammates, transferred schools and has lost a starting spot seven different times. He’s one of the oldest players in the sport having the worst statistical season of his career.

But he already knows you have to grow up fast to make it in the Big Ten, that you can’t get caught up in a losing streak or a shooting slump.

“I’ve dealt with harder things than missed shots,” Turner said. “When you put it into perspective, life itself is challenging, so when it comes down to basketball you play it because you love it.”

Turner says he shares that message often with his teammates. NU’s season has been a rollercoaster ride, featuring dramatic losses against low majors and double-digit victories over NCAA Tournament hopefuls. The senior forward has been trying to make sure the underclassmen don’t get caught up in the highs and lows.

The Cats (5-4, 0-1 Big Ten) face their biggest test of the season Wednesday against No. 15 Michigan State (6-3, 1-0). Ever since last year’s seniors graduated and he became the only player on the team with knew what it’s like being thrown into the fire, Turner has been trying to help NU get ready for a game like this.

“Just because you won the last game, it doesn’t mean anything,” Turner said. “If you’ve lost the last game, you’ve got to learn from it. Either way, you’ve just got to come in and get better.”

A.J. Turner considers himself a big fan of rapper Nipsey Hussle. Hussle’s motto has become his motto, something he’s frequently said to himself during a difficult year in his life.

Turner’s journey has, in fact, been a marathon. He’s a native of Mount Clemens, Michigan, but he moved around a lot growing up.

His best friend’s mother recently passed away from cancer, and he honors her memory with her initials, “CB,” written on his sneakers. Those letters are right next to “CJ,” which are dedicated to a cousin who died this year. Next to that, he wrote “FP,” which stands for “Free Pops.” Turner’s father, Andre, is currently in prison.

“I’ve been through some stuff, and it just makes me stronger,” Turner said. “That’s why my confidence isn’t changing at all. I’ll keep working, and everything will take care of itself.”

Turner’s path in basketball has also been quite the marathon. Since he enrolled as a freshman at Boston College in 2015, he’s played with over four dozen players, ranging from 2018 Clippers lottery pick Jerome Robinson to Northwestern star Bryant McIntosh to role players like Ervins Meznieks and Jordan Ash.

In Turner’s first season with the Eagles, he played for a team even less experienced than this year’s edition of the Cats. Turner started almost every game on a team rostering ten freshmen, a team that was one of the worst in recent NCAA history.

Boston College went winless in the ACC and finished the year with a 7-25 record during Turner’s freshman season. But in his two seasons spent in Chestnut Hill, Massachusetts.
he said he learned how elite players carry themselves by defending opposing ACC stars like the New Orleans Pelicans’ Brandon Ingram, the Boston Celtics’ Jayson Tatum and the Indiana Pacers’ Malcolm Brogdon.

“The biggest thing for me was that I realized I didn’t know anything,” Turner said. “Coming out of high school, people think they can be ready. To some extent, some people can be ready, but you never really know what it’s like until you’re in it.”

Turner believed in the Eagles when he picked them over Harvard and Wake Forest in recruiting, but he decided to transfer after the team won nine games his sophomore year.

Anthony Gaines, who played with Turner at New Hampton High School, helped recruit Turner to play in Evanston. Turner announced his decision to transfer to play for the Cats in April 2017, on the heels of NU’s run to the NCAA Tournament.

Turner sat out the 2017-18 season, watching the Cats finish with a sub-.500 record the year after making the second round. When he was eligible the following season, Turner started the majority of the team’s games and scored a career-high 8.7 points per game.

Last offseason, three of NU’s seniors graduated and three more upperclassmen transferred away. All of a sudden, Turner was the only senior on the roster and the leading returning scorer.

Even though his role in the locker room has increased, he’s taken a step back in production on the court. He’s playing 45 percent fewer minutes this season and averages just 3.8 points per game, the lowest mark of his career. Turner is taking fewer shots per game than he ever has, and his field goal percentage is at an all-time low at 30.8 percent.

Despite all of this, Turner said he’s tried to be a constant source of positivity and leadership for a team that desperately needs a veteran presence. His former high school coaches say that’s a role that suits him.

“Being the lone senior presents different challenges,” said Nick Whitmore, who was Turner’s assistant coach in high school. “It’s something that he’s really confident in doing because he’s such a good kid. It’s a natural transition for him to step into that leadership role and bring the young guys along.”

Because over half the players in the Cats rotation are freshmen, the young guys have had to adjust quickly. And even though Turner was supposed to be NU’s best returning player, he says he’d be fine coming off the bench every game.

When head coach Chris Collins told him before the Cats’ first game that he’d be moving to a sixth-man role, Turner didn’t complain. He says he understands why Collins made the change.

“It’s just about the way our team is shaped,” Turner said. “(Miller Kopp) can knock down a bunch of shots. (Pat Spencer) is a great point guard for us, and (Gaines) is the best defender in the Big Ten. It’s not a knock on me, it just shows how good our team is when I come off the bench.”

Collins has been trying to get Turner back in rhythm, encouraging him to attack the basket instead of settling for contested shots. If Turner improves at getting to the rim, Collins said Turner can step back into the role he had last year.

“He’s just got to settle in,” Collins said. “We know A.J can play well, and he just hasn’t shot it well. That’s something he’s done his whole career… We’re going to play him and we’re counting on him as a fifth year senior to be a solid glue guy for us.”

Even though he’s having the worst statistical season of his career, Turner knows there are other ways he can impact the game.

In the offseason, Turner prioritized building strong relationships with every freshman on the roster. Now, he considers himself a reliable source of feedback when one of his younger teammates makes a mistake on the floor.

“The culture at Northwestern is always striving to get better,” Turner said. “Obviously, constructive criticism is important, so I’m focusing on the process and saying that every day is a new opportunity.”

Starting with the chance to upset Michigan State, Turner has 20 games left to turn around his final season and leave as big an impact on Northwestern’s underclassmen as he can.