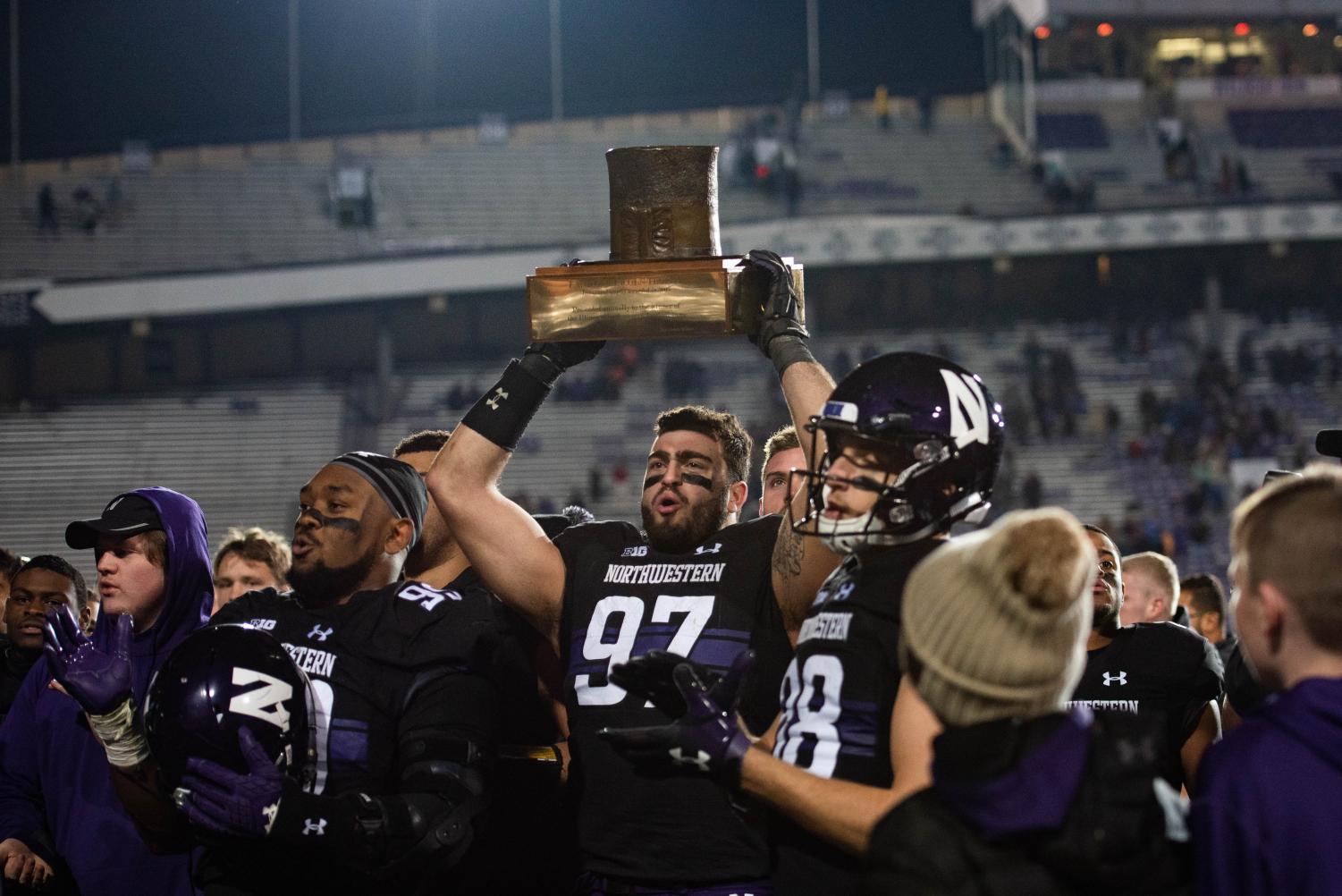 Joe Gaziano lifts the Hat trophy after Northwestern’s 2018 win over Illinois. The senior has been one of NU’s most productive players during his career in Evanston. (Daily file photo by Alison Albelda)

Joe Gaziano lifts the Hat trophy after Northwestern’s 2018 win over Illinois. The senior has been one of NU’s most productive players during his career in Evanston.

Football: On the brink of NU history, Joe Gaziano prepares to cap off a remarkable career in the midst of a not-so-remarkable season

It was third down at Michigan State’s seven-yard line.

Down by three points and looking for a shift of momentum, Northwestern’s defense had a prime opportunity to earn a stop and hand the ball back to its offense. Spartans quarterback Brian Lewerke took the snap — but he didn’t have much time.

One. Lewerke dropped back into the endzone.

Two. Lewerke stepped up into the pocket and scanned the field.

Thr- Down went Lewerke. Before he could even attempt to throw, Joe Gaziano knocked him flat on his back for a safety.

The Wildcats carried the momentum from the play and went on to win 54-40, with the then-freshman providing a spark for his team. But the sack was more than just a spark, it was the first sack of what has been an illustrious collegiate career.

“You look at the whole body of work — leadership, toughness, big plays, battling through injuries, a great teammate,” coach Pat Fitzgerald said. “Really proud of the career he’s had, led us to a championship a year ago, (I’m) just really thankful for him.”

Three years after his first sack, Gaziano now sits at 27.5, just one away from breaking Casey Dailey’s school record of 28 with two games remaining in a Cats uniform.

Unfortunately, not every great career has a storybook ending. For the first time in his five years, despite all that Gaziano and his teammates have accomplished with the Cats, he won’t be playing in a bowl game in his senior season.

Despite an underwhelming final season, it’s hard to overlook just how great Gaziano’s collegiate career has been.

Gaziano still remembers the first time he suited up for his dad’s third grade football team as a second grader.

The first time he learned how to put the pads in his pants.

The first time he put on the helmet.

“It’s a cool sport to watch and something I kinda wanted to get into,” Gaziano said. “To be able to put the helmet on, it’s just a surreal moment because you kinda see these icons on TV, running around, playing the sport… you want to be like those guys.”

Growing up in Scituate, Massachusetts, football was a major part of the Gaziano family. Less than an hour away from Gillette Stadium, Gaziano said “watching Patriots football on Sunday was a religion” for people in his hometown. By Monday, the talk of the town was about the previous day’s game, whether a win or a loss.

As if being in a football town in New England wasn’t reason enough, Gaziano’s dad, Frank, played at Lafayette. His dad encouraged him to watch football and his love for the game grew to the point that he wanted to emulate his idols on TV.

And there were plenty of players for Gaziano to look up to: Tom Brady, the late Junior Seau, Richard Seymour, Rob Ninkovich, Teddy Bruschi, Rodney Harrison, among others.

By the time he got to high school, Gaziano’s dedication to the sport had ramped up. When he went to a summer football camp, Gaziano saw it as an opportunity to meet new friends.

But that was until his competitive juices started to kick in.

“I was like ‘Okay, these are the biggest and baddest in the state, how do I stack up? How can I compete?” Gaziano said. “Early in my career, (I was) just kinda thinking like ‘How can I get on the field? How can I become a starter my sophomore year?”

His production on the field answered his questions pretty quickly. He excelled as a sophomore and started receiving scholarship offers as a junior, committing to Northwestern in the spring over offers from Boston College, Rutgers and Syracuse.

By his senior season, he won the 2014 Massachusetts Gatorade Player of the Year and helped his team to an undefeated state championship run.

So what made him choose the Cats?

When deciding where to attend college, Gaziano imagined his future. In fact, he predicted it.

During his junior year, he took an unofficial visit to Evanston to tour the campus. It wasn’t the location that swayed his decision, it wasn’t Coach Fitzgerald — although that was a part of it. Instead, it was the people, specifically the other recruits on the visit with him.

“On that visit, I thought, ‘Wow, these are the guys I want to be around for five years in the locker room,’” Gaziano said. “I could see myself in 40 years going to meet up on a golf course and being friends for a long time.”

He verbally committed a month later and Gaziano signed his letter of intent on Feb. 4, 2015 to play football for NU.

As for those recruits he met on his spring visit? They turned out to be J.B. Butler, Blake Hance and Blake Oxley, Gaziano’s eventual freshman year roommates.

Despite being a highly-touted recruit, Gaziano only played one game as a freshman before redshirting. He used the year to get stronger and learn as much as he could in order to help the team.

“Even though I wasn’t playing on Saturday, Tuesday practice and Wednesday practice, that was like my gameday,” Gaziano said. “So I was going out and I was going as hard as I could to try to give the scout team, our offense (and) Clayton (Thorson) a great look.”

It also helped that he was playing behind three defensive linemen who eventually found their way to the NFL. Ahead of Gaziano on the depth chart were Dean Lowry, Ifeadi Odenigbo and Deonte Gibson, who all worked their way into the NFL.

Gaziano described learning from two different styles of leadership. On one hand, Lowry and Odenigbo led by example, often speaking very little, but saying a lot through their work ethic. Gibson, on the other hand, was a vocal leader, willing to tell a young Gaziano when his technique was wrong or his hands were in the incorrect position.

“I thought I knew a lot about football. I didn’t know anything about football,” Gaziano said. “(Gibson) was kinda like, ‘Okay, you don’t know a lot. That’s okay. There’s time to learn.’ He was encouraging in the way I was able to grow as a player in my first year… it was good to have that kind of balance.”

One of Gaziano’s favorite collegiate plays came last year during the Holiday Bowl. Rain poured down through the game, leading to sloppy field conditions. In the third quarter, Utah was driving deep into the Cats territory with a chance to put the game further out of reach.

“They don’t show it on the highlight film, but this is kinda how I remember the play is: I got off and I slipped and fell right on my face,” Gaziano said. “Luckily, I got up and made a nice move around the edge and was able to knock the ball out.”

Gaziano strip sacked Utah’s Jason Shelley, shifting the momentum of the game — safety Jared McGee picked it up and ran it all the way back for a touchdown as the Cats went on to score their second of four touchdowns in the quarter.

But to have as much success as Gaziano has had, it’s about more than just luck — the senior defensive end has been as consistent as they come throughout his NU career. After 4.5 sacks as a freshman, he doubled his sack total as a sophomore and has 14 more in his last two seasons.

Gaziano has been a model of consistency for a defensive line with loads of depth. The senior defensive lineman has tried to be a mentor for the younger guys, specifically sophomore Trevor Kent, junior Samdup Miller and junior Earnest Brown IV.

Like Lowry and Odenigbo, Gaziano said he tends to lead by example and not with his words. But his impact can be felt by everyone on the defensive line.

“Definitely one of our leaders. Definitely a guy that will help you with any questions you have,” freshman defensive end Adetomiwa Adebawore said. “A guy that’s very knowledgeable, understands the game pretty well. He’s just always helping, not only on the field but in the classroom. If we have any questions, he’s always there.”

Of the accomplishments this senior class has been a part of, this season has certainly not the one that any on this Cats’ roster, let alone the seniors, expected to have.

Still, Gaziano’s five years have been full of great moments he will be able to recall 30 years from now: the overtime win at home against Iowa in 2017, Nate Hall’s interception in triple-overtime against Michigan State and, of course, the trip to the Big Ten Championship.

NU had been to four straight bowls and had won three straight until this year. So, needless to say, this season has been a disappointment by any standard. However, Gaziano doesn’t believe this season exemplifies a drop off for this program and it certainly doesn’t define his career.

“It was an anomaly,” Gaziano said about this season. “You can’t look at that and say that was what defined your career. You have to look at the whole and say, we put in a ton of work and the body of work is impressive.”

Gaziano has helped establish a standard that makes a 2-8 season like this year an oddity. The last losing season NU had was when he was a senior in high school and the Cats went 5-7.

Instead of looking at this one season, Gaziano believes that recruits who were in a similar position as him should look at the program’s long term success and recognize that, sometimes, hiccups happen.

While he won’t be with the program next year, Gaziano knows he’s leaving a program headed in the right direction.

“You can’t shy away from the fact that we’ve had success in the past and this program is on the rise,” Gaziano said. “You can’t look at one small subset of games or one season and look at that in the long run and deter you from the fact that Northwestern does it the right way.”

On Saturday, Gaziano will run onto Ryan Field for one final time in an NU uniform, and the sack record literally within reach. Last week, he had a couple of chances to break the record against UMass — the first team to give him an offer — but just missed.

Although etching his name in the history books is a plausible possibility, Gaziano won’t have his mind on it. Instead, he will have his mind set on beating No. 10 Minnesota. Football has never been about himself. For Gaziano, it’s been about making timely plays to help his team win.

So no, Gaziano won’t get the storybook ending he probably envisioned. He won’t play in a bowl game. He won’t have a chance to play in another Big Ten Championship Game. But he will continue to battle until he can’t anymore — and that’s what has made him a NU football legend.

“We have two really important games, I’m going to try to do as much as I can to win these games,” Gaziano said. “And if it happens to be that, you know, I help the team out by getting a sack, then definitely gonna celebrate that a little extra than all the others.”