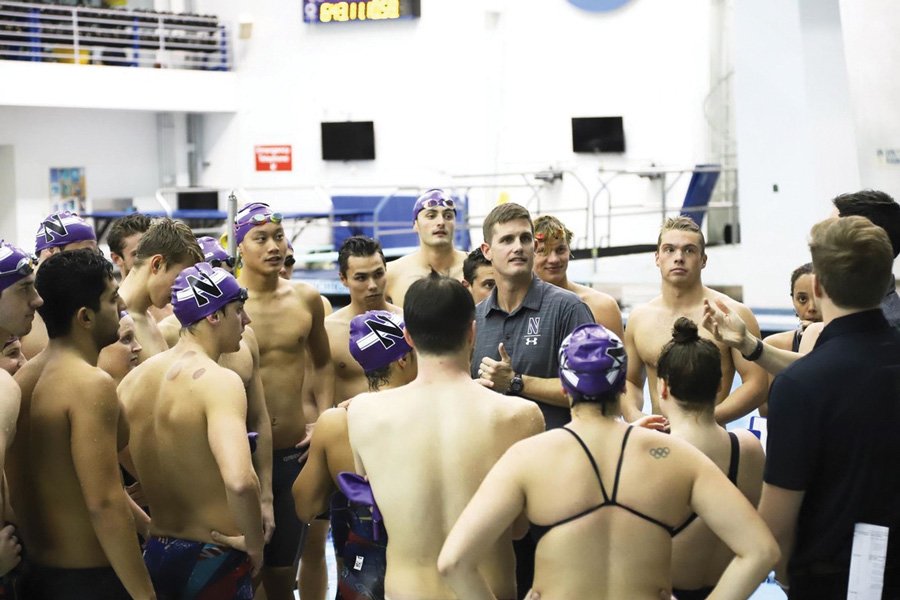 Jeremy Kipp talks to his team. Northwestern’s second year coach has taken a long journey to success with the Wildcats. (Source: Northwestern Athletics)

Jeremy Kipp talks to his team. Northwestern’s second year coach has taken a long journey to success with the Wildcats.

Jeremy Kipp’s coaching philosophy stems from a book he requires all of his recruits to read.

The summer before they enroll, Kipp assigns all Northwestern swimmers “The Energy Bus” by Jon Gordon, which he described as “a simple allegory.”

“The point of the allegory is you’re really the master of your fate, you’re the one driving the bus,” Kipp said. “That’s one of the things we’ve tried to instill in the kids, they’re the drivers of this bus.”

It’s also something Kipp tries to instill in himself. Kipp was hired at Northwestern to combine the men’s and women’s programs in 2018. Now in his second season with the Wildcats, he has his mind set on taking NU back to national prominence.

His athletes read “The Energy Bus” at USC, where he was an assistant coach for eight years, and at his first head coaching stop at Boise State, where he led the Broncos’ women’s-only program for three years.

Several swimmers have noticed immediate, positive change in the culture and energy of the team. While much of that comes from having more people on the pool deck after combining genders, multiple Cats were quick to attribute the change to Kipp and his staff as well.

“His resume was obviously really impressive,” junior DJ Hwang said. “The way he brings energy on deck, the way he brings the team together really shows. We’re happy to have him on board.”

From Southern California to Idaho and now to Evanston, Kipp has been driving the bus for his team. But Kipp’s winding road began on the East Coast, in a working-class suburb south of Philadelphia.

Kipp was raised by a single mother as the middle of three children, in “a world as far away from Northwestern as you can really get.” His mother drove a bus for a local school and was a stay-at-home parent before landing a job in sales at an aeronautical engineering company. But that didn’t stop her from waking up before dawn to help her son prepare to deliver newspapers.

Kipp said his mother’s work ethic rubbed off on him, in swimming and in life. He spent his summers on the swim team at the local recreation center, then began swimming year-round as a teenager.

He went on to swim collegiately at Division II Bloomsburg University in Bloomsburg, Pennsylvania, serving as captain his final two years before graduating in 1999 with a degree in English. He thought he was done with swimming and set out to become a fireman.

Instead, he got a coaching job right out of college as an assistant at UC Santa Barbara.

“If you’re a kid from Philly and you’ve never been to Santa Barbara, it’s amazing,” Kipp said. “The guy who was coaching with me offered me a job. I thought I was going to be a fireman, to be honest. He talked me out of that, (saying) ‘you’re a born coach, you should be coaching.’”

Kipp stayed in Santa Barbara for eight years before accepting a position as an assistant coach at USC, a national power on both the men’s and women’s sides. One of the Trojans’ top swimmers from his time in Los Angeles was Meghan Hawthorne, who went on to work for Kipp as an assistant in Boise and at NU.

Hawthorne was a two-time all-American at USC and competed for the U.S. national team from 2012-2014. The Trojan women finished in the top 10 at the NCAA Championships every year of her career.

When Kipp finally got his first head coaching opportunity at Boise State in 2015, he wanted to bring Hawthorne with him. The only challenge was convincing Hawthorne, who had never lived outside the Los Angeles area, to follow him up to Idaho.

“I was driving, sitting on the 405, and Jeremy called me,” Hawthorne said. “I had been in traffic for about an hour. He’s like ‘I just got the head coaching position at Boise State.’ I’m like, ‘this is great, but what does it have to do with me?’ He’s like, ‘I’m looking for someone who’s enthusiastic, excited, do you know anybody?’ And I’m like, ‘I can’t think of anybody off the top of my head,’ and he goes, ‘Hawthorne, I’m talking about you.’”

Hawthorne did not need much persuading. Five hours after she got off the phone with Kipp, she accepted the offer. Five days later, she had packed up her entire life and moved to Boise, a city where she did not know a single person other than her boss.

The Broncos were already among the country’s strongest mid-major programs when Kipp took over, and he kept it that way, winning Mountain West championships in 2017 and 2018.

“It was the best decision I ever made,” Hawthorne said. “I take Jeremy’s decision to heart, I take it seriously. He’s not playing around if he tells me that Boise is a beautiful place, that I’d be able to be part of a really incredible team there.”

Kipp had interviewed for the women’s head coaching position at NU just before being hired in Boise, but the Cats went with alumna Abby Steketee instead. But when Steketee and men’s coach Jarod Schroeder both resigned in April 2018, much of the swimming world assumed — correctly, as it turned out — that NU would combine genders for their program.

The opportunity was too good to pass up for Kipp, who began reaching out to anyone he knew in the North Shore area. When Kipp got the job, he got back on the bus and traveled east.

But Kipp knew he was headed into a challenge. While USC and Boise State were both strong programs when he came in, the Cats were in a different place. The men had finished second to last at Big Ten Championships for the past several years, while the women were right in the middle of the pack.

“Every head coach, you have to have an ego,” Kipp said. “I think I can overcome that problem, I can overcome those things. You can outcoach or outrecruit. I got really excited about the opportunity.”

Kipp immediately went to work assembling a strong coaching staff. He brought Hawthorne along again and added Jake Tapp, a former Olympian and world record holder, and Katie Robinson, who had previously been the women’s head coach at Tulane.

Junior Sophie Angus said the new staff made the transition as easy as possible.

“We had a lot of uncertainty with where the program was going, what was going to happen,” Angus said. “But the minute we started meeting, all that talk dropped, and we really connected with them right away.”

NU’s practices have been demanding, especially in terms of weight training, but Kipp knows the Cats need to have fun, too. He understands the pressure his student-athletes are under and said swimming can be a respite from academic stress.

Kipp has already built up plenty of momentum in recruiting — six current freshmen have competed on the international stage. And he’s starting to see some success in the pool as well, most notably when the men won their first Big Ten dual meet in nearly six years earlier this month.

He’s preaching positivity all the way, always behind the wheel of the team’s energy bus.

“It’s been really fun to be on this journey with him,” Hawthorne said. “I think I speak for the whole staff when I say we’re really honored to be seen on the pool deck with him and going on this journey on the bus, and hoping it’s going in the right direction, which we know it is.”