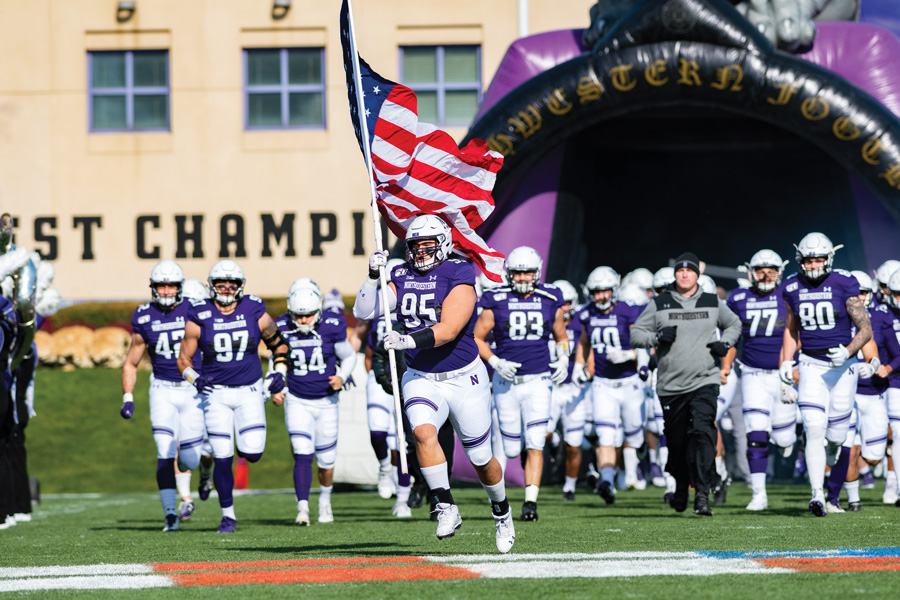 Alex Miller leads NU onto the field. The senior defensive lineman plays alongside his brother Samdup.

So they matched brothers Joe and Chris Bergin against each other in sprints, conditioning and agility drills — three weeks in a row.

“When I told him we were going against each other, he just didn’t even respond to me, looked away, we didn’t make eye contact the rest of the day,” said Chris Bergin, a junior linebacker and the younger of the two. “He was just so locked in and ready to go, and it was so much fun. It was exhausting. Every rep, we were contesting. It was probably the most fun I’ve had in winter workouts. Iron sharpens iron, and we just love making each other better.”

The Bergins, both walk-ons from Bloomfield Hills, Michigan, took circuitous routes to success with the Wildcats. Joe, a fifth-year senior defensive back, had no scholarship offers out of Detroit Country Day School, though he was considered by a few Ivy League schools, which are not allowed to give athletic scholarships.

There was somewhat more interest in Chris — he visited Navy, Air Force, Harvard and Princeton, and Joe said some Mid-American Conference schools looked at him — but after he visited Joe in Evanston, he said he immediately felt at home.

“It was literally love at first sight,” Chris said. “I woke up with him to go to the 5:45 workout that Friday morning and I was like ‘this is home.’ Everyone felt like a brother instantly, and it was like no other place I’d been. I was like, I would cut my left arm off to be a part of this program.”

Their careers have taken considerably different paths since arriving at NU. Joe redshirted in 2015 and has played almost exclusively on special teams. Chris was mainly a special teams player as well as a freshman in 2017, but an injury to linebacker Nate Hall early in 2018 forced him to take on a bigger role.

Chris’ first career start was a memorable one — it came on Oct. 6, 2018 at the home of his father’s alma mater, Michigan State. Joe Bergin Sr. was a starting defensive lineman on the 1987 Spartans team that won the Big Ten and defeated USC in the Rose Bowl.

Despite the ties, Michigan State did not recruit either of Joe Sr.’s two oldest sons, and Chris showed the Spartans what they were missing that day by making eight tackles and registering a quarterback hit as the Cats posted a 29-19 win.

“It’s really like your dream becoming real, and you have to take it all in but you also have to perform,” he said. “I was so nervous, but once I got out there, it was just playing football.”

But while Chris has been the better player, it was Joe who earned the program’s highest honor this year — the No. 1 jersey, which coach Pat Fitzgerald says is given to the player who “truly embodies the values and character of the Northwestern football family.”

Joe said being a walk-on gave him a strong work ethic and a chip on his shoulder, and he constantly tried to outwork his teammates in practice.

And that drive extends to facing his brother in winter workouts. Joe said being the older brother gives him added pressure to beat Chris in the drills.

“Oh, hell yeah. I have to win,” Joe said. “Even if he is better than me at a drill, I just have to find a way to beat him. He’s got 20 pounds on me, but I still think I can take him. When you’re going against your little brother, there’s a certain mentality that needs to be switched on.”

So after two winters of competing in workouts, which Bergin came out ahead?

“If I’m being completely honest — this is not a lie — we tied,” Chris said. “A dead tie for reps. We had six stations, he won three and I won three.”

And a third Bergin may be joining NU next year. Joe said he and Chris have two younger brothers who also play football. Owen, a high school senior, is considering playing for the Cats. The youngest brother is still in middle school.

The Bergins are not alone in having multiple family members on the team — they are one of three sets of brothers on the 2019 Cats. Junior linebacker Blake Gallagher was joined this year by his younger brother, freshman linebacker Bryce Gallagher. And on the defensive line, senior Alex Miller and junior Samdup Miller each started every game until Samdup sustained a season-ending injury on Nov. 2 at Indiana.

Fitzgerald said there have been several other sets of brothers to play for NU during his tenure and he has appreciated maintaining connections with their families.

“It’s been pretty cool when I go into a house or the oldest brother takes an unofficial visit here, and the parents say ‘hey, don’t forget about his little brother,’ and I’m like, ‘alright, don’t forget about us,” Fitzgerald said. “As someone who did not have a brother, I am incredibly jealous of those guys because having a shared experience like this has to be absolutely unbelievable.”

Before getting hurt, Samdup Miller had started every game since he arrived on campus. He was named a freshman all-American by both ESPN and USA Today in 2017, when he led all Big Ten freshmen with 5.5 sacks.

Alex, meanwhile, was a backup for the last three years before starting alongside his brother in 2019. He has already set career highs in tackles, tackles for loss and sacks. His rise, however, coincided with a slight drop in production for Samdup, who had compiled just 2.5 tackles for loss and 0.5 sacks in eight games.

One of Fitzgerald’s most commonly-used sayings is “play for the brother to your left and right,” but when the Houston natives started together on the defensive line, the phrase took on a literal meaning. But with Samdup out, Alex is now playing for his brother — and roommate — on the sideline.

“Just seeing him in pain and not being able to sleep at night because he can’t sleep on the back of his shoulder,” Alex said. “It’s not a good feeling, but it just makes me more motivated and want to play better for him, because I know he would do everything possible for us to win if I was the one who was down.”

While the Bergins and the Millers are in their last year playing together, the Gallaghers, from Raynham, Massachusetts, are in their first.

Blake is in his second season as a starter and led the Big Ten in tackles a year ago with 127. He is currently in the midst of one of the best stretches of his career, making at least 10 tackles in three straight games before coming up with his second career interception last Saturday against Purdue.

Bryce, who was the first player in the current freshman class to verbally commit, has not seen the field much yet, but said having Blake around has helped him feel at home. He also said that although he has modeled his game after his brother somewhat, the Cats made it clear they were recruiting him as a separate person.

“I definitely try to be as physical as he is,” Bryce said. “He’s definitely had a huge impact on my growth since the first day I got here in the summer. He’s been huge in my development. Obviously he had a huge role in (my coming here), but I made the decision for myself as well.”

Both the Bergins and Millers have just three games left together, so they are trying to make the most of their remaining time as teammates.

“It really has not hit yet that we will not be playing together again,” Chris Bergin said. “I don’t really like thinking about it. I’m going to miss him more than anybody and it’s going to be pretty hard without him, because he’s always been my guide, my rock and just my person around here. He’s the best mentor and brother anyone could ever ask for.”