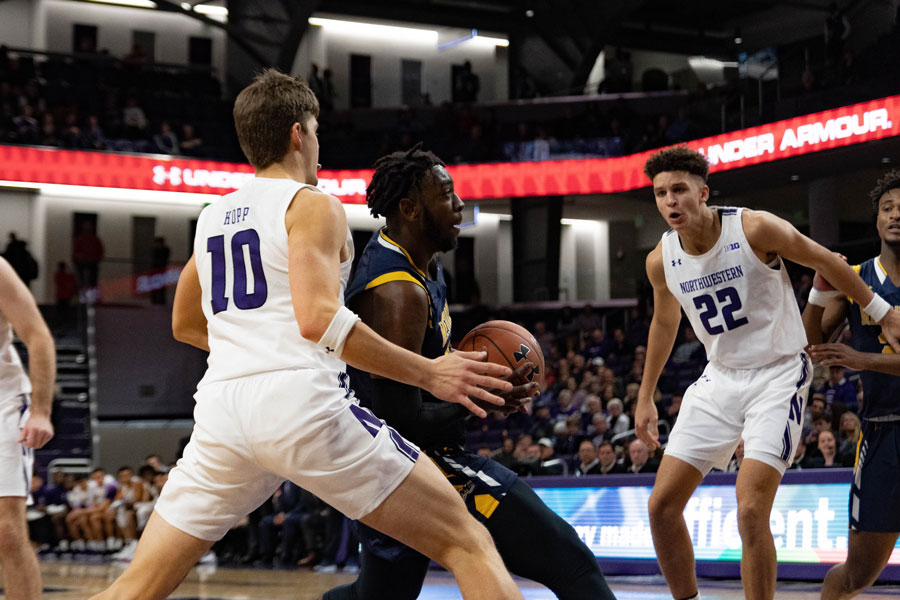 Playing its first season in Division I, Merrimack rebounded from a 20-point loss against Maine to beat Northwestern. (Alison Albeda/Daily Senior Staffer)

Playing its first season in Division I, Merrimack rebounded from a 20-point loss against Maine to beat Northwestern.

Before he walked into Merrimack’s locker room at the end of the game, head coach Joe Gallo raised his fist like he’d just won the national championship. His players were all waiting for him on the other side of the door, looking for a cooler or a cup or anything that could hold water. They wanted to douse him and celebrate the school’s first Division I win.

As he turned the door-handle, Gallo smiled, well aware that he was about to walk into pure chaos. Then he burst into the room and screamed at the top of his lungs.

It was the kind of night that no one could have imagined, one that might put this program on the map — or at least be brought up in every recruiting trip Gallo goes on after this. Playing its first season in Division I, Merrimack beat Northwestern at Welsh-Ryan Arena 71-61 for its first win.

Two days before the upset and ensuing celebration, Merrimack didn’t look like a team that could play at this level. When the Warriors made their debut, they lost by 20 points to a Maine team that won five games last year.

Merrimack entered as 18.5-point underdogs. No men’s college team had overcome that big a spread since UMBC beat Virginia in the 2018 NCAA Tournament.

When the Warriors walked into the arena, they were in awe of the Wildcats’ facility and intimidated by the size of the Northwestern front-line. When they left the arena, they had conquered it. They walked out dancing and hugging the dozen fans who had made the trip to see a 10-point win in Evanston. Seven months ago, the Warriors were a Division II team. No one would have blamed them if they broke out the champagne after the win.

“There was a championship atmosphere in here,” senior guard Juvaris Hayes said. “This is like the closest thing we’re going to get to competing as far as the postseason, so we’re just going to enjoy every moment of this victory.”

Merrimack didn’t even know that it would get to play Northwestern until most NCAA teams had filled their schedules. Late in the process, the Wildcats still had an open slot. Since Merrimack was new to Division I and couldn’t organize its schedule as far in advance as other low-major teams, it had plenty of available dates.

Eventually, the two schools settled on playing November 8, a date that will be remembered as long as Merrimack exists.

Just getting to this game was a rollercoaster for the Warriors. They gave up 84 points to Maine, watching forward Andrew Fleming carve up Merrimack’s staple 2-3 zone defense and score 37 points. The Warriors’ 84-64 loss embarrassed Gallo, who challenged his players over the next 36 hours. He hoped the result wasn’t a sign of what the rest of the season would be like.

“It was almost like I didn’t know who that team was,” Gallo said. “I knew that wasn’t us, but it’s hard to relay that to these guys. I was hoping I didn’t see a bunch of deer in headlights because they saw us lose by 20 in our first division I game and think that’s who we were.”

Merrimack got back to Boston late Wednesday night, but early Thursday morning Gallo called an “air-it-out” film session. The players showed up to be criticized, as Gallo broke down every one of Maine’s scoring possessions and pointed to the player responsible for allowing the basket.

“I asked them, ‘was that because they had a really good player, or someone better than us? Or what it a breakdown on us?’” Gallo said. “And 80 percent of the things were correctable, were things that were totally on us.”

“They had a kid that had 37 points on us, good player. Twenty of those 37 were a layup you or I could have made.”

Gallo was so busy picking apart Merrimack’s poor defensive performance that he didn’t watch any Northwestern film until he got on the bus to the airport Thursday at 12:15 a.m. Even though he only knew of a few of Northwestern’s players, Gallo told the team in that meeting that they could at least compete with the Wildcats. But mostly, he was excited for his players to “get a taste of Big Ten life.”

“This is huge, to be honest,” Gallo said the day before the game. “These games are a great opportunity for them to play against guys they watch on TV and read about. They can really see where they stack up.”

The first thing Merrimack forward Devin Jensen noticed when he walked into Welsh-Ryan Arena was the space behind the basket. In Merrimack’s arena, the hoop is a few feet in front of a wall. At Welsh-Ryan, there’s an entire student section and a second-level overhang.

“This gym is like completely different from what we’ve ever played in,” said Jensen, a 6-foot-5 stretch four.

It took a little while for Jensen to adjust to the backdrop. He took more shots at morning shoot around than usual, trying to correct his depth perception so he wouldn’t look bad in his first game against a power conference team. Jensen’s mother had made the trip to Evanston, so he knew he didn’t want to air-ball anything.

Hayes could tell he looked nervous. So he walked over a struck a conversation

“And I was like, ‘no, we gonna get you six threes tonight.’”

Then the conversation ended. Jensen had never scored more than ten points in three years with the team. Why would this night be any different?

A few hours later, when Merrimack took the floor for pregame warmups and fans started to file in, Gallo said he noticed his players looking up at the scoreboard and the lights. To get more comfortable, the Warriors skipped the typical pre-game locker room talk. They spent the final 30 minutes before the game going through layup lines and putting up shots.

Before the game started, Gallo pulled aside Hayes. Gallo told his best player –– a two-time Division II All American –– that he would be the most poised guy on the court.

“I told Juvaris that this isn’t that big of a deal,” Gallo said. “I don’t care which Division you were playing in last year. We won more games each of the last three years than anyone on (Northwestern’s) roster combined.”

After all that talk, the game tipped off and Merrimack played just like the team did against Maine. The Warriors committed two shooting fouls on Wildcats forward Miller Kopp in the first two minutes. Jensen was aggressive like Hayes had asked him to be, but he missed his first two threes and Merrimack trailed 8-0 early.

Jensen spent the rest of the game making sure he kept that promise. He got the Warriors on the board with a transition three almost four minutes into the game. Jensen went on to have the best game of his career, scoring 23 points and making seven shots from beyond the arc.

Both times it looked like NU would pull away early in the second half, Jensen cut that out. When the Cats came out of halftime strong and quickly turned a one-point deficit into a four-point lead, Jensen hit a contested three. Two minutes later, he hit another one that tied the score at 46. That shot was when Gallo became fully convinced that this would be a close game.

“It took until about the second media of the second half,” Gallo said. “That’s when I told them it was a basketball game, and they all knew.”

Twelve minutes of game-time later, Merrimack was on top of the world. Jensen’s shooting had such an effect on the Wildcats’ that Collins switched his best defender –– guard Anthony Gaines –– onto him. That opened up the floor for Hayes, who scored 17 points after halftime. He iced the win by making eight free throws in the last two minutes. It was the biggest college basketball upset in the last 20 months.

After post-game handshakes, the Merrimack guys sprinted to the locker room. “Get the water cooler,” one of them shouted. Gallo was the last one in. He hugged or shook the hand of every gathered fan wearing Merrimack colors, including some parents, friends and alumni.

Finally, Gallo was done with that and ready to really celebrate. He flung open the door and reminded with what’s possible with those three words: I told you.

Then he entered a mosh pit of sweaty, overexcited players who just won the game of their lives. He wanted to dance like Roy Williams. But he couldn’t dance. “It was kind of too tight,” Gallo said. “I need a little room for my moonwalk.” The players never found that water cooler. Hayes says a Gatorade bath will come sometime soon.

This was that big of a win for Merrimack. The time they got their first Division I victory.