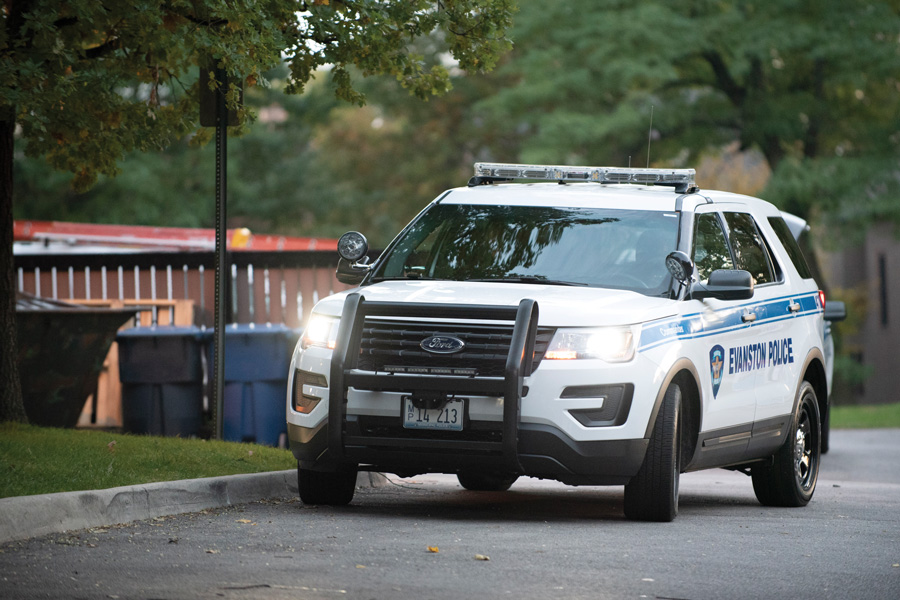 “I like to use the term ‘double standard,’” Sutton said. “As a black man in this community, I’ve seen both sides of it.”

A member of the Citizens Network of Protection — a group dedicated to police reform and civilian oversight — Sutton said he’s tried to work “in the system” for marginalized groups. He’s among many residents in the city demanding civilian oversight of the Evanston Police Department.

At an Oct. 28 meeting, City Council voted to introduce an ordinance that would create a formalized commission to address complaints. The new commission would provide transparency in the complaint process, Deputy City Manager Kimberly Richardson said.

The commission aims “to promote public confidence in the professionalism and accountability” of EPD through unbiased review of complaints and policy recommendations, according to city documents. The ordinance also specifies how the commission would incorporate a “citizen perspective” in evaluating complaints and seek to provide a systematic means to citizen and police interactions.

EPD said they are not prepared to comment on the ordinance at this time.

Despite their consistent advocacy, Sutton said he and other members of the CNP feel the city has largely ignored their demands in constructing the ordinance.

“We’re being asked to accept something that’s politically expedient rather than something that would resolve issues in the community,” Sutton said. “This proposal is a Band-Aid, and we have been diagnosed with skin cancer.”

However, a significant barrier to achieving the powers of a civilian oversight board the CNP would like lies in restrictive state law.

As of 2015, Illinois is one of 15 states that have enacted legislation to codify a version of a Law Enforcement Officers’ Bill of Rights, a law that grants police special protections in criminal prosecutions and other investigations.

Under the ordinance, the nine member commission would review the EPD’s internal investigation and evaluate its objectivity and fairness, among other factors, through watching videos, including body-cam footage, in closed sessions. But ultimately, the police chief and city manager have the authority to decide if there will be discipline for the officer in question, in accordance with state law.

The ordinance for the commission specifies that “pursuant to the Collective Bargaining Agreement, only the police chief and the city manager are empowered to impose discipline.” The city’s collective bargaining agreement with the Fraternal Order of Police Union provides that the city can “hire, promote, demote, suspend, discipline or discharge” police for a just cause.

Sutton said the FOP sufficiently protects police officers in the community, but citizens are not entitled to the same opportunity to voice their concerns and understand key decisions that affect their communities.

“When we look at the statistics, who’s being adversely affected in this community? Poor, black citizens,” Sutton said. “Not one item of that proposal addresses the concerns of the person who are adversely affected.”

Richardson said Police Chief Demitrious Cook has the final say in the complaints process and must balance making sure policies and procedures align with where the city is as an organization culturally and state statute.

She said the ordinance is not perfect and understands why the CNP is demanding for more.

“I understand where their frustration is,” Richardson said. “They’re looking for more civilian input, civilian say in the policy, civilians being a part of it. It’s just that unlike other states, Illinois has a very strong statute that does protect (police officers).”

Austin Spillar, a member of CNP, said the group does not want a civilian oversight board “where the police are still allowed to investigate the police.” In situations where the department investigates its own officers, investigations might not be thorough, he said.

“We know that there’s a code of silence, what they call the ‘thin blue line,’” Spillar said. “It’s not set up to provide equity for the complainant.”

As a whole, Spillar said the proposed civilian oversight board has no power. The CNP advocates for the board to have subpoena power to compel police officers to testify and include witnesses.

“When you look at their powers and duties, (the proposed board) reviews the internal investigation, to make sure it’s complete thorough, objective and fair,” Spillar said. “But basically, they’re going to read a copy of the complaint, a transcript of the interviews and any final reports prepared by the Office of Professional Standards.”

Spillar said these reports may be drafted to omit or downplay certain facts, portraying EPD in a better light. If the board determines an investigation was inadequate, there’s no way for them to follow up, he said.

The commission can give recommendations for course of action, but the police chief would ultimately decide if the implementation of policy change is needed, Richardson said.

“If this board says a police officer should be disciplined, but then the police chief decides another way, there’s nothing in this ordinance that would compel a police chief to give a reason why,” Spillar said. “That’s a lack of transparency.”

While the language of the ordinance specifies that the city prioritizes “proactively” addressing issues of citizen complaints against police officers, Spillar said the committee serves an advisory and review role, without the ability to take action.

For Spillar, a proactive board would look at police department data and find officers who are stepping out of line or policies that lead to disparate treatment. The board would then call out racial disparities and provide policy recommendations on their findings, Spillar said.

“Currently the way this ordinance is written, there’s really no mandate to tackle structural racism that is inherent in all police departments,” Spillar said. “It is the founding mission of the police to be slave catchers, to protect property owners. To some extent, that’s still policing today.”

The CNP is also concerned about the board’s lack of community outreach to inform residents how to file complaints and publicize the process.

“Their fear now was that they were also now being this secondary arm that should be delegated to another group or a different body,” Richardson said.

Richardson said the commission is not based around community engagement. The objective for the committee, she said, is to be “as unbiased as possible,” with the role of strictly reviewing complaints and making sure the process is transparent.

But for the CNP, an unbiased committee that reviews complaints is not enough. They are demanding more action and community involvement. Sutton said many of the problems with police have come from administrative decisions and policies.

“My main concern is, this proposal is coming from the same group of people that have allowed a double standard to exist in this community for over a period of years,” Sutton said. “When we asked for equity, when we asked for an opportunity to be heard, we get marginalization and rejection.”