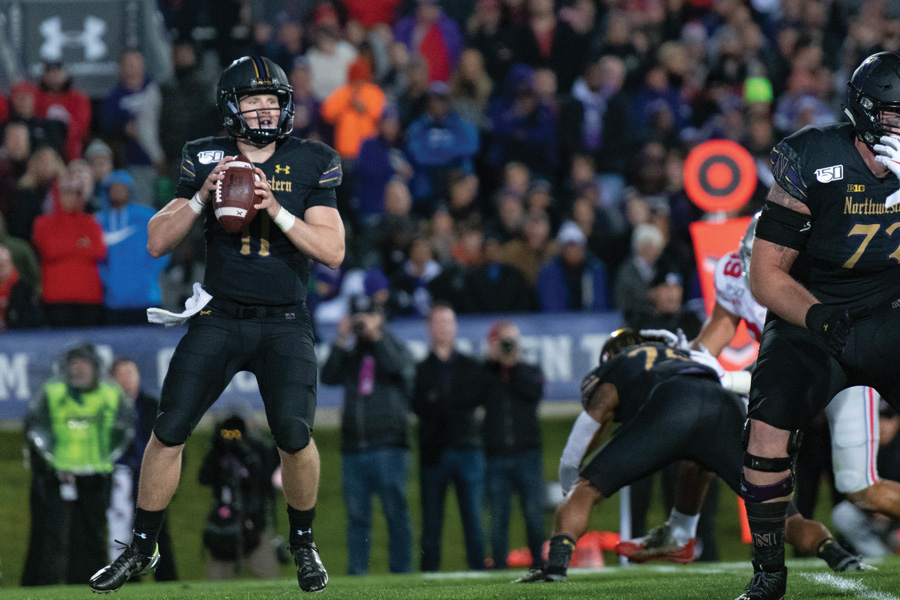 Aidan Smith looks downfield for a receiver against Ohio State. Smith threw for just 42 yards in the game.

Aidan Smith heard his name shouted from across the sideline and didn’t know how to react. It was late in the third quarter and he was watching Northwestern’s eventual 31-10 loss to Michigan State on Sept. 21. With his team down 21 points late in the third quarter, he had no idea his number was about to be called, that he’d become so highly scrutinized in the next month.

Just like that, McCall was giving Smith his first chance to prove himself. At the time, it wasn’t even established if he or Marty was the primary backup to sophomore Hunter Johnson.

Six weeks later, Smith is leading the offense. He’s initiating extra meetings with the wide receivers every night and the linemen multiple times a week, taking full responsibility of the team’s struggle to score.

Meanwhile, on-field and off-field factors have kept Johnson on the sideline, most notably Johnson’s mother’s recent battle with cancer, which was reported by the Chicago Tribune. At one point, coach Pat Fitzgerald “took football off his plate,” according to the Tribune, allowing Johnson to focus on his mother’s recovery.

Now, Johnson says he wants to play but McCall said the staff is still figuring out which quarterback gives the team the best chance to win.

“Hunter is available to play in games,” McCall said. “If you would ask Hunter about the situation now… he would be frustrated. But they all understand that we’re going to do the best thing for our football team.”

Over the last few weeks, the question of “Johnson OR Smith” has loomed over the unproductive offense. As the coaches still look for the quarterback who can give life to the seemingly lifeless offense, fans are clamoring for a solution. But Smith said the competition is a good thing.

“I like knowing I have to up my game to not be yanked out,” Smith said. “For some it makes them cower, but for others I enjoy that. That pushes me to play better, knowing if I mess up and am not on top of my game that opportunity’s going to get taken away from me.”

Smith gets his first snaps against MSU

After Marty got Smith’s attention and told him he’d be entering the game, Smith picked up the sideline telephone and spoke with McCall.

“Make the most out of your opportunity,” said the voice on the other end of the line.

A worn-down Johnson had taken enough hits on the day. NU’s deficit was big enough to give a chance to Smith, who started the season fourth on the depth chart. Smith says the coaches started taking him more seriously after he kept answering situational questions correctly in quarterback meetings. That led to more reps and eventually his first snaps of the season.

Then on his second pass attempt he threw an interception. Smith totaled 38 passing yards and completed just four of his 11 passes in just over a quarter of action. After the game, Smith spoke like a player who felt fortunate to be given a chance in garbage time.

“That was the first time I’ve been tackled in four years,” Smith said. “I (was) fortunate to be put in the backup position due to an unfortunate situation.”

The next game week was the last one Smith spent getting second-string reps in practice. His journey as a starter accelerated when he stepped in early in the fourth quarter against Wisconsin after Johnson took a vicious hit outside the pocket, injuring his knee.

With NU down 21 points, Smith played the best football the Cats have seen at the quarterback all season. He threw for 99 yards in the quarter and cut NU’s deficit to nine points before the Badgers won.

“I knew exactly what (the defenders) were doing, it was easy to tell,” Smith says now. “That game was still in reach if we put one or two scores on the board. I knew we were going to throw it around.

The next week, Smith named starter at the last minute

Even though Johnson was hurt and Smith had played so well the week prior, Smith wasn’t told he would start against Nebraska until 24 hours before kickoff.

Smith declined to specify what “X, Y and Z” means. But after the game, coach Pat Fitzgerald emphasized that Johnson’s knee wasn’t at full strength, and Johnson confirmed that to The Daily two weeks later.

Against the Cornhuskers, Smith nearly led NU to its only Big Ten win of the season. He took the Cats on a 58-yard touchdown drive to tie the score at 10 in the third quarter. Smith got the ball back with a chance to lead the team to victory with less than four minutes to go. On second-and-one from the Nebraska 48, Smith threw a slant to Ramaud Chiaokhiao-Bowman, who was hit before he could catch the ball. Nebraska intercepted the pass and scored a walk-off field goal two minutes later.

Smith says the missed pass interference call has stuck with him. If the call went the other way and NU won the game, Smith would have cemented a promising debut as QB1. It was a wild week for Smith, who played well on short notice.

“Considering that I was told on Friday I was going to start,” Smith said, “I think I managed that game really well.”

Smith steps up in first full week of game prep

Johnson told The Daily he was at full strength heading into the game against Ohio State, but Smith still went through a full week of preparation as the starter. That started Monday, October 14, when he says he texted a group chat that included himself and the receivers: “Hey, we’re going over stuff at 5 p.m. Be there.”

Ever since that text, Smith has been the one initiating film study for the offense. Junior left tackle Rashawn Slater said Smith has grown into the leader of the offense.

“Aidan never backs down, he wants to be consistent with his preparation,” he said. “He’s really taken ownership of the offense. The production hasn’t been there but the trust is there. He started the camp fourth on the depth chart, but now it’s him in the group chat saying we’re going to go over the protections.”

Before the game, McCall told Smith that he’d play the entire competitive portion of the game. He told him Johnson wouldn’t be receiving any snaps –– which, although unconfirmed, can likely be attributed to his family situation.

Smith was awful passing the ball in NU’s 52-3 loss, throwing for just 42 yards before being pulled late for Marty. After the game, Fitzgerald said it was his decision to not put Johnson in the game. Fitzgerald added he wanted to give Marty, a Cincinnati native, the opportunity to play against his state school.

It all gets worse against Iowa

The metaphor Saturday was right there –– Clayton Thorson being honored at midfield, followed by Aidan Smith leading NU to another scoreless drive in a 20-0 loss. The Cats haven’t been able to replace Thorson, and Smith hasn’t led the team to a win yet.

“(Smith) has taken a lot of heat like me, and rightly so,” McCall said. “He’s going through this. It’s a process, and sometimes you take some dips.”

Smith was again told he’d play the entire game. Then he made a bevy of mistakes –– some that were obvious in the moment and others that were even more glaring to the coaches when they saw them on film. Smith didn’t see several open receivers Saturday, and Fitzgerald’s biggest point of emphasis to him is that he’s been holding the ball too long. Further analysis backed up Fitzgerald’s initial analysis of Smith’s 138-yard, one-interception performance in a shutout loss.

“When you’re running a (basic) crossing route and the guy’s right in front of, just give him the ball,” Fitzgerald said Monday. “The (play) might be covered on the outside but there’s a guy right in front of us. Take the nickel. Take the five yards and let the guy go make a play. We had that multiple times on Saturday.”

Smith’s been trying to make the big play instead of checking down to closer open receivers, and Smith threw his sixth interception of the season. He said he’s started to realize that being a college quarterback is more difficult than he expected.

Who’s going to play against Indiana?

Even with seven games in the books, McCall says he doesn’t feel like the team has a better sense of what they have at quarterback than it did when the season started. He said Smith and Johnson have benefitted from the experience that comes with in-game situations, but he said they’ve played like they’ve been thrown “into the fire.”

The depth chart echoes McCall’s sentiment, with an “OR” between Smith and Johnson’s names. The coaches are waiting for someone to separate himself.

“Especially when we haven’t been doing the things on offense we want to do, everybody’s looking for an answer,” McCall said. “We’re trying to find that. (Johnson) may be one of those answers that we need, we’ll see how it goes. Everyday in practice is different, and we need to find out how consistent he is.”

No one has played a bigger role in that than Smith. He’s continued to initiate regular meetings with the rest of the offensive roster, staying optimistic as the Cats have one of their worst seasons in years.

But what about Johnson? The top rated quarterback in his high school class, Johnson transferred to NU with unrealistic expectations. Now, McCall said he isn’t sure when Johnson will be back on the field.

Smith said he sees this as an opportunity to solidify the starting job going forward. If he plays well enough, Smith said he’ll get the chance to lead the Cats into 2020.

But that’s for down the road. Right now, Smith just needs a win.