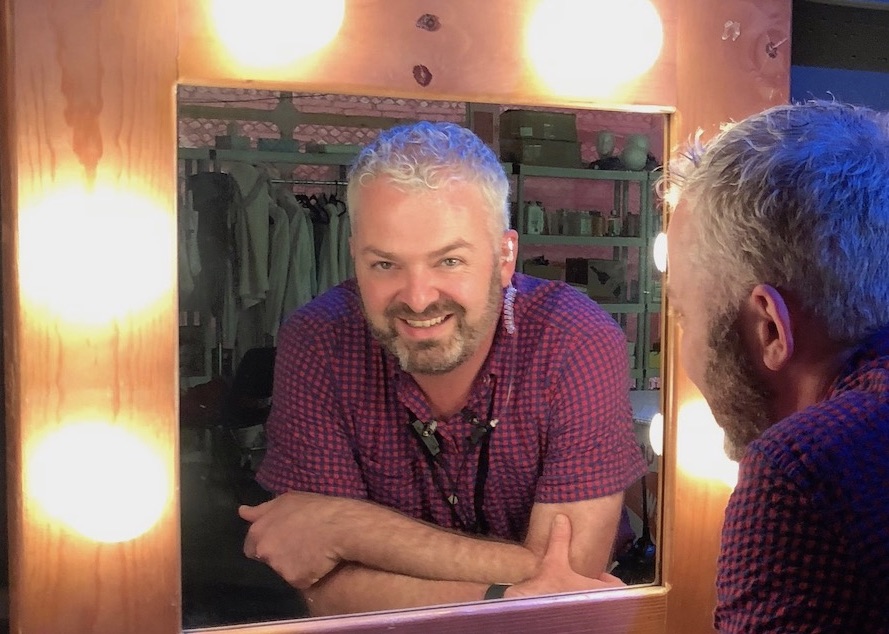 Bruce McCoy (Communication ’92) on the set of “RuPaul’s Drag Race.”

Bruce McCoy (Communication ’92) was a senior at Northwestern when he was first introduced to RuPaul. The drag queen and New York nightclub personality had just released his breakout single, “Supermodel (You Better Work),” which would go on to peak at No. 45 on the Billboard Hot 100 and No. 2 on the Dance charts.

Growing up during the ’80s AIDS epidemic, McCoy had been surrounded by negative stereotypes and messaging about gay people and was still working out his own identity. At a time where there were very few out queer stars, it was rare to find a celebrity who embraced gayness as unabashedly and as joyfully as RuPaul did. McCoy said from then on, RuPaul became one of his biggest role models.

“RuPaul was the first celebrity I had ever seen, growing up as a repressed gay kid in the ’80s, who was like ‘Wow being gay is fun. I am who I am and I’m proud of who I am and love me or don’t, but I’m fabulous,’” McCoy said. “And that’s still his message today, mind you.”

Now, over 20 years later, McCoy helps to spread his former role model and current friend’s message through the reality TV franchise and global phenomenon, “RuPaul’s Drag Race.” After joining the franchise in 2010 and serving in a variety of producing roles, McCoy currently serves as executive producer and showrunner of the franchise’s British expansion, “RuPaul’s Drag Race UK,” which premiered this October.

McCoy said he is proud of “Drag Race UK, and Britain’s reaction to the show made him realize the representation “Drag Race” provides has been taken for granted in America.

Since he was a kid, McCoy knew he wanted to work in the entertainment business, specifically in comedy. Growing up, he was a huge fan of “Saturday Night Live” and “SCTV,” and his dream job was to work on a sketch series where he could make fun of pop culture.

At Northwestern, he studied theater and invested much of his time into the Mee-Ow Show, where he fell into “the group of people that made fun of everybody else.” He met many of his lifetime friends through Mee-Ow, and he would go on to work with many of them in comedy groups when he moved to Los Angeles after graduation.

During his time in Evanston, he also took a performance studies class where they watched “Paris is Burning,” a seminal 1990 documentary about the drag ball culture of New York. This sparked his interest in drag queens that would eventually lead to his career on “Drag Race.”

After graduation, McCoy spent a few years as a struggling actor. Eventually, in 1995, a friend helped him get a job as an assistant to the director for the late night sketch comedy show, “MADtv.” His career took off when he was promoted to writer and producer in 1999, and he stayed on the show until 2007.

At “MADtv,” McCoy mainly wrote skits satirizing current trends, such as parodies of music videos and commercials. During the 12 years he worked there, he grew as a sketch comedy writer and dropped acting to commit to writing and producing.

Daniele Gaither (Communication ’93) met McCoy during callbacks for the Mee-Ow show as a sophomore and would later work with him at “MADtv.” Gaither said McCoy was always “a laugh riot” and constantly came up with jokes and sketch ideas.

“He was always the person, walking into the room, you could tell he was funny,” Gaither said. “The way you could read his face, you could see that the gears were grinding.”

According to Gaither, McCoy had always been obsessed with the singer and Jackson family member La Toya Jackson. The two bonded over their shared love of her first album and attended a book signing together in college when she released her autobiography.

It’s this love for La Toya Jackson that helped McCoy connect with RuPaul, who shared the same admiration for the pop diva. During the late ’90s, McCoy –– on a whim –– sent RuPaul’s manager an email with edited clips of Jackson on late-night talk shows. The manager showed RuPaul the video, and the queen found it so funny that he called McCoy to hang out. From there, history was made. The two struck a friendship, and RuPaul later hired McCoy as a writer for “Drag Race.”

“That’s sort of one of those weirdo stories that, early in my career, I wouldn’t have told people,” McCoy said. “But to be honest, that weirdness is great. And it’s why me and RuPaul are friends, because I was willing to let him see my weirdness and laugh.”

After leaving “MADtv” in 2007, McCoy joined the Drag Race franchise in 2010 as consulting producer for the short-lived spinoff “RuPaul’s Drag U,” which featured queens giving normal women makeovers.

During “Drag U,” McCoy made one of his greatest contributions to the franchise: making a typo in a script and inadvertently coining the phrase “Condragulations.”

“It’ll be in the Oxford dictionary before you know it,” McCoy said, laughing.

The next year, McCoy joined the mainline “Drag Race” franchise as a consulting producer, and was eventually promoted to co-executive producer in 2017. McCoy had worked for reality TV before –– he had a three-month job writing jokes for the iconic Paris Hilton vehicle “The Simple Life.” But his involvement in that show was very hands off, whereas with Drag Race, he got a chance to work very closely with the queens he wrote sketches for.

McCoy said his objective while working on “Drag Race” is to do his best to help every queen shine as much as possible because he knows the show is a huge opportunity for every contestant.

Although he has his favorite queens, McCoy said every single one is incredibly talented and brings great energy to the show.

“Honest to God, I love them all and respect them all so much,” McCoy said. “They’re very stressed out, and making a TV show can be stressful, but we have a lot of fun and try to make the filming of the show as much of a joy as we can, so what you watch on your TV is fun.”

Last year, the production company of “Drag Race,” World of Wonder, struck a deal with the BBC to co-produce a British version of the show. McCoy, who had moved to London five years ago with his husband and had been splitting time between the city and Los Angeles, was chosen to executive produce and showrun the new iteration of the franchise.

McCoy said “Drag Race UK” has been the biggest achievement of his professional career. Although he was nervous to take on the responsibility of showrunning, he was able to hire great people to help out thanks to the brand’s popularity.

Sally Miles, who is the other executive producer of “Drag Race UK,” said McCoy is one of the best people she has ever worked with and he does a great job helping both the production crew and stars shine.

The two are a great pair: Miles said she handles the business side of the show while McCoy handles the artistic side.

McCoy said although “Drag Race UK” maintains the format of the original show, the different style of drag in Britain helps distinguish it and makes it worth watching for American viewers. Although the looks are just as polished as in the U.S., drag in the U.K. gets its roots from acts in pubs and is more rooted in comedy than the pageantry of American drag. Because of this, the U.K. version focuses more on comedy and skits.

McCoy also said the cultural differences between the two countries are very apparent. The queens frequently use British slang words and references, such as old quotes from the U.K “XFactor,” that are iconic to British queer culture.

Next year, “Drag Race” will expand further with “Canada’s Drag Race.” McCoy said he thinks the show is so easily translatable to other cultures because every country has some history with drag. The format and message of self-expression and acceptance can resonate with anyone, he said.

When reflecting on what he learned from his career, McCoy said he now understands the importance of staying true to your values and your interests, regardless of how unconventional or weird they might be.

“Stay weird and don’t suppress how weird you are. Go with your what your passions are,” McCoy said. “It’s better to be a niche hit than a mainstream flop.”