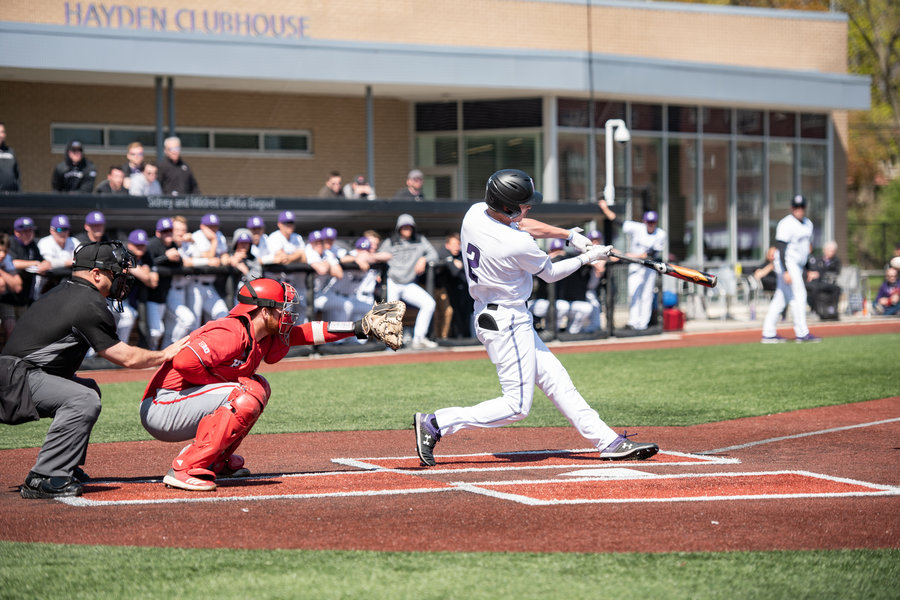 Jack Dunn swings. The Georgia native will go down as one of the best Wildcats of all time. ((Daily file photo by Evan Robinson-Johnson) )

Jack Dunn swings. The Georgia native will go down as one of the best Wildcats of all time.

What does it take to change a culture?

When Spencer Allen was hired as the head coach of Northwestern, he took over a program in need of revamping. To change a culture, he needed players to step up, become leaders and buy in.

For the past four seasons, Jack Dunn has done just that.

But when he first arrived in Evanston, becoming a Wildcat legend was far from a guarantee. The shortstop did have baseball in his blood — his father played at Georgia Tech, his uncle pitched at Northwestern in the 1980s and another uncle pitched for North Carolina. He came from an elite baseball program, Blessed Trinity Catholic High School in Georgia, where he was the starting shortstop for two state championship teams. But he was overshadowed by some of his teammates, most notably Cody Roberts, who was the Georgia 3A player of the year twice and was selected in the 11th Round of the MLB Draft last year.

Allen said he knew that Dunn was “solid” coming into college, and believed he would be a good player for the purple. But the Georgia native shattered those expectations.

“I’d be lying to say that I knew that he was going to be this type of leader, this type of teammate,” Allen said. “I could not have envisioned that.”

When Allen talks about Dunn, the first thing he mentions is his tireless drive. And for Dunn, that does not mean just grinding when people are watching. That means working hard all the time.

Tad Skelley saw the shortstop’s work ethic firsthand. The former volunteer assistant coach was the infield coach during Dunn’s first two seasons on campus. Skelley said he will never coach another kid like Dunn, and specifically highlighted his work ethic and leadership.

Nobody, he said, works harder.

“He’s always felt like every day he has to earn his role on the team and earned his teammates respect to be the starting shortstop,” Skelley said. “The kid’s never satisfied and he’s always getting better.”

Dunn has never gotten complacent, Skelley added, and is always looking to improve his game. That character trait is not as easy to find in a player as one might imagine.

Allen said what sets Dunn apart and is most impressive about the team leader was his passion to prepare. He said Dunn was enthusiastic every day of the week, and always wanted to win.

“I just try to show up ready to go everyday whether that’s practice, lift or game,” Dunn said. “I just try to come out here and perform my best.”

Dunn not only played in every single game NU has played in since he arrived on campus, he has started every single one — 211 in total. Over his final three seasons, he had less than four plate appearances in a game only seven times.

“Everyday, we know what we are going to get from Jack,” Allen said.

Skelley said no one has developed more than Dunn, and that development occurred in all aspects of his game.

During his first two seasons in Evanston, the Georgia native hit .245 with a .339 on-base percentage. The last two seasons, those two have risen to .327 and .417 while averaging 63 hits, 42.5 runs scored and 16 stolen bases. His strikeouts also decreased each season in college. Defensively, Dunn committed 26 errors across his freshman and sophomore seasons. Over the past two years, Dunn made only nine errors.

It all culminated in a career-year this past spring. Dunn hit .340 — fourth-best in the conference — with a .435 on-base percentage, 65 hits, 10 doubles and 36 RBIs from the leadoff spot. His season-long performance culminated with first team All-Big Ten honors at shortstop, the first time an NU shortstop was named to the first team since Jeremy Kurella in 2000.

“I’m a firm believer in ‘players make players,’” Allen said. “He turned himself into a guy that is going to have an opportunity to go play professionally. To me, it’s not just one story. It’s just his whole story.”

Dunn loves baseball. Everyone says it. Willie Bourbon, who played four seasons with Dunn in the infield, said his teammate is “all baseball.” Allen said he does not like to make comparisons between players, but said not everyone has his passion. That love gets illustrated in different ways.

It is seen in the way he approached summer baseball. For many, summer baseball is grueling and they hope the season ends as soon as possible. Dunn enjoyed his summer opportunities. He was a two-year starter for the Lakeshore Chinooks of the difficult Northwoods Leagues, and even was named MVP of the 2018 All-Star Game.

It is seen in his big hits — like his walk-off single against Iowa as a junior — and his web gems — like the inning-saving double play against Maryland in the 2017 Big Ten Tournament.

It is seen in his personality, which Allen called “infectious” and allowed him to become the leader of the ballclub.

It is seen in the smile he flashes every time he steps onto a ballfield, surrounded by his teammates.

“I made some of the best friends in my life,” Dunn said. “Every year, you come in and form a bond with all your teammates that if you’re not in that locker room, you don’t really understand.”

Dunn ended his career on a sour note, walking off the field at Miller Park following a heartbreaking loss to Minnesota that eliminated the Cats from Big Ten Tournament contention. The loss meant he would only head to the playoffs in one of his four seasons.

But Dunn’s legacy is not fully encapsulated in the stats. Allen called him someone who has “really changed our program.” A player with that type of impact does not just fade away into the history books. That type of player may never wear the purple and white ever again, but what he did for the program will be able to be seen in the players who will wear those colors in the future.

“I hope I led by example and guys understood what it takes to be an everyday guy in the Big Ten,” Dunn said. “If these guys come in next year and they are hungry and they get extra work in, get extra lifts in. If they have that mentality, that’s all I try to instill in those guys. You have to work until people take it away from you.”