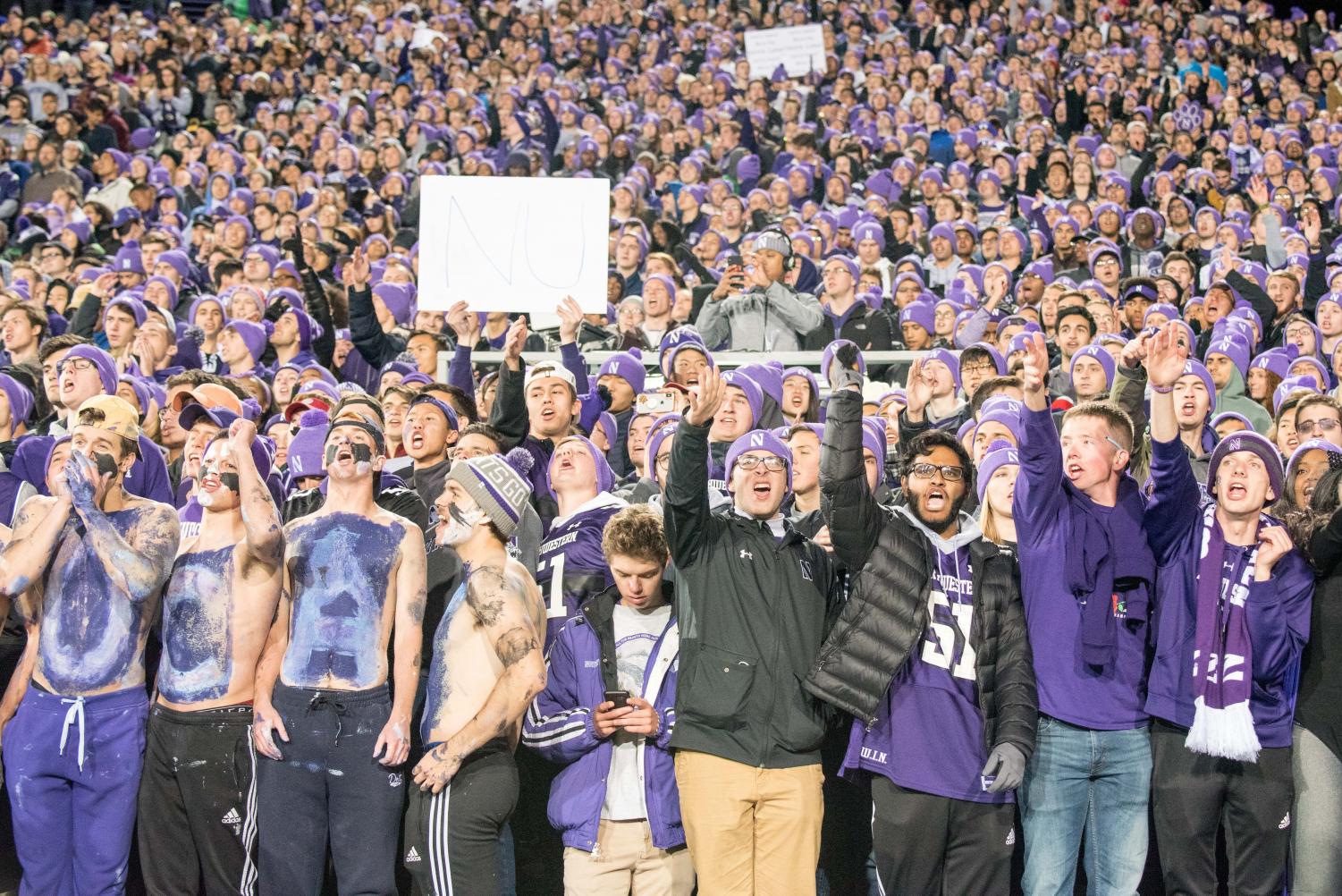 Each year, The Daily’s sports staff puts together a list of the best teams, athletes and moments from the past school year. This time around, voting for each category was made public, and more than 350 responses (on Twitter and a Google Form) later, the people have spoken. Read below for The Daily’s summary of the year that was in Northwestern sports.

Northwestern had one of its best seasons ever, finishing with a 39-5 record.The team earned a best-ever No. 2 ranking from CollegeFencing360, swept the weapon styles at the Midwest Fencing Conference championships and sent five fencers to the NCAA Championships.

NU plowed through tournaments during the regular season, starting with 16 straight team duals wins and finishing 10-4 against its fellow top-10 teams. Along with the impressive team accomplishments, the Cats held their first collegiate home meet at Ryan Fieldhouse in February.

Runner-up: Football (9-5 overall record, went undefeated in its division and made it to the Big Ten Championship Game for the first time ever, comeback win in the Holiday Bowl) 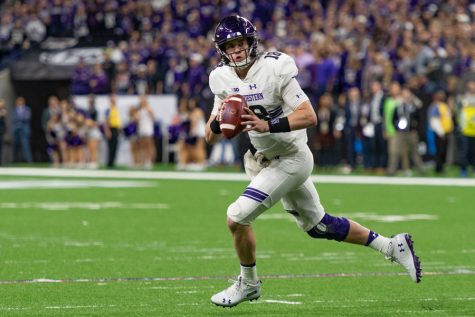 How to describe Clayton Thorson in one word?

Through four years and over 50 starts, Thorson was the face of Northwestern’s football program, and he leaves as by far the winningest quarterback in NU history. We don’t need to bore you with the details, but he holds almost every major NU passing record and was recently drafted in the fifth round by the Philadelphia Eagles.

Going into his senior year, though, we didn’t quite know what to expect from Thorson. He was coming off a devastating torn ACL sustained in the 2017 Music City Bowl win, and it wasn’t clear if he’d be ready for the season opener against Purdue.

There were also questions how much of a load Thorson would be able to take on without longtime backfield mate Justin Jackson.

He answered everything. He certainly wasn’t perfect, but every time NU needed a big play, Thorson was there. He put together maybe his best college performance to turn NU’s season around at Michigan State. He engineered a legendary 99-yard touchdown drive with two minutes remaining to stun Nebraska and keep the Wildcats’ Big Ten West hopes alive. He guided NU to its first-ever Big Ten Championship Game appearance.

Runner-up: Sebastian Rivera (took third place at NCAAs, Big Ten and Midlands champion, ranked No. 1 in his weight class starting in January and through end of the season) 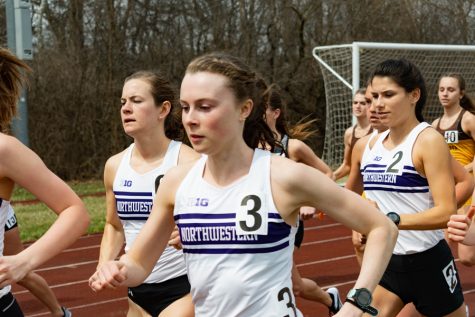 As the first cross country and indoor track All-American in program history, it’s not hard to see why Aubrey Roberts’ junior year campaign is deserving of recognition.

But what makes the Wisconsin native all the more impressive is the dominant path she’s taken to get here.

She was the top runner on the team in every cross country meet she ran in this fall, and became the first NU runner to land a Big Ten Athlete of the Week nod since 2013. Her second place finish at October’s Big Ten Championships led the Wildcats to a seventh-place finish — their best since 2012.

At December’s BU Season Opener, Roberts set a school record in the 5,000-meter race — by nearly 40 seconds. Her 15:32 performance became the fifth-best indoor 5K in Big Ten history — and the 27th best in the NCAAs.

It set the stage for her record-shattering to continue into the winter and spring. With her 4:52 mile in January, she ran NU’s third-fastest 1600m — and then ran 9 seconds faster a month later to take the school record. With the year coming to a close, Roberts also holds a program record in the 3K and the third-fastest 800m time in the school’s history. 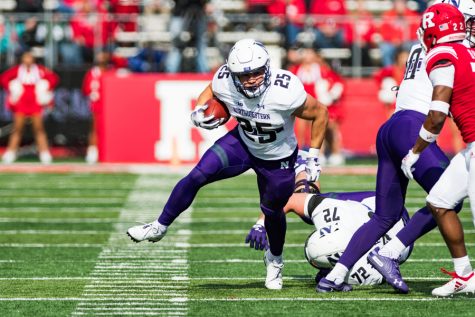 Isaiah Bowser began the 2018 season with the expectation that he’d redshirt. The running back took a combined two attempts in NU’s first four games, and it was assumed that the freshman from Sidney, Ohio would spend much of the season on the sideline as the more experienced Jeremy Larkin became the Cats’ primary ball carrier and John Moten worked as his backup.

That all changed when Larkin announced his medical retirement on September 24. NU floundered running the ball the next few games, trying to find his replacement, but on a cloudy day in Piscataway, New Jersey, Bowser shined.

That afternoon against Rutgers, Bowser burned his redshirt and ran for 108 yards on 24 carries. He earned the starting job, and finished the season with six touchdowns and 866 yards, the third-most rushing yards in a season by any freshman in program history.

Bowser ended the campaign eighth among all Big Ten running backs, and third among all freshman rushers.

Runner-up: David Nyfjall (named the Big Ten Freshman of the Year, had the lowest stroke average from any freshman in program history) 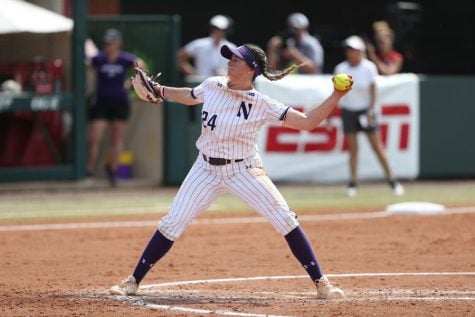 This comes as no surprise.

Danielle Williams won NFCA National Freshman of the Year on Tuesday. The freshman from Pleasanton, California was one of the best pitchers in the Big Ten, ranking second with a 1.55 ERA and 317 strikeouts and also taking home the Big Ten Freshman of the Year honor. Williams led the team with 31 wins, marking the second straight year that Northwestern’s wins leader was a freshman.

Williams’ dominant pitching performances led to the Wildcats’ first regional since 2008, and in the postseason, she stepped up for the team once again. In the Evanston Regional, she finished with a 1.22 ERA and pitching 13 of NU’s 14 innings in its Sunday elimination games. Even at the plate, Williams was one of the Cats’ best hitters. In the first regional game against Detroit Mercy, the freshman drove in three runs and hit a home run. In addition to winning National Freshman of the Year, she was also named a NFCA Third-Team All-American.

Runner-up: Clarissa Hand (started at No. 1 singles, upset the No. 7-ranked player in the nation, advanced to the second round of the NCAA Championships) 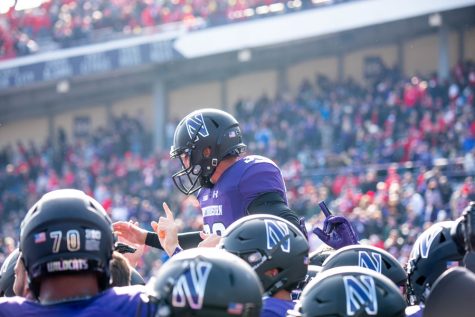 October 13’s Homecoming game between Northwestern and Nebraska had everything. A fumble return for a defensive lineman’s first-ever touchdown? Check. A 99-yard drive down the field in two minutes? Check. A touchdown with less than 15 seconds remaining to send it to overtime? Check. A walk-on kicker who hit the first three field goals of his career — including one in overtime — to win the game? Check.

The win proved to be one of the most important of the season. It was the only time the Cats would play in overtime in all of 2018 and started a streak that saw them win five of their next six and claim the Big Ten West crown for the first time ever.

Had that 99-yard drive not ended in a touchdown, or redshirt sophomore Drew Luckenbaugh’s overtime field goal attempt fallen short, the Cats’ 2018 campaign could have ended quite differently.

Run of the Year: Women’s Basketball to the WNIT (143 votes) 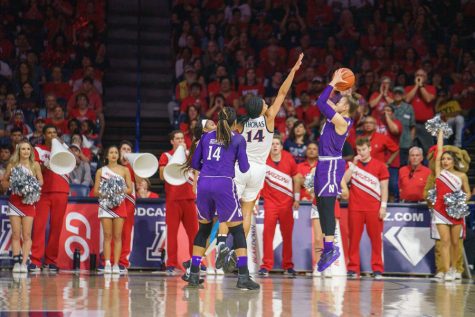 Northwestern’s women’s basketball team played the part of the underdog during its six-game 2019 WNIT tournament run in early spring, combining stretches of dominance and icy late-game shots en route to a runner-up tourney finish and the longest postseason run in program history.

Four of the six postseason contests were decided by single digits, and in two of the Wildcats’ victories — against Toledo and West Virginia — the team rallied back from deficits of 16 and 18 points respectively.

Sophomore Lindsey Pulliam emerged as a star during the competition, averaging over 18 points per game, and served as the team’s default option offensively in crucial situations down the stretch. Senior Pallas Kunaiyi-Akpanah was another key player in the team’s improbable tournament run, establishing herself as a serious threat on the boards.

The magical run ended in Tucson, Arizona, where a gassed NU squad couldn’t muster the fight to take down an Arizona team considered one of the best in the entire WNIT field.

Honorable mention: Sebastian Rivera winning first 20 decisions of the year before losing to the No. 1 wrestler in a higher weight class 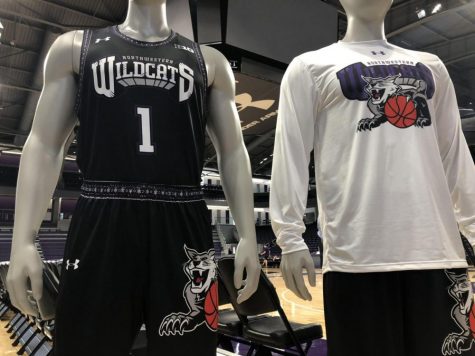 Northwestern has a nice arena, a well regarded coach and talented recruits like a lot of other Big Ten teams. But the most unique thing about the program is the new uniforms its seniors create every season.

For the second straight year, the senior class collaborated to design a one-time-only uniform that the team wore on Senior Day. This year’s black jerseys featured a Memphis Grizzlies-inspired Wildcat logo and the motto “Pound the Rock” in the uniform’s trim.

“We came up with the idea, and then we created a monster, ’cause once the underclassmen saw that the seniors got to create one, they said, ‘We’re going to do something better next year,’” Collins said when the jerseys were released. “It’s something that’s unique to our program, and something the senior class, they really enjoy putting together.”

The Cats lost the game against Purdue, 70-57, but the jerseys have created a legacy of their own. Sports business analyst and NU alum Darren Rovell’s tweet about the jerseys garned more than 2,700 likes, and UNISWAG named them one of the top five college basketball uniforms of the year.

How The Daily’s sports staff voted 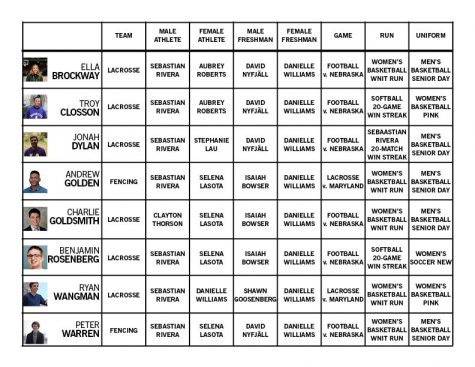