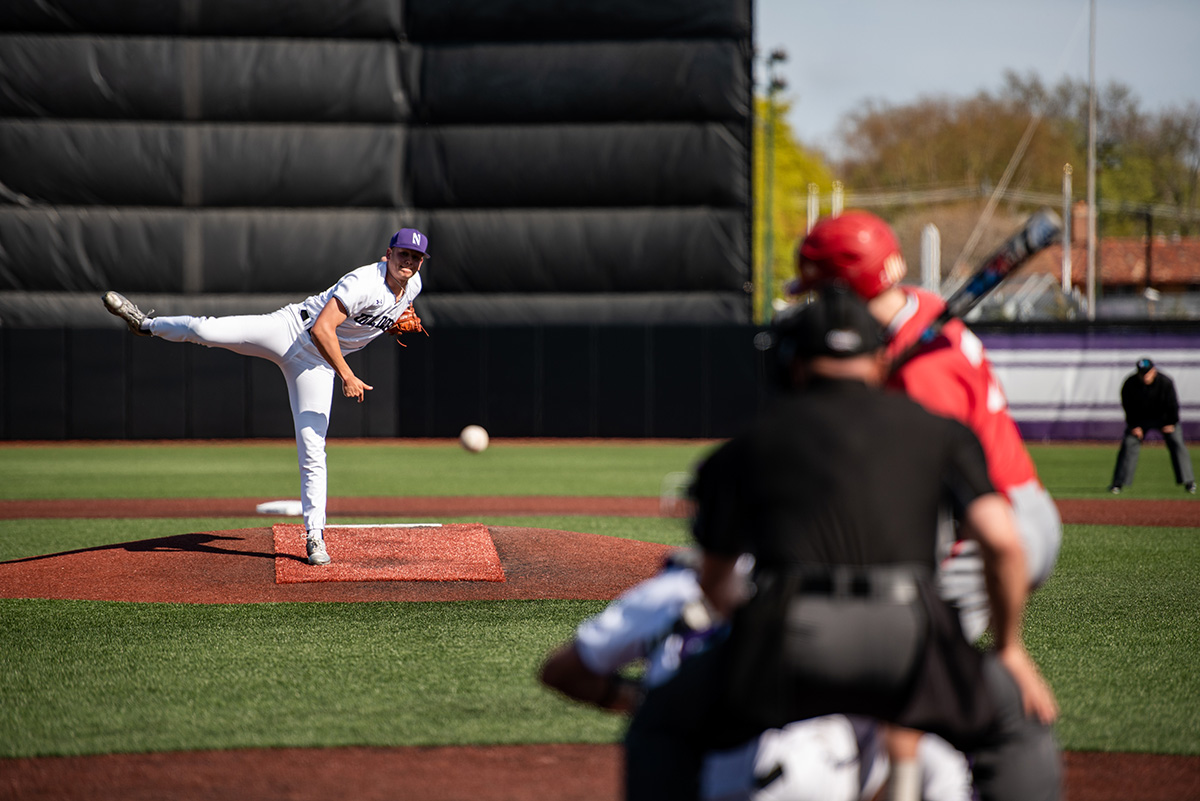 Nick Paciorek throws a strike. The junior right-hander led the Wildcats in strikeouts with 44 in only 26.2 innings. (Daily file photo by Evan Robinson-Johnson)

Nick Paciorek throws a strike. The junior right-hander led the Wildcats in strikeouts with 44 in only 26.2 innings.

Baseball: How Nick Paciorek went from backup catcher to shutdown closer in 13 months

Few first career pitching appearances are as unsanctimonious as Nick Paciorek’s debut on a college baseball mound in April 2018.

It was the final game of a miserable three-game series against Indiana. With two outs in the eighth inning of the series finale, the score was 19-1 in favor of the Hoosiers, and the Wildcats’ pitcher, JR Reimer, had just gotten hurt.

With the game out of hand, NU decided to bring on Paciorek, the backup catcher, to pitch. He walked the first batter he faced to load the bases, and then proceed to give up one run to three straight hitters via a hit-by-pitch, single and walk. It took until the fifth batter for Paciorek to get an inning-ending out.

Just over a year later, Paciorek found himself on the mound against Rutgers in the eighth inning with runners in scoring position, and finished the frame with a strikeout. But it was not mop-up duty in an embarrassing blowout. It was a 5-3 game with major playoff implications, and Paciorek was in not as an afterthought — he was in because he was the best pitcher for the job.

Paciorek is no longer a reserve catcher. He is a relief pitcher, and the best one on the Cats’ roster. When coach Spencer Allen needed an out this season, he called on Paciorek to get it done.

His progress since that first appearance 13 months ago is substantial. Not only did he switch from behind the dish to atop the bump, Paciroek developed so well that he finished the year as NU’s leader in ERA, games pitched and strikeouts — and his excellent season leaves little doubt he will be selected in the 2019 MLB Draft.

“I always had belief I could do it,” Paciorek said.

Paciorek was warming up with the catchers in the bullpen one day last spring when pitching coach Josh Reynolds saw him throwing off the mound. According to Paciorek, Reynolds said it looked “pretty natural” and wanted him to throw a bullpen.

The California native had played in 27 starts as a freshman, even drawing the start at catcher in the 2017 Big Ten Tournament Final. But up until that first appearance on the mound in Indiana, Paciorek had played in only two games as a catcher in 2018, after falling to third on the depth chart.

The team was aware of Paciorek’s strong arm from the moment he arrived in Evanston, Reynolds said, and were looking for different ways he could contribute for the Cats. They came to the conclusion that pitching, especially with his electric arm, might be the best option.

Paciorek threw in two more games last spring — both blowouts. His second appearance lasted 1.2 innings, but the right-hander gave up seven runs in a 26-15 loss to Western Michigan. His next time out was even worse — five runs on three hits, including two homers, while securing no outs in a 19-10 loss to Notre Dame. But even after that appearance, Allen expressed belief that Paciorek was on the path to success.

“He’s gonna be a good piece for us at some point out of the bullpen,” Allen said on May 15, 2018. “That will be more of his role, pitching a little bit. He will still catch and be a bullpen guy for us too. But we like his arm and his ability to throw the slider. He will be better for us moving forward.”

Allen was wrong about Paciorek catching — he has not caught a game since — but was right on the money about everything else.

Before Paciorek started his foray into pitching, he was placed on the Portland Pickles — a collegiate summer league team in the West Coast League — as a catcher. But NU alerted Portland about his potential move to the bullpen, and Paciorek went to Oregon with a his attention leaning towards the mound.

Even with his focus moving towards pitching, Paciorek hit every day, and Pickles manager Justin Barchus remembers being impressed immediately by Paciorek’s swing in batting practice.

“I couldn’t even watch his BP anymore because every time I watch it, I’d think ‘Why is this kid not in the lineup for us?’” Barchus said. “He’d hit five or six balls out. And not even close, not wall scrapers. I mean he hit them out of there.”

Paciorek never hit in a game — during the summer, he officially left the tools of ignorance behind for the solitude of the mound.

Barchus said the biggest mechanical adjustment the coaching staff worked on with Paciorek was his balance in his delivery. Yet, what Barchus felt pitching coach Zach Miller and the rest of the staff did best was help Paciorek understand how to stay in the moment.

Paciorek said he had trouble throwing strikes when he first started pitching. Barchus said Paciorek would miss a pitch, worry about the next pitch and then miss again. The Pickles staff worked to help him to not overcorrect after a miss but make enough of an adjustment so he would not miss twice in a row.

When he returned home from Portland, Paciorek met with Chuckie Fick, a former major league pitcher and family friend, for further guidance.

Fick had not seen Paciorek play since his days as a catcher in high school, but noticed some mechanical issues with Paciorek’s motion. Looking back, the former pro said the biggest problem he had was with squaring up his shoulders. Fick said the main priority was getting the angle of Paciorek’s shoulders to be flat or uphill instead of downhill.

The two also worked on helping Paciorek to finish over the front leg instead of around the leg to create more momentum and generate more velocity and spin on his pitches.

Fick said it takes a “special person, a special athlete and a special arm” to do what Paciorek has done. He saw Paciorek again over winter break, and said the difference in quality was “ridiculous.”

“The jump that he made — essentially going from no pitching at all to what he became — is what people spend thousands of dollars to do,” Fick said.

When Paciorek returned to Evanston, he was a much improved pitcher. But there was still work to be done.

Paciorek said he has tried to be a “sponge,” soaking in information from people he has interacted with throughout the process. He feels the experience he gains from every time he steps on the bump has been the biggest reason for his steps forward and added he is open to criticism and trying things. Reynolds said Paciorek is very quick to accept and implement changes.

In addition to continuing to learn and develop everyday, Paciorek’s work ethic and progress rubbed off on the Cats’ other players.

“He’s actually taught me a little bit more than I taught him, just with his whole composure,” junior right-hander Hank Christie said. “He looks like he’s been there his whole career. He’s throwing hard and he’s throwing strikes. For us, it’s just inspiring.”

One of the things that made Paciorek a good candidate for a transition is his fastball. Paciorek’s fastball sits in the low-90s and has clocked in at 95 miles per hour. Fick said that ability is “God-given.”

Fick added that Paciorek is a “prototypal power reliever” who knows how to pitch in-and-out and he has swing-and-miss stuff.

But Paciorek does not view his heater as his best pitch — instead, he said his slider is “100 percent” his best. Fick said Paciorek can manipulate the pitch so it can differ in movement depending on how he throws it.

While Paciorek made great strides during the offseason to make himself a late-inning weapon — D1Baseball.com ranked him as the No. 37 best prospect in the Big Ten before the season — he still needed to prove he was more than just potential.

“He just has a different mindset right now and has just flashed some really, really good stuff,” Allen said before the 2019 campaign began. “I’ve got a lot of confidence in Nick. Nick has a lot of confidence. But at the end of the day, he has not gotten anyone out consistently at this level. He’s got to go out and do it.”

Paciorek has gone out and done it.

The junior finished the season having pitched in 20 games with three saves and three wins. In 26.2 innings, he has a 3.37 ERA, .196 batting average against and 44 strikeouts for an astronomical average of 14.85 strikeouts per nine innings.

“Last year, I was just a thrower and this year I’m a pitcher,” Paciorek said. “I know what I’m doing out there. I know exactly what I need to do.”

It has not been all smooth sailing. In the first game he pitched this year, he left the mound in the bottom of the 10th after giving up a walk-off hit. A week later, he again gave up a walk-off hit, this time against Duke.

But Paciorek has pitched in a lot more wins than losses. NU won the aforementioned Rutgers game thanks to his work out of the pen. He closed out a victory in Durham after the walk-off the night before. And in his personal favorite game of the season, he pitched two shutout innings with four strikeouts to shutdown Georgia Tech — the eventual No. 3 overall seed in the NCAA Tournament.

“He’s special,” Fick said. “Guys don’t do what he did this quickly.”

Paciorek is still a work in progress. His command can come and go. He threw a changeup for the first time in a game against Notre Dame on May 14, and it was rocked for a single. He feels like he has not yet put it all together.

But soon, Paciorek may be facing professional hitters instead of collegiate batters.

Paciorek will be selected in the MLB Draft in June, and there is a good chance he receives a phone call on the second day of the draft — which features Rounds 3-10.

Baseball America rates the right-hander as the No. 229 best prospect in the country, with its scouting report saying that he is “athletic and has a good delivery,” and “pairs his fastball with a slider that has good shape and flashes plus potential with a chance to be a double-plus offering in the future.”

While Fick is not a part of the scouting industry, he said based off Paciorek’s numbers and arsenal, he believes the right-hander will be selected and sign with a team. He added that if he continues on his current path, he “has a chance.”

Paciorek said he does not know what will happen with the draft, but signing with a team is “definitely a consideration.”

“I always wanted to be a professional baseball player and I always thought it could happen,” Paciorek said. “I didn’t know it’d be on the mound, but I’m happy it’s that way. It worked out.”