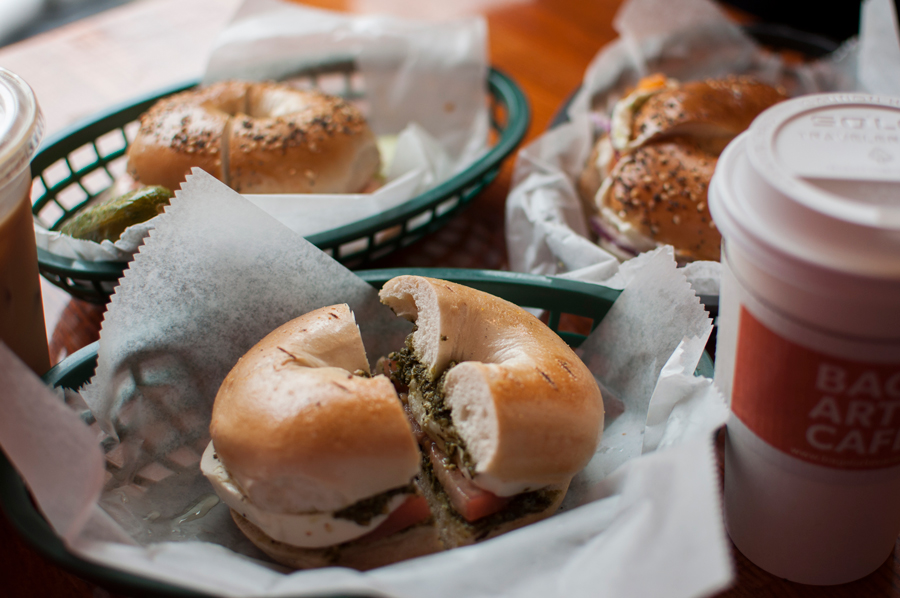 A selection of bagels from Bagel Art Cafe, 615 Dempster St.

Bagel Art Cafe is a New York escape in Illinois

I am a person who likes to mark all of life’s moments with food. Had a great day? Time to whip up a large bowl of spaghetti topped with red sauce and an ungodly mountain of grated parmesan. Really terrible day? A pint of Häagen-Dazs strawberry ice cream should do the trick. Hungover? A bacon, egg and cheese sandwich has been known to help me defy the odds. Any or all of the above? A bagel from Bagel Art Cafe, at 615 Dempster St., is the go-to.

Bagel Art satisfies my need for a carb-filled Saturday breakfast and gets me through a finals week-induced writer’s block. It’s quick enough to grab a bite to-go on a weekday morning, but also has ample seating if I want to get some coffee and sit while digging in. I now frequent the shop so often that I’m starting to believe the people at the counter remember me when they offer their always-friendly smiles. This is big, considering I came to college from New York thinking I would never find a good bagel in the Midwest, let alone just a few minutes down the road in Evanston. I am not going to claim that Bagel Art is the perfect bagel, but it is very good for a shop that is roughly 800 miles west of what I consider Bagel Central.

The cafe, tucked on the corner of Dempster and Sherman, looks like a classic bagel shop with baskets of bagels hanging on the wall and tubs of various cream cheeses — plain, lox, veggie, chive and strawberry — sitting behind the counter. While they serve up a variety of bagels, sandwiches, salads and pastries, along with reliably-good Intelligentsia coffee, the bagels are really what you should be there for. A classic everything bagel with cream cheese from Bagel Art can almost (almost) transport me from Illinois all the way back to New York. It reminds me that bagels are my panacea, the easy answer to every mood.

Aside from the basic bagel and schmear, Bagel Art has a few more inventive bagel sandwich options. For a sweeter morning, the Cinnamon Toast (raisin bagel, cream cheese and cinnamon sugar, served open-faced) tastes like Cinnamon Toast Crunch in bagel form. The Early Bird (veggie cream cheese, bacon, egg, swiss cheese) is one of many egg sandwiches on the menu, and while the combination sounds like it shouldn’t work, I promise it does. I mainly attribute this to the veggie cream cheese, perfectly studded with chopped vegetables that add a solid crunch to every bite. It’s probably not the cheapest bagel in town — basic bagels range from $3.25 to $4.95 and egg sandwiches from $3.75 to $5.75. It is, however, definitely the best.

Bagel Art’s location is far from ideal for the Northwestern student on foot, but it makes for a nice weekend morning stroll into the Main-Dempster Mile, a part of Evanston that often goes overlooked by students. Alternatively, remember that kid in your discussion section who you’re pretty sure has a car? Hit them up for a ride south to Bagel Art. The bagels will (probably) make up for the awkward journey.