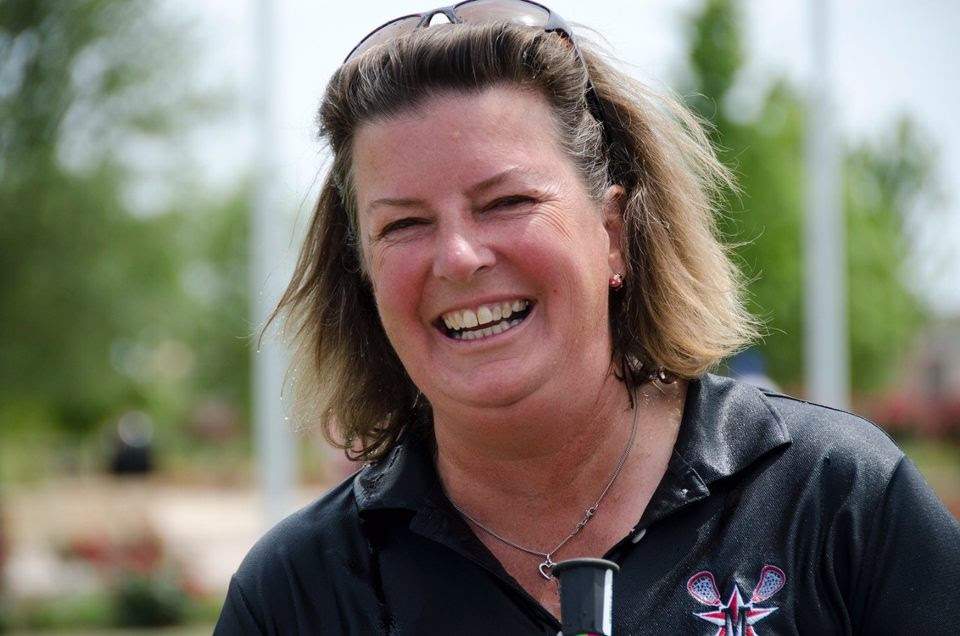 The late Angie Kensinger. Kensinger, the longtime coach at the St. John’s School in Houston and a beloved figure in the lacrosse world, died in a plane crash on April 22. (Courtesy: St. John's School)

The late Angie Kensinger. Kensinger, the longtime coach at the St. John’s School in Houston and a beloved figure in the lacrosse world, died in a plane crash on April 22.

It was impossible to watch last Sunday’s Big Ten Tournament final between No. 1 Maryland and No. 5 Northwestern without noticing the pigeon.

The bird stayed on the field for the entire game, flying around, fluttering in the faces of players and even perching atop the Wildcats’ goal. It became a hashtag on Instagram: #LaxPigeon. It became, jokingly, an excuse, as the Terrapins lacrosse Twitter account posted a score update when NU was up 15-9 in the second half with the kicker “We blame the pigeon.”

Just when you thought you have seen everything in lacrosse, let me introduce you to “The” Homewood Homing Lacrosse Pigeon #LaxPigeon … move over Blue Jay, a Star ⭐️ is born on the B1GTen Network. Comment below ….

In the heat of the team’s biggest game of the season, coach Kelly Amonte Hiller found senior defender Nell Copeland on the sideline and pointed toward the bird.

Coach K was Angie Kensinger, the longtime head girls lacrosse coach at the St. John’s School in Houston, the alma mater of Copeland and three other current Cats. Kensinger and her husband, Stuart, died in a plane crash in Texas on April 22, and two weeks later, hearts around the lacrosse world were still heavy.

Copeland knew exactly what Amonte Hiller meant. She had been guarding a Maryland player when the bird flew between them, forcing her opponent to drop the ball, and was convinced that its presence was more than just a coincidence. Lindsey McKone, a junior attacker and a 2016 St. John’s graduate, swore the bird was “Coach K, Mr. Coach K, or both of them.”

The pigeon stayed on the field until the very end of the game, when the final horn sounded and NU claimed its first win over Maryland in seven years, and its first-ever Big Ten title. It was a milestone moment in the program’s history, and the pigeon, the Cats insisted, was a part of it — a sign, McKone said, that someone was looking down on them.

In more than 20 years coaching at St. John’s, Kensinger won 11 conference and 12 state championships, all while successfully guiding dozens of players into the college ranks. In the past eight years, she’d sent five players from St. John’s to NU — Jessica Carroll, who played for the Cats from 2012 to 2015, and current players McKone, Nell Copeland, sophomore defender Carson Copeland and sophomore midfielder Kate Copeland.

“She wasn’t trying to get us to go to Northwestern for glory or anything or to make her look like this coach who sent multiple girls to play at one of the top programs in the country,” Nell Copeland said. “She wanted what was best for us.”

In Texas, a state where an East Coast-centric sport like lacrosse was still growing, Kensinger was a pioneer.

“The biggest thing that I was struck with, as a college coach, is just really how, no matter if it was one of her kids or like someone that didn’t play for her, she was just so genuinely trying to help the kids from the Texas area get to play in college,” Amonte Hiller said. “She was really into developing people and getting them to find their niche and their passions and their strengths inside themselves.”

Kensinger’s relationship with the NU program didn’t stop when the recruiting process ended. She co-ran one of Amonte Hiller’s camps in Houston, and made numerous trips to Evanston — including a handful this season — to watch the Cats.

She had followed the team’s success this year, her former players said, always texting them after games to tell them how proud she was of what they’d been able to accomplish, and how excited she was to keep watching.

Amonte Hiller recalled hearing how after NU clinched top-10 wins over Michigan and Notre Dame in April, Kensinger talked with McKone’s mother, full of excitement about the direction in which the Cats’ season was heading.

“They had just been talking on the phone, and (Kensinger) said that she booked hotels for the Final Four, just in case,” Amonte Hiller said. “That just speaks to her link to the program. She was like family.”

It’s been three years since she played her final game for St. John’s, but McKone still vividly remembers the captains’ lunches at Kensinger’s house, and her personality — she pictures Kensinger giving advice to the players before a game, and then dancing.

Nell Copeland remembers the boxes of cookies that Kensinger would personally deliver to each player’s house every Christmas, and how she knew that if she wanted to play lacrosse in college, she had to play for Coach K.

Kate Copeland remembers the texts Kensinger would send her, before and after she left for college, about anything from lacrosse to career advice to what classes she was taking at NU.

“She was just like a second mother to me,” Kate Copeland said. “She was this figure who was really influential in my life, and she was able to shape who I am now. She’s honestly the reason why I’m at Northwestern.”

Dating back to when Carroll first arrived in Evanston in 2012, eight years of NU teams came to know Kensinger. Many of the older players on this year’s squad had met Kensinger on her trips to Evanston, and after her passing, the team gathered in the locker room and encouraged the St. John’s alums to share their memories and stories.

The Cats all wore athletic tape on their wrists to honor Kensinger in their first game after her death — a 17-12 win over Ohio State to close out the regular season on April 25. The players understand the impact that Kensinger left, even if they themselves didn’t go to St. John’s.

“We’re really fortunate that we got the opportunity to go to a school that understands that, and has such a pipeline through St. John’s,” McKone said. “We’re really lucky that people can understand the impact that she had not only on our lives, but on the sport of lacrosse, especially being from Texas.”

They’ve even tried to incorporate a little bit of Houston into their practices and games in recent weeks. Every year during the first week of May at St. John’s, Kensinger would lead a themed practice called “Cinco de Michael,” complete with piñatas, tortillas, Mexican candy and Michael Jackson music. The day before the Big Ten Tournament final, the Cats held their own Cinco de Michael practice.

Through the end of the regular season and the conference tournament, they emphasized Kensinger’s lessons of playing with dignity, grace and above all, having fun.

“She introduced (lacrosse) to us as more of a method of just really enjoying ourselves, having fun, building relationships and friendships,” Carson Copeland said. “It’s amazing that me, Kate, Nell and Lindsey all ended up in the same place, and that Coach K, we literally would not be here and we wouldn’t be best friends without her.”

After Kensinger’s death, Carson Copeland bought sets of ladybug-patterned shoelaces for herself and the other St. John’s alums.

Ladybugs were a Kensinger trademark — she used to take her St. John’s teams on spring break trips to Vero Beach, Florida, where her mother lived on Ladybug Lane, and the program adopted ladybugs as its second mascot.

Before big games, Kensinger would bring bags of live ladybugs to practice, and her players would release them in the center circle so that every time they lined up for a draw, they would see a ladybug.

The shoelaces were a way for the Houston-area players to carry Kensinger’s memory with them through the end of NU’s season. After Copeland’s first purchase, Amonte Hiller bought ladybug laces for the entire team, so that everyone would be able to honor her legacy.

With ladybugs on their cleats, their sneakers and their backpacks, both the Kensingers will be on the Cats’ minds as they begin their NCAA Tournament run Sunday. NU, the fourth-seeded team in the tournament, will play Notre Dame in its second-round matchup at Martin Stadium.

“It gives them perspective of how special each day is and gives them a great sense of gratitude for what we have,” Amonte Hiller said. “And right now, all we have is one week. We have one week together, and we’ve got to play as hard as we can on Sunday so that we can get another week together.”

Kensinger may not be there in person, but her impact will be there in the way she taught her players to take the field with dignity, grace and character, Kate Copeland said. The Cats may not have a pigeon on the field with them when they face the Fighting Irish, but they’ve seen her in smaller ways, too.

At practice the Saturday before the final against Maryland, senior attacker Selena Lasota found something on her stick, and called the rest of the team over to see what it was.

It was a ladybug.