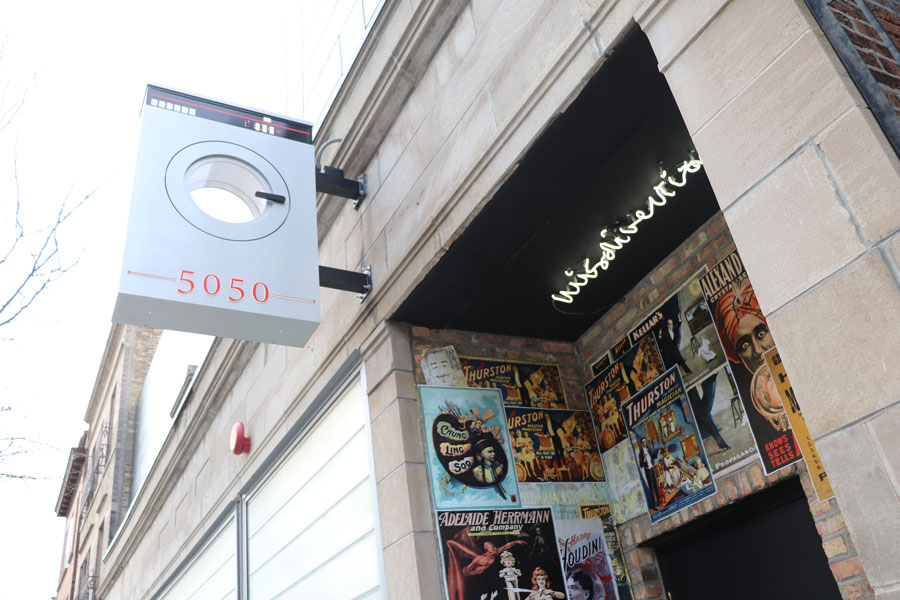 The exterior of the Chicago Magic Lounge. The magic bar pays tribute to close-up magic, a style that originated in Chicago. (Emily Chaiet/The Daily Northwestern)

The exterior of the Chicago Magic Lounge. The magic bar pays tribute to close-up magic, a style that originated in Chicago.

When first I approached the Chicago Magic Lounge, I thought I had arrived at the wrong place. Instead of the entrance to a fantastical magic show, I was met with the door to a rather dingy laundromat. Had I gotten the address wrong? I checked the “Maps” app on my phone another time, only to find I was in fact at the right place.

I walked into the shop to see nothing but washers and dryers. But this was a magic lounge after all, and what is more magical than a secret entrance? After opening one of the door-sized washers, I walked inside the dimly-lit room.

Inside, posters of famous magicians filled the walls. To my right was a library full of red velvet chairs and bookshelves stacked with magic books; to my left was a crowded bar where a magician was performing live magic. The crowd sipped on drinks (with charming names like “How Houdini Died”) as they laughed, gasped and clapped.

Being a magic fan myself, I needed to see how good this bar magician truly was. He had a thick mustache and slicked-back hair, matching the vintage vibe of the bar and lounge. The magician cracked joke after joke, drank beer from a minuscule mug and performed tricks right on the bar. The tricks were simple — this was only the “appetizer” to the real show — but still impressive. For example, he asked me to hold my hand out and placed a small, plush bunny in it. He asked me to squeeze tight before telling me he would make the bunny travel from my hand to his. Feeling the bunny still in my fist, I thought the trick had failed. When I opened my hand, however, 10 smaller bunnies popped out, revealing its true purpose — another tease typical of a good magician. When it comes to the Chicago Magic Lounge, what you see is not what you get.

Finally, it was time to enter the actual show, where patrons had to purchase tickets. We stood in line waiting, but no door could be found until the host grabbed a book from a shelf and suddenly, the fireplace revealed a hidden door. Beyond it was a lounge, which, with its small space and Art Deco architecture, looked like a speakeasy. The room was small and intimate, with tables surrounded by four chairs. Any seat provided a perfect view of the curtain-drawn stage.

There was still an hour till the show began, but we would not be waiting unentertained. As I ordered food and drinks, magicians came to perform up-close magic, also known as “Chicago-style” magic, at my table. This style first became popular in 1915 when magic bars began opening in Chicago. Although the last magic bar in Chicago closed in 1999, The Chicago Magic Lounge opened in 2015 to bring this style of magic back to where it first originated.

The lights dimmed and the pianist began playing, cueing the beginning of the show. The first act was mentalist Jason Suran, who was one of the most talented magicians I have ever seen. The intimate space made audience members an integral part of the show, including myself. I was called up on stage during his final act, along with a woman sitting at the table next to me. I stepped on the stage, glaring into the bright lights until he told me to close my eyes.

As Suran began the act, I felt a touch on my arm and the audience gasped, but I didn’t know why. He shook my arm and again the audience gasped, but I was still left in the dark. When I opened my eyes, Suran revealed the trick to myself and the other woman on stage: he had been touching and moving only my arm, yet the other woman felt the touch and moved her arm as well. Wondering how he performed that trick still keeps me up at night.

The headlining act was Ran’D Shine, a well-known magician who had once performed in front of former president Barack Obama. He constantly made the audience a part of the act, inviting multiple people on stage, interacting with viewers and making plenty of jokes. He was the most stereotypical magician out of all of them, performing more stage-style tricks — like turning a $100 bill into a $1 bill. His best trick, however, was stealing someone’s credit card while his fingers were cuffed together.

Under the spell of these two magicians, I laughed, gasped and questioned just how they were able to pull off these intricate tricks. I have loved magic since I was young, and that love was revived within one night.

No other magic show I have seen is quite as intimate and entertaining as the Chicago Magic Lounge. It is not just a show, but an experience. Magic exists in every aspect of the vintage-inspired lounge, from the hidden entrances to the endless supply of performers. I’d recommend The Chicago Magic Lounge to anyone — not only has it brought magic back to Chicago, but it has made me believe in magic again.